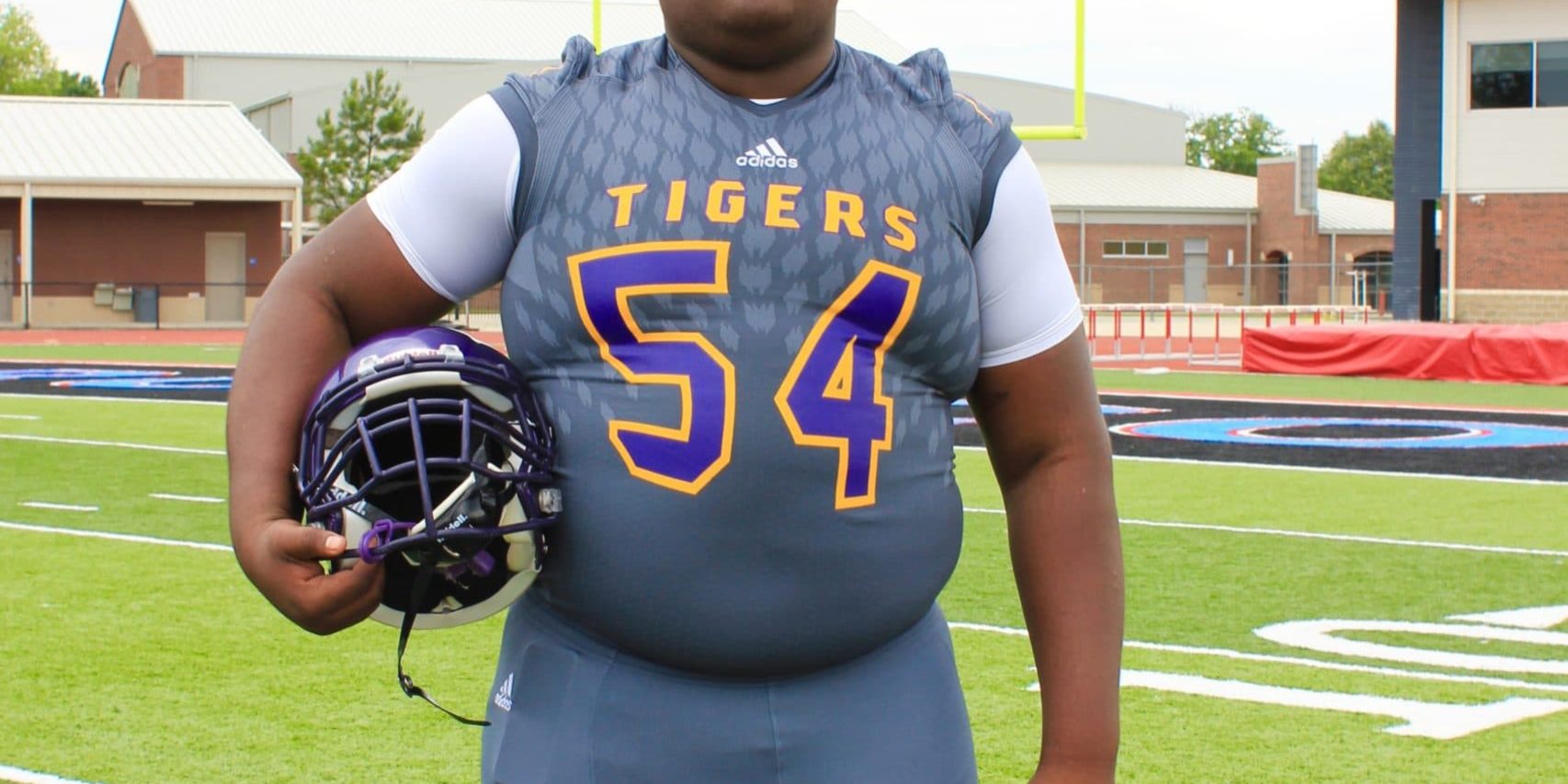 For the first time since 1995, the Logansport Tigers went back to the Superdome and captured the state championship. Under Head Coach Kevin Magee, who was the quarterback for the 1995 Logansport state championship team, the Tigers had a perfect season going 14-0 and defeating one of the best football programs in Haynesville to clinch a state championship. In order to have an undefeated team, there has to be good coaching along with really good players. For a 1A program, there has to be a lot of guys that can produce on both sides of the football. One of those guys was Logansport senior DT Langston Murray. Championship teams must have guys that can play on both lines of scrimmage. Murray was the anchor for the Tiger football team as he started as both an offensive lineman and a defensive lineman. Even though Murray played both ways, he made his living stuffing run plays and making sure that the running game was not going to be easy on the Tigers’ defensive front. At 6’2 and over 300 pounds, Murray has the strength to take on double teams and disrupt offensive plays, but at the same time, has the speed to run down ball carriers. He even ran for over 40 yards in a game as a wildcat quarterback. Before this season, he was named on our 1st All-Louisiana team as a defensive lineman. Murray lived up to expectations as he had a great individual season while helping lead the Tigers to one of the best seasons in their program’s history. Louisiana Football Magazine Editor/T.V. Host/Scout Lee Brecheen knew that a lucky team was going to pick up this talented senior lineman in the end.

“Langston Murray is one of the strongest defensive tackles in the state,” Langston benches over 400 lbs. and squats over 500 lbs. He has a NFL future.”

Langston Murray has a lot of potential and a lot of talent, but there is no question that he can help a team win football games with his experience already at Logansport High School. The University of New Mexico got Langston Murray in the end over other teams such as UTSA and ULM. It is the first time that the Lobos got themselves a signee from the state of Louisiana for this season, and they got themselves a very good one. In today’s recruit spotlight, the New Mexico signee talked about Logansports’ magical season, his skills as a football player, the reason why he chose New Mexico in the end, and so much more!

LAFM: What are your stats and accomplishments while at Logansport?

I finished with 92 tackles, six sacks, and 15 tackles for loss.

LAFM: You decided to sign with New Mexico in the end over other teams such as Louisiana Monroe and UTSA. What is it about the Lobos that helped you make your decision in the end?

I went out there and it was obviously a different culture, but I liked it. I was up for something new, and it was the best way that I thought that I could better myself for what I need to be later on in life. I also have a good relationship with the coaches, and I plan on being named All-Conference in the Mountain West. It was the relationship with the coaches that really set them apart and helped me sign with them in the end.

The biggest strengths, to my game, is my run defense because I can close gaps. I can be an one gap and put my man in the other one. I also have a very quick and powerful first step. I love to push and pull. I also played both ways so I can play as a defensive lineman or an offensive lineman. I just want to win and I will play wherever my team needs me to play.

LAFM: What are some things that you need to improve on when you get to New Mexico?

LAFM: Let’s talk about the season. The Tigers had a great season going undefeated and winning the state championship. When did you realize that this team was so special?

I realized that this team was going to have a special season after we beat Mansfield. It wasn’t like Mansfield was a big win for us, but it just showed how we could fight adversity despite being down or not blowing an opponent out early. When I saw this team fight and come back to win games like against Mansfield as well as Bossier, that is when I realized that this was what we were missing. The year before this year, we were good, but when we were losing, that was when we stopped playing. This year, I just saw the fight in these guys.

I want to give a shout out to my younger guys Demicko Gray, John Stephens,  Felix Coleman, and Madrid Johnson Jr. Those are some key players that have been freshmen and sophomores, but had made a big impact. The sky is the limit for those guys, and those are guys that I look at as young guys. I want to see them make it.

LAFM: In speaking of next year’s team, what is your advice for your former teammates on next season?

My advice, to them, is to stay focus and be the leader. It’s easy to get lost when the team captain graduates, but somebody needs to step up and be the leader. Also, never be satisfied and keep working hard. We won the state championship in 2016, but last year has moved on. There is another state championship in 2017, and you got to win that one too. Never get complacent with what you already got.

LAFM: What was your best game while at Logansport and why?

My best game had to be the Mansfield game. The reason that I said that is because when you are in a rivalry game, you usually do more than you usually do. I was playing my heart out and I did those things that I needed to improve on at that game such as my closing speed, pressuring, and running down the quarterback.

When the football season is over, obviously, you want to perfect your craft, but I play Madden and be around my teammates or family 24/7.

LAFM: Who is the college or NFL defensive lineman that you watched in order to improve on your game?

I sing for the choir in my Church.

LAFM: You were named to our All-Louisiana team at the beginning of the season and were a defensive honorable mention at the end of the season. What does it mean for you to be recognized as one of the best players at your position in a state that is known for sending players to the next level?

It’s an honor to have that accolade. I just feel great to have it, and it just drives me to work harder every day. It motivates me to do the extra run, the extra push up, and continue to better myself because I can’t stop. I still feel that I need something to prove. I just want to prove that coming out of a 1A school that I am the guy that they are looking for.

LAFM: What are you going to miss most about playing football at Logansport?

I am going to miss the fans the most. These people stand behind myself as well as my teammates like nobody else. At every game and every event, they are there in full effect. They bring air horns, cow bells, and everything else supporting us. Our whole side of the Superdome was packed with Logansport Tigers. There were so many cheerleaders, parents, classmates, and everybody else that were out there the whole time supporting us.

LAFM: Who are the people that you like to thank for putting you in the position that you are in today?

First off, I want to thank God. Without him, none of this is possible. I want to thank Coach Magee and Coach Smith for opening the gates for me. Sometimes, it is not easy being at a 1A school and still getting the publicity that you deserve and might need sometimes to go where you want to go. I also want to thank Coach Oliver for helping me improve my game and teaching me things that I will need for the long run.

LAFM: Why should New Mexico fans be excited to have you on their football team?