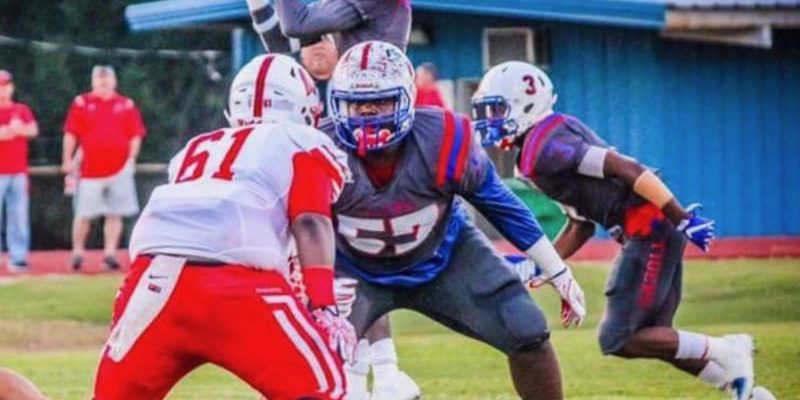 The Jonesboro-Hodge football team has a key-player in defensive tackle Kelton Moss to compliment their defense. Moss compliments the Tigers team with size, speed, and determination. Just watching him play, one can see his determination by the execution of his tackles and ability to pursue and get into the defensive backfield. At a position in which it is hard to rack up a lot of tackles, Moss managed to obtain 112 tackles his junior year. This season should not be any different. Kelton Moss’ athleticism was recognized by being selected the Jonesboro-Hodge Defensive “Football Player of the Game” in a game against Winnfield last season. Moss was also All-District in 2016. Kelton Moss has also participated in the Tigers’ varsity basketball and track and field team last year. Not a lot of people have heard of Moss, but Louisiana Football Magazine recruiting expert Lee Brecheen believes that he is a big time sleeper.

“Kelton Moss is a big time defensive tackle,” Brecheen said. “He has great feet and is very strong as well.”

Even though the Tigers have a slow start to the season at 1-3, the team had to play a very tough schedule in those first four games playing against teams such as Logansport, Tioga, Haynesville, and Winnfield. That is a tough schedule for a 3A team much less a 1A team. Still, the Tigers hope to get to the playoffs again this season with guidance from Coach Terrance Blankenship in his 6th year of coaching. With strong players like Moss leading the way, that is all you need in 1A ball to be successful. On Friday Sept. 29, the Tigers have the chance to prove themselves in an away conference game at Lincoln Prep (Grambling, LA) at 7 P.M. In today’s recruit spotlight, we caught up with the All-District Defensive Tackle from Jonesboro-Hodge as he talked about his breakout junior season, the start to this season, the player he models his game after, and so much more!

My biggest strengths are recognizing plays and finding the ball.

DE and I love that position because I can do whatever. I just play my game.

LAFM: What were your most memorable accomplishments while at Jonesboro-Hodge High School?

Getting 112 tackles my junior year and coming back this year too see if I can get even higher.

I love to cook and my favorite is chicken lol!

LAFM: The Tigers lost their home playoff game against Pine by a score of 15-14.What are your thoughts on how the end of the season turned out as well as what improvements should be made for this year’s season?

Well, it hurts really bad. You know, it was our first time we had a winnable game and we let it slip away and the improvements that should be made is capitalize on the other team mistakes

I don’t exactly know. I just go out and play my game.

LAFM: What are some things that you have picked up from Coach Blankenship that has helped you in your game today?

Give your best effort and if you make a mistake, do it 110% because you never know what will happen.

LAFM: What is your advice for next year’s Jonesboro-Hodge football team?

Treat practice like a game because the game is not won on Fridays, it’s won during the week.

No, I’m currently working on my ACT score so they can come knocking on my door.

I need to improve on my hand placement and footwork. It’s ok, but not great, and I want to be great someday.

J.J. Watt (Wisconsin/Houston Texans) is who I will like to model my game after because he’s a leader and he doesn’t make excuses. He gets the job done.

Man, it’s a lot. I want to thank God for giving me the ability to play this game. I want to thank my mom really because she makes me work hard. Growing up if I didn’t have the grades, she would snatch me off the team, and that’s what really made me a hard worker. I also want to thank Christopher for trying to help me with everything including things that’s not dealing with sports. I just want to thank everyone.