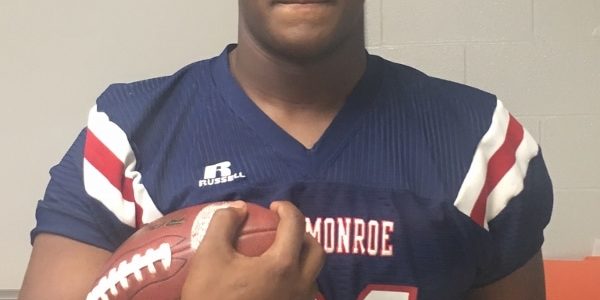 West Monroe fans were hoping that their team would get back to the Superdome and once again be a football powerhouse like it had been when the late, great Don Shows led the program. West Monroe fans got their wish when their team made it back to the Superdome for the first time with Jerry Arledge as head coach and since 2011. The team was led by a balanced offense as well as an aggressive defense. The Rebels’ defense was led by two of the linebackers in the state in senior LB Jacob Adams and junior LB John Bailey Gullatt. Even though the two star linebackers made most of the tackles, they might have not been the defensive players that offensive coordinators were keying on. West Monroe senior DE Dennis Collins was one of the best defensive linemen in North Louisiana, which is an area that is known for producing some great defensive linemen in the past. Collins is not only big and athletic, but he is a really smart football player as well. He is a complete defensive end that can rush the passer as well as stop the run. Collins also does a great job of not over pursuing plays like a lot of defensive linemen do. His size, athleticism, and football smarts have helped him acquire many individual accomplishments as well as helped guide his team back to the Mercedes Benz Superdome. Dennis Collins is another name that will be added to the great names of West Monroe football when it comes to playing football at the collegiate level. Not only will he be playing college football, but he will be playing at the highest classification in Division I. Collins has received a lot of offers from major schools and in the end, he has decided to take his talents to TCU where he will play for defensive minded head coach Gary Patterson. We caught up with the future TCU Horned Frog as he talked about his high school career, the reason why he chose TCU, leading the Rebels to the Superdome, and so much more in today’s recruit spotlight!

LAFM: What are your stats and accomplishments over you West Monroe career?

I made All State, All-District a couple of times, and All-Area a few times. In my senior year, I had nine sacks and over 70 tackles.

LAFM: You are going to play for TCU next season. What has helped make your decision to play football at TCU and what makes you excited about the program?

First off, I visited the school with my parents. I just felt at home there, and I am excited to play at a great football program like TCU.

LAFM: What are some of your strengths as a defensive end?

I have really good feet and am very quick for my size.

LAFM: What do you need to improve on when you get to TCU?

You can never be too fast to play football so I can always try to get faster and quicker. I can also be more of a student of the game.

LAFM: This season, the team made it back to the Superdome for the first time since the Don Shows era. Even though the result was not what the team was expecting, how big was this season to put West Monroe right back on the map?

It was big. Some of these younger guys will know what it takes to go back there next season. They are going to be even more hungry to get back there.

LAFM: Who are the college or NFL defensive ends that you watch and model your game after?

The NFL defensive end that I model my game after is Olivier Vernon (former Miami Dolphins DE currently with the New York Giants). I also like to watch Derek Barnett (Tennessee Volunteers DE that has entered the NFL Draft).

LAFM: You have played against a lot of great offensive players in the state especially in the North Louisiana area. Who are some of the best players that you played against that jump out in your mind?

De’Vion Warren (Ouachita Parish senior QB and Arkansas signee) and Jaiden Cole (Neville senior QB and Louisiana Tech signee) were two of the best offensive players that I played against.

My favorite game was the semi-final game this season against Zachary because it was the game that was going to determine who was going to go to the Superdome.

LAFM: Who are some of the people that you want to thank for helping you be in the position that you are in today?

Of course, I want to thank my parents. I also want to thank Coach Hill and Coach Arledge as well for helping me be where I am today.

LAFM: If you had to play one more game at West Monroe, what team would you pick and why?

I would pick Landry Walker to get another shot at them after losing to them in the state championship.

LAFM: What is your advice to next year’s West Monroe team?

Listen to the coaches and be comfortable.

There is nothing like winning games on Friday nights. I am going to miss it.

LAFM: Why should TCU Horned Frog fans be excited to have you on their football team?