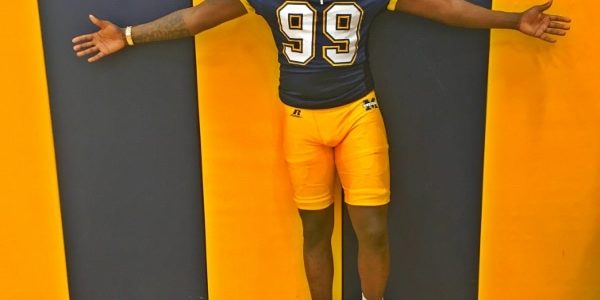 In the state, there are a lot of talented pass rushers. There might not be a more intimating pass rusher than Madison Prep DE and Houston commit Bryan Jones. Jones is a physical specimen at 6’5 and over 240 pounds. His entire wingspan is probably over seven feet due to his long arms. Bryan Jones was part of a Madison Prep squad that looked like they were going to walk their way to a state championship until they lost in an upset to Sterlington in the Superdome. Even though the Chargers were expected to win the state championship, it still was a great season for a team that has not been around for long. Thanks to Bryan Jones and his other talented teammates, the Chargers had the best season of their young program’s history.  In his senior season, he was a nightmare for opposing quarterbacks and running backs as he posted almost 80 tackles, 13 sacks, and six tackles behind the line of scrimmage. After the season, the talented defensive end’s focus came on National Signing Day where he had to make a decision on where he was going to continue his promising football career that is just getting started. Jones had to decide from big time D-I schools such as Texas A&M, Ole Miss, Mississippi State, and Houston, but Jones decided to go to the school that is not in the SEC in the University of Houston. Louisiana Football Magazine Editor and T.V. Host Lee Brecheen had this to say about the athletic defensive end when he was named to our 2nd All-Louisiana team before the season started.

“Nobody looks the part better than Bryan Jones from Madison Prep,” Brecheen said. ” Jones is a physical specimen freak. The only thing is that he needs to continue learning the game because he is new and raw.”

The scary thing about Jones is that he still improving his game and that is not good news for any offenses that will be playing the Houston Cougars in the future. In today’s recruit spotlight, Madison Prep DE Bryan Jones talks about his high school career, falling short in the Superdome, the reason he picked the University of Houston, the player he models his game after, and so much more!

After being offered by many schools, Madison Prep DE Bryan Jones decided to take his talents to the University of Houston. (Photo credit goes to Cadence Winn)

LAFM: What are your accomplishments while at Madison Prep?

My accomplishments, that I achieved, while at Madison Prep, was being a dominant football player and a top recruit in the state.

LAFM: You have signed with Houston to play football. What made you decide Houston over some pretty good SEC schools?

That’s where I felt at home, and my family loved it. I also fit their scheme, and their defense is perfect.

LAFM: What are your strengths as a defensive end?

My arms, my get offs, getting to the quarterback, and pass rushing are my strengths as a defensive end.

LAFM: What are some areas to your game that you still are trying to improve on?

I need to get faster on my get offs as well as my explosiveness.

LAFM: It was a fantastic season for Madison Prep, but the team lost in the state championship game against Sterlington. How crushing was that loss and what did you think was the reason the team lost the game?

The loss crushed my heart. I think we should have slowed the game down and take our time to kick the field goal to tie and then, win it in overtime.

LAFM: What was your best game while at Madison Prep?

Even though we lost, it was the state championship because it was our first shot at the trophy.

LAFM: Who was the best offensive lineman that you played against?

I would say Dare Rosenthal (Ferriday offensive tackle). We both competed against each other.

LAFM: What artists that you like to listen to before a game?

LAFM: Who is the college or NFL defensive lineman that you model your game after?

Arden Key (current LSU defensive end). I believe he is the best pass rusher in the country.

I like to train and hang out with my family.

Take your time and go somewhere where you are wanted not needed.

I want to give a shout out to my mom Natalia, my dad Bryan, my grandparents, my grandmother Terry, and my uncle Eric.

LAFM: Is there anybody in your family that has played high school, college, or even professionally?

No. I will be the first out of my whole family to play football.

LAFM: What is some advice that you like to give to next year’s Madison Prep team?

LAFM: Why should Houston be excited to have you on their football team?

Houston fans should be excited about having me on their team because our team is going to have a big time year next season.