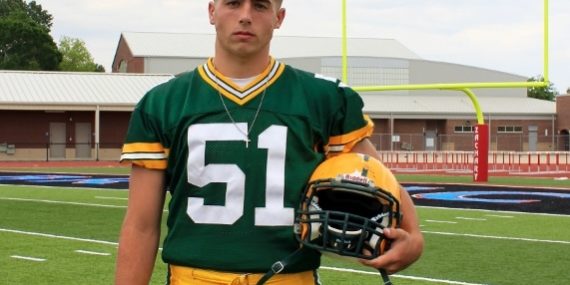 After the Cecilia Bulldogs lost superstar running back Raymond Calias, who was our 2015 LAFM 4A Offensive Player of the Year and currently playing for the Ragin’ Cajuns of the University of Louisiana-Lafayette as well as longtime Cecilia head coach Terry Martin, the team needed a leader and a playmaker to step up in order for them to have another successful season. That player had to come on the defensive side of the football in Cecilia DE Braylon Daigle. At 6’5, 235, Daigle showed the ability to completely throw a quarterback’s game off as well as an entire offensive gameplan. The career sacks may not be overly impressive with 15 overall, but don’t let the numbers fool you. The senior pass rusher can definitely put pressure on the quarterback. Daigle is in the backfield constantly hitting the quarterback and making tackles in the backfield. In order to be a complete defensive end, a player must be able to find the balance of being aggressive as well as playing smart and not over pursuing plays. That is what Daigle does as he is a great football player against the run as well as the pass. Daigle has also showed that he can completely take over a football game even on the biggest stage. In his last game playing for the Bulldogs, the senior Cecilia defensive end constantly got pressure on Edna Karr senior QB and Arkansas State signee Aldon Clark registering three sacks, a forced fumble, and 13 tackles. Even though it was a great individual effort by Braylon Daigle, it still was not enough to defeat the heavily loaded and eventual 4A state champion Edna Karr Cougars as the Bulldogs finished the season at 6-5. After a high school career that included winning district defensive MVP, making 1st Team All-District, and 2nd Team All-State, the talented and versatile defensive end will take his talents to Northwestern State University. In today’s recruit article, we caught up with the Northwestern State signee as he talked about his high school football career, his favorite moments playing for Cecilia, the reason why he chose the Demons, and so much more!

LAFM: What are your stats and accomplishments while at Cecilia?

I have been a starter since halfway through my sophomore season all the way up to my senior season. Over my career, I had 15 sacks, 180 total tackles, been named District Defensive MVP as well as 1st Team All-District, and 2nd Team All-State.

LAFM: You have signed with Northwestern State to play football at the next level. What is it about the Demons that has attracted your attention to sign with them?

Northwestern State is a fantastic school, but what sold me out was the way they treated me. From the minute I was texted from them, I felt wanted by them, which is a great feeling.

I have a feel for what’s around me at all times. I’m a ball tracker as well as a great pass rusher and head hunter. I also don’t give up on every play.

I need to obviously get stronger and play with my hands better. You can always learn something helpful in this game. I’m willing to take everything that I can.

LAFM: Last season was an up and down season for the Bulldogs going 6-5. What were your thoughts on last season as a whole?

Like everyone says, we could’ve done better, but coming off my junior year, I think we stood tall against all the negativity, and I am proud of my team for it!

LAFM: What are you going to miss most about playing football at Cecilia?

I am going to miss the brotherhood that was formed when I was playing at Cecilia. You make bonds with some guys that will stick for life.

If any of my teammates are reading this, my biggest advice is to do what Coach Skains says. That man will make you great.

I’d like to give a shout out to my boys Kaleb Carter, Kerrick Alexander, Ryan Malbrough, and Kain Guidry.

LAFM: What was your best game while at Cecilia and why?

My best game was probably the last game of our season. I finished the night with three sacks, and a total of 13 tackles along with a forced fumble.

LAFM: If you had to go back and play one more game for Cecilia, who would it be against and why?

LAFM: Who is the college or NFL defensive lineman that you model your game after and why?

I have to say Joey Bosa (former Ohio State and current Los Angeles Chargers DE). I model myself around most of his pass rush work. He is very talented and definitely an idol of mine.

LAFM: Who was the toughest offensive lineman that you went up against and why?

The toughest offensive lineman that I went up against was probably big Kenneth Mouton from Carencro. The guy is huge.

I like hanging out with friends and family as well as doing any and everything.

LAFM: What are your plans when your football career is over?

I hope that day never comes, but if it does, I plan to become a nurse anesthetist.

Barely anyone in my family has ever played high school ball so this is definitely a dream come true to me and my family.

Personally, I want to thank my family, friends, and the whole Cecilia community. I can’t leave anyone out. Everyone helped me here.

LAFM: Why should Northwestern State fans be excited to have you on their football team?

I’m going to strive to be the greatest. Fork ’em!