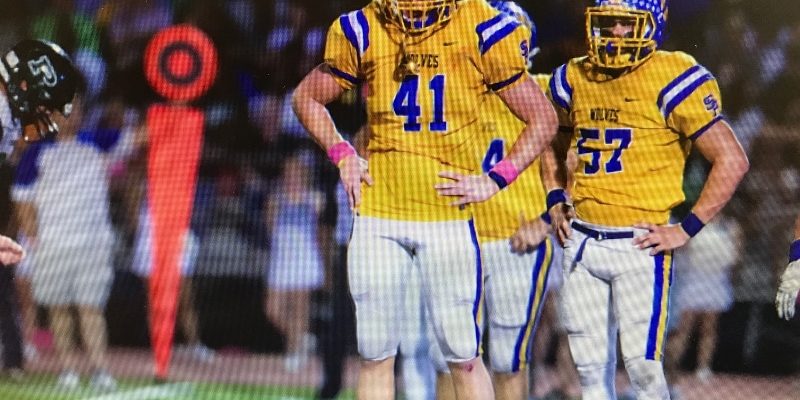 With a lot of great teams in the state including the teams that would eventually win state championships this past season, it was easy to overlook some other great teams that had great seasons as well. One of those teams was St. Paul’s High School in Covington, Louisiana. The Wolves had a great season on the football field as well as sending their players to the next level. The Wolves, led by Head Coach Ken Sears, finished the season at 10-2 with their only two losses coming to eventual state champions in Edna Karr and Evangel Christian Academy, who were arguably two of the best teams in the entire state by season’s end. On National Signing Day, six senior St. Paul’s players would eventually sign with a collegiate football team. However, there were some other great players, who will not play football at the next level, but deserve a lot of credit for the Wolves’ fantastic season. One of those players was St. Paul’s senior DE Bradley Mashburn. Along with senior DE Hayden Ocman, who would sign with Rhodes College, Mashburn got to the quarterback pretty often. The pass rush combination of Mashburn and Ocman proved to be very difficult for opposing offenses to deal with and was one of the reasons why the defense gave up no more than 35 points the entire season. Last season, Mashburn was all over the football field racking up nine sacks, 51 tackles, 34 tackles for loss, two fumble recoveries, and two passes deflected. Mashburn’s relentless play and quickness off the football helped him get some recognition after the season including LSWA Class 5A All-State Honorable Mention. Even though Mashburn is a really good football player, he has decided to hang the helmet up and focus on his academics at the University of Georgia. Mashburn may not play football at the next level like some of the others, but he had as much as an impact as everybody else on the team. We caught up with the senior defensive end as he talked about his high school football career, his senior season, and so much more in today’s recruit spotlight!

LAFM: Are you going to play college football at the next level or have you decided to end your football career?

I’m going to hang up the jersey for next year and attend the University of Georgia to focus on academics.

LAFM: What was your biggest strengths as a defensive end?

I feel that my biggest strength at defensive end was my ability to get off the ball quickly.

LAFM: What were the biggest things that you had to improve on over your football career?

At football camp right before my junior season, I was told that I was moving from outside linebacker to defensive end. I had to learn a completely new position which was very tough, but in the long run, it worked out really well.

LAFM: This year, the team had a great season going 10-2 with the only losses going to eventual state champions Edna Karr and Evangel Christian. What were your overall thoughts on your senior season?

The team had an incredible year, and we accomplished some great things including a district championship. We lost to two of the best teams in the states and we were very competitive in both games.

LAFM: The Wolves played arguably the two best teams at the end of the season. You played against both of those teams. In your opinion, what team was tougher to play against and why?

They were both great football teams, but in my opinion, Evangel Christian was tougher. They executed well, and it was a hard fought game.

LAFM: What was your best game to play while at St. Paul’s and why?

My best game at St. Paul’s was definitely the Covington game in my senior year. I had four sacks and fifteen tackles during that game.

LAFM: Who was the college or NFL defensive end that you modeled your game after and why?

LAFM: You and Hayden Ocman were a good one-two punch at defensive end. What is it like playing with another talented defensive end like Hayden?

It was awesome having Hayden on the other side of the line this past season. He’s a great defensive end and when he was on the field, I knew he would take care of his side of the field.

LAFM: What does it mean for you to play at a great program like St. Paul’s?

St. Paul’s football means so much to me and has really shaped me into the person that I am today. The coaching staff and players are some of the best people in the state and made it a special experience.

I like to workout, play guitar, and hang out with friends.

I’m going to miss playing at Hunter Stadium on Friday nights and hitting.

I’d like to thank my coaches for pushing me to be a good football player and moving me to a position where I could help the team the most. I’d also like to thank my parents for supporting me through all these years.