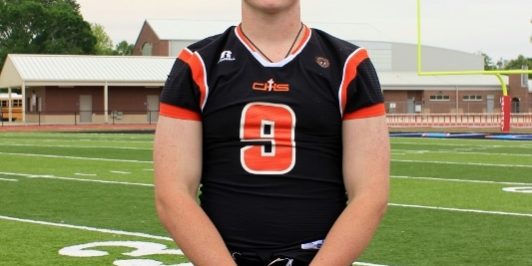 Aaron Moffitt is arguably one of the best defensive ends in the state. Aaron first started off playing both baseball and football before tearing a labrum in his shoulder. Although his injury limited his ability to further play baseball, Aaron was able to focus on football and take advantage of his 6-foot-3, 255-pound frame in his defensive end position at Catholic High School. With 54 tackles, 14 TFLs, 12 sacks and 3 FFs, Aaron was a huge part of CHS’s first state championship in 2015. Aaron’s skills have been noticed by many colleges—TCU, South Carolina California and LSU— now that he will be graduating from CHS and continuing his football career in college. Aaron has officially signed with LSU where he will be joining his dad, Tommy Moffitt, who has been LSU’s head strength coach since 2000. Aaron’s skills were also recognized his senior year in Louisiana Football Magazine’s 2016 All-Louisiana First Team Defense segment. Louisiana Football Magazine Editor/Scout/T.V. host Lee Brecheen had some high remarks about the star defensive end in the segment.

“Moffitt has great strength, speed, and confidence as a DE,” Brecheen said. “Moffitt reminds me of Joey Bosa (Ohio State) and is probably the best DE Louisiana has seen since the late Cole Pittman (Evangel Christian).”

My strengths, as a defensive end, are my ability to coordinately use my hands and feet at a great speed.

LAFM: What is your favorite play as a defensive lineman?

My favorite play is the rip and swim play our team practices.

LAFM: What were your accomplishments while at Catholic High School?

My biggest accomplishments, at CHS, were being part of winning the state championship game, two time All-State selection, All Metro, All District, as well as the strength and conditioning player of the year.

LAFM: Looking back at your career, what is the game that sticks out the most in your career?

The one game that sticks out to me the most is the state championship game against Rummel.