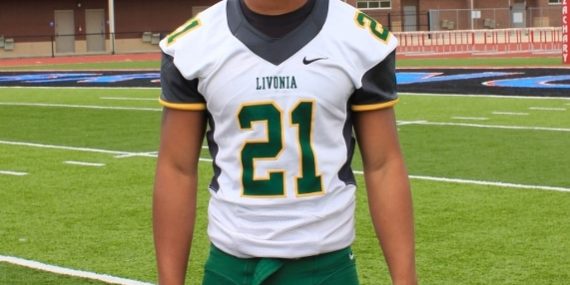 In District 6-4A, there were many talented defensive players that were highly recruited by D-I programs. Guys like Plaquemine FS Todd Harris and Livonia RB/LB Patrick Queen were guys that made a lot of headlines over their careers. Besides those guys, there were also other really talented defensive players in the district that did not get the credit like the other two players. For Livonia, Queen was not the only talented and big time defensive player on the team. Livonia CB Christion Edwards also showed that he could be a great defensive player. Like Queen, Edwards has also played on the offensive side of the football. Edwards played wide receiver until Coach Guy Mistretta saw what he can do on defense and moved him to cornerback full time. Edwards’ experience playing on the offensive side of the football has really helped him become one of the best senior defensive backs this season. As a defensive back, Edwards can do it all. He is physical, can tackle well in the open field, and he does a great job of forcing turnovers. Christion Edwards caught the attention of Louisiana Football Magazine Editor/T.V. Host/Scout Lee Brecheen, and he was named to our 1st Team All-Louisiana Team on the defensive side of the football before the start of the season.

“Christion Edwards reminds me of Tyrann Mathieu (former St. Augustine and LSU defensive back currently with the Arizona Cardinals),” Brecheen said. “He is a great hitter, tackler, playmaker, and is one of the best lockdown corners that I saw in the state.”

Christion Edwards may not get the credit that he deserves, but he has received some offers from some schools, but in the end, he has decided to sign with Southeastern Louisiana University as a preferred walk-on. It might not take long for the Lions to remove that walk on tag from Edwards once he steps on campus. Our very own Alex Martin caught up with the future Southeastern Lion as he talked about his high school career, his favorite moments from his career, the player that he models his game after, and so much more in today’s recruit spotlight!

Livonia senior CB Christion Edwards is a lockdown corner but he is also dangerous when he has the ball in his hands. (Photo courtesy of April Pitre)

LAFM: What are your stats and accomplishments at Livonia?

From freshman year until senior year, I’ve had 8 interceptions, 31 pass break ups, 3 forced fumbles, 3 touchdowns, and over 200 tackles. I also received All-State and All-District defensive back my junior year. Then, I made All-District athlete my senior year and was All-State runner up my freshman year. I was also a state champion my sophomore year.

My biggest strength to my game is my smooth hips, quick feet, my knowledge of the game, and my instincts.

I model my game after Tyrann Mathieu because not only he was a great player, but he was counted out more than once. He always proves people wrong and also, just like me he’s one of the smallest guys on the field but makes the biggest plays.

When football season is over, I play baseball.

LAFM: Do you have any pregame routines? If so, what is your routine?

I have no routines.

Livonia senior CB Christion Edwards lines up at cornerback where he has thrived in the last couple of years for the Wildcats. (Photo courtesy of April Pitre)

LAFM: What is an interesting fact about yourself that nobody know about?

LAFM: What is your favorite game while at Livonia and why?

My favorite game would be the quarter final playoff game against Rayville in my sophomore year. I scored my first touchdown and had my first fumble recovery. We also won by scoring with a minute left on the clock and had to make a defensive stand.

LAFM: Is there anybody in your family that has played high school, college, or even NFL?

My dad played baseball, football, and basketball in high school. He is the reason I wore the #21 jersey.

God and my family.