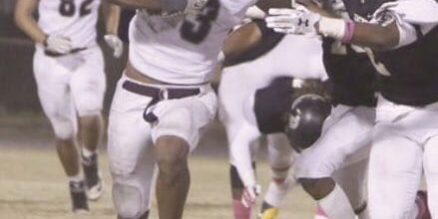 This past season, the Albany Hornets were off to a great start. The team started 6-0 and everything was clicking especially for their star player CB Cheyenne Labruzza. The Hornets started off at 6-0 and Labruzza was showing why he was one of the best players in the state, but everything changed in the 7th game against Sumner. The star Hornet injured his knee in that game and pretty much changed the entire season. Even though Albany lost one player, they lost their biggest impact player on the team and also lost many other players down the stretch due to injury. The Hornets would go on to win three more games before losing their final regular season game as well as the first playoff game against Carroll High School. If Cheyenne Labruzza stayed healthy, who knows what this team could have done. In only six games, the 2016 All-Livingston Parish Co-Defensive MVP had some pretty impressive stats including 744 yards and nine touchdowns on offense as well as 26 tackles, a forced fumble, and a fumble recovery on defense. Labruzza entered this season as not only one of the best players in the state, but one of the best players to come out of the school’s history. Cheyenne Labruzza is the model for what a student athlete should be. He is a play maker and an electrifying football player that can change the game on offense or on defense as well as an excellent student in the classroom with his 4.0 GPA. Labruzza has accomplished a lot including being named All-State three times as well as being recognized on our 1st All-Louisiana team. No doubt that he is a very impressive young man for what he has achieved already! All of his achievements attracted a lot of major D-I schools from major conferences and in the end, Cheyenne Labruzza decided to take his talents to Tennessee. In today’s recruit spotlight, we caught up with the Tennessee signee as he talked about his high school career, his senior season, why he chose the Volunteers, and so much more! 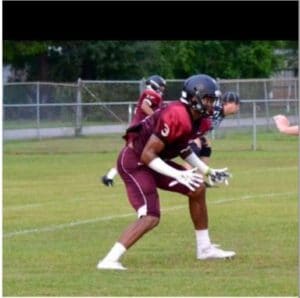 LAFM: What’s your name, age, position, and school you played for?

LAFM: What is your max bench press, vertical, and 40 yard time?

LAFM: What are your accomplishments while at Albany High School?

LAFM: What are your strengths as a defensive back?

My biggest strength is probably my size, being able to press receivers and as well as my offensive skills. Playing on offense, I know what these guys’ habits are when I am on defense so I can read off that.

I need to improve on my quickness, my short burst, and my explosiveness.

LAFM: I heard that you model your game after not one but multiple defensive backs. Who are some of the guys that you watch film on and why?

LAFM: This season, the team had a great start going 9-0 but lost the last two games to end the season. What are your thoughts on the season as a whole?

The team started to grow and then, I got injured, but it was not just me. A lot of other guys got injured down the stretch. It was a long season, but I want to say that I wanted to be out there so I tried my best to be a leader and get these guys out there and be ready to play.

LAFM: What was your favorite game that you have played in over your career and why was that game so special for you?

I would say the Springfield game in my senior year was my favorite game because it’s a big time rivalry. Springfield beat us the last three years and in reality, we would beat ourselves with mistakes. This year, our goal was just to go in, have no mistakes, and play discipline football. We did our jobs, and we won the game 42-0. We went in and did what we needed to do. To accomplish that with my team was an amazing feeling!

LAFM: You have dealt with the recruiting process yourself. What is some advice that you have for younger players that are going to go through the same process that you have been through?

My advice is just to take your visits to the school that you are interested in and if you have a list of five schools that you want to go to, go to those five schools. If you have 10-12 schools and you know that is going to cut in your practices, school work, and your workouts, narrow those schools to five and take visits to those five schools. Try and get it wrapped up so when you start your senior year, you can focus on your team. Then, after the season is over, put your focus on college. You don’t want to wait the week of Signing Day and cram a decision in your head. Plan it out ahead of time, just be smart, and go where you want to go! Don’t go where your coaches or your family wants you to go. Go where you want to go because in the end, you will be the one playing there for the next four years.

I am majoring in Business.

LAFM: What does playing at Albany mean for you in your own words?

It means a lot to me because we live in a pretty small town, but it is definitely oriented. When we play on Friday nights, the whole town is there. Every store is closed down, and everybody is there to watch us play. It means a lot because I have been playing with these guys since we were little kids. To get wins on Friday nights and to score touchdowns is pretty incredible! 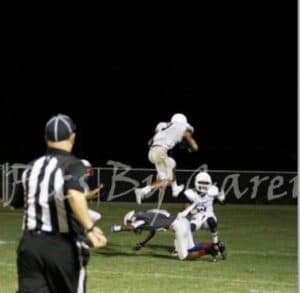 LAFM: If you had to pick one more team to play against, what team would it be and why?

If I had to pick one more team to play, I would choose to play Carroll again in the playoffs because we fell short.

LAFM: You were named to our All-Louisiana team at the beginning of the season. What does it mean for you to be recognized as one of the best players in a state that has produced the most collegiate and NFL players per capita in Louisiana?

It means a lot to me because this is everything that I worked for. Like you said, when you are recognized as one of the best in this state that has a lot of talent, then, you must be really good. Being recognized among these guys is just a pleasure!

LAFM: What are some other sports or hobbies that you like to give involved with when the football season is over?

I love playing basketball, and I also run track.

LAFM: What is your message to next year’s Albany football team?

The message that I want to say to next year’s team is Effort and Attitude! Have great effort whether it’s in practice or in a game. Also, have a great attitude when going to a workout or a game. The outcome of a game could be based on your attitude. If you are going to a game and have a bad attitude, you can get beat on your assignment. If you give everything you have, you can probably make a play that you wouldn’t think that you can make.

My nephew Jonathan Parker plays for Southwest Mississippi Community College . He is the one that wanted me to play college football and put this goal in my head.

I want to thank my brother, my nephew Jonathan Parker, and everybody that has supported me along this journey.

LAFM: Why should Tennessee Volunteer fans be excited to have you on their football team?

For one thing, I am going to come in and work hard whether it be working  in the weight room, in the classroom, and on the field. If a coach tells me something, I will listen. I am a leader, a role model, and will just give it everything I got for the state of Tennessee!