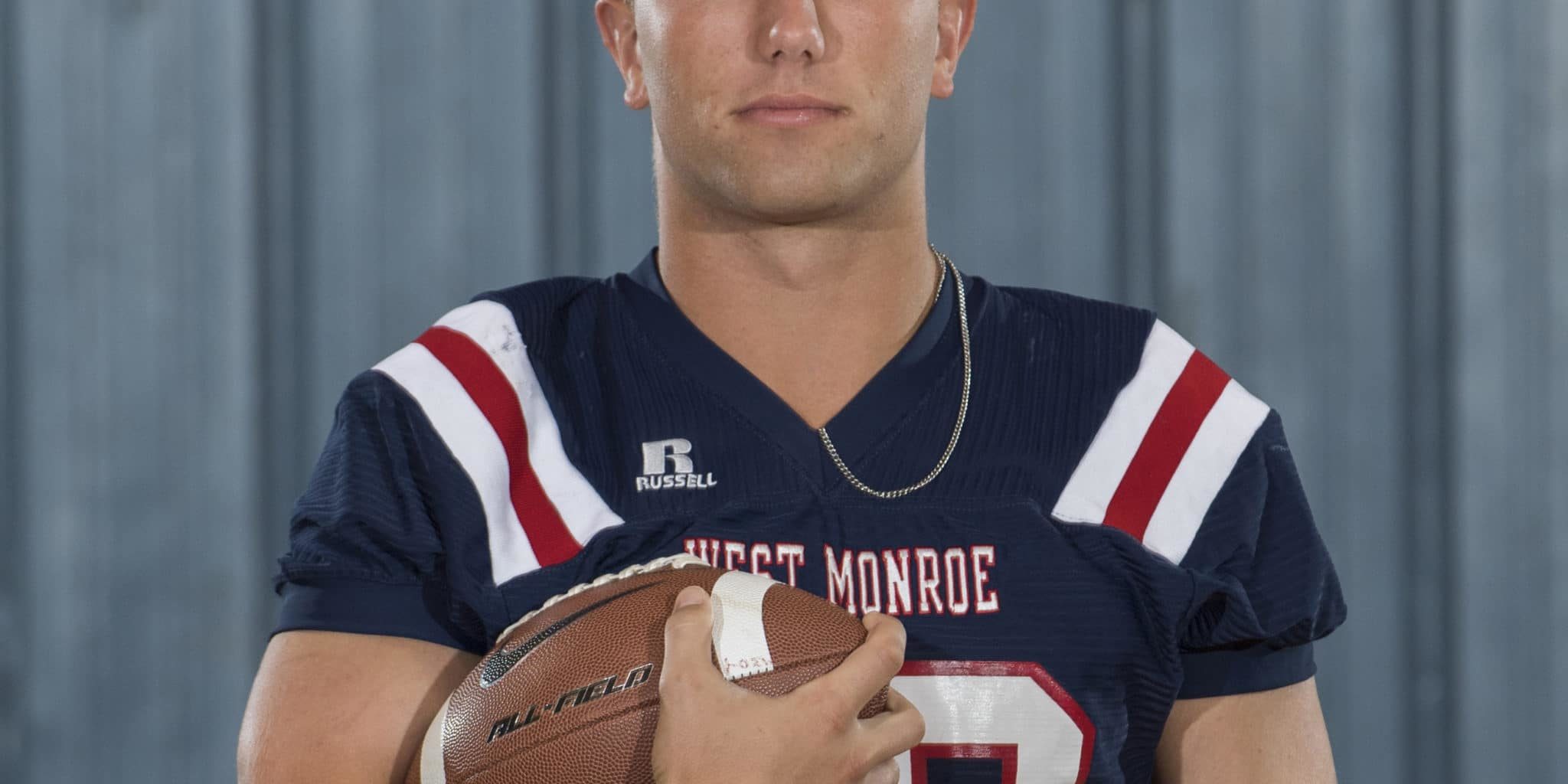 Unquestionably, one can say Slade Bolden is one of the greatest players to play for West Monroe High School. Slade Bolden has been challenging the term “athlete” by his performances on the field in every way. Bolden was given the opportunity to start as a freshman, which is unheard of at West Monroe High School, when the starting quarterback got hurt right before the season started. He did not disappoint running for over 1,000 yards and throwing double digits in touchdowns. His ability to perform and execute with little experience as a freshman earned him All District in 2014. Bolden continued to rotate in as a quarterback and as an all-purpose full back/wide receiver the next year to earn him All District Athlete in 2015 running for 1,073 yards, catching 20 passes for 381 yards, and executing three touchdowns at the end of the season. Bolden continued to thrive and perform on the field to earn him All District and MVP of the District offense in 2016. Off the field, he accumulates a 4.0 GPA emphasizing the term “student athlete.” He is already making moves with his first pre-season play to Jairus Henry for a 75-yard touchdown.  Overall, the West Monroe senior athlete is a force to be reckoned with on and off the field. Louisiana Football Magazine recruiting expert Lee Brecheen praises Bolden’s ability and versatility as he was on the cover of our North Louisiana edition of the magazine as well as making our All-North Louisiana team.

“Slade Bolden is such a great athlete,” Brecheen said. “If he gets five yards past the line of scrimmage, you are not catching him with his 4.40 speed. The sky is the limit for this kid.”

His performance speaks for itself as all the big time DI teams have noticed and come to the conclusion he would be an asset to their program. Teams like TCU, Arkansas, Alabama, and LSU have given offers to the talented four-star athlete.  On August 3rd, Slade Bolden made his decision to verbally commit to the University of Alabama where based on his athleticism could play any number of positions including running back or wide receiver. We can not wait for Slade Bolden to lead the Rebels back to the Dome this season and continue to pursue his football career in college. In today’s recruit spotlight, we caught up with the Alabama commit before tonight’s big game against John Ehret as he talked about his West Monroe career, committing to the Crimson Tide, his goals for the season, and so much more!

Running the ball and being able to make big plays as a receiver, I run good routes and have very good hands while being able to get open. I can throw as well.

LAFM: What is your favorite position to play?

LAFM: What were your most memorable accomplishments while at West Monroe High School?

So far, being able to make it to the State Championship game.

LAFM: What is an interesting fact about yourself that you would like our readers to know about?

I love to have fun in any situation, and I’m an avid wiffle ball player.

LAFM: The Rebels had just won the district championship and were on their way to the state championship with an 12-2-1 season until the team lost in the 5A State Championship to Landry Walker. What are your thoughts on how the end of the season turned out as well as the season as a whole?

Obviously, the season did not end the way we wanted but it definitely fueled us for our upcoming season.

LAFM: Looking back at your career, what is the game that sticks out the most in your career?

Definitely the St. Amant game, 3rd round of the playoffs in my Junior year.

I would have to say Isaiah Buggs from Ruston High School in my Freshman year.

LAFM: What are some things that you have picked up from Coach Jerry Arledge that has helped you in your game today?

To be a strong leader and to remain humble and to always be there for your teammates.

LAFM: What is your advice for next year’s West Monroe football team?

LAFM: You have recently signed with the University of Alabama to play at the next level. What has helped you make the decision to play for the Crimson Tide?

Just everything about Alabama in general. The coaching staff, the facilities, and the whole town in general. I know I will be able to fit in that offense.

LAFM: What do you think you need to improve on when you get to Alabama?

To be a better an all-around receiver.

LAFM: Who are some college or NFL players that you like to model your game after and why?

My grandparents, who I live with who are basically my parents, all the coaches and mentors that have been there for me, and most importantly none of this would be possible without the man upstairs.