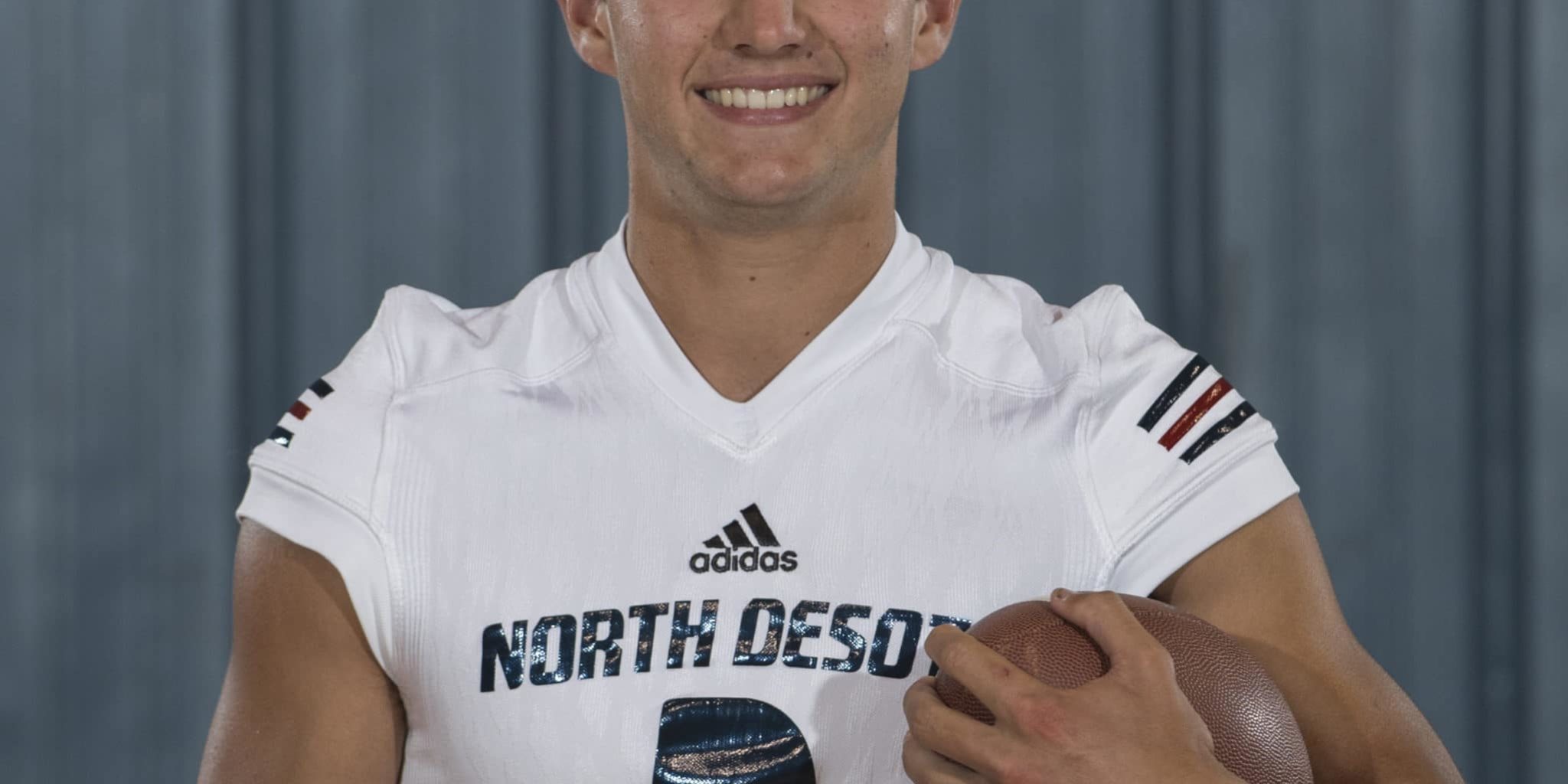 To show people how much depth there is in this state, especially at the skill positions, players like T.J. Hawthorne from North Webster are just starting to gain interests from other schools. Another special athlete and play maker that is just gaining attention from colleges over the past couple of weeks is Maguire Parker from North DeSoto. Parker is another great athlete from North Louisiana. He has played many positions over his career under his coach Scott Abernathy. Abernathy cannot brag enough about his senior athlete for what he has been able to do over his four year career playing for the Griffins.

“Maguire is a very athletic kid,” Abernathy said. “He played multiple positions over the years including wide receiver, defensive back, and kick returner. Hopefully, he will be able to continue his career in the college ranks.”

As of right now, Parker has not received any college offers, but has been contacted by several schools.

“I have been contacted by Louisiana College,” Parker said. “I also had the honor to make several visits to Oklahoma State University where I have been offered a Preferred Walk On Position and partial athletic scholarship.”

Heading into the season, the Griffins had to replace one of their best football players in program history in Delmonte Hall (Southeastern), who ran for over 8,000 yards and 88 touchdowns during his high school career. Knowing that they had a versatile receiver like Maguire Parker, the Griffins became a little bit more pass heavy. There were high expectations at the beginning of the season for the senior as he was named the 2017 Shreveport Time Preseason Player of the Year, but Parker stepped up to the occasion by being the Griffins’ number one offensive player racking up many awards over the course of the season. Even though it was Parker’s best season, he did not need to breakout as he has been making plays since he was a freshman for the Griffins. Having a reliable player like Parker made it easy for the coaching staff to put all the trust in him. As a multiple year starter, it is safe to say that Maguire Parker will go down as one of the best offensive players in program history.

If all those accomplishments were not enough, he was complimented as being one of the best players in the state by a former LSU and NFL running back. That player was Jacob Hester. When Hester was on our T.V. show earlier this year, he bragged on Maguire Parker often as far as what kind of player he was on the field and what kind of person he was off the field. Parker actually knew Hester for a long time and helps him train.

“I attended one of Jacob’s combine camps several months ago and he noticed my abilities,” Parker said. “He worked with me one on one and helped me train. When he opened the DI training facility, I continued my speed and agility training with Coach Matt Merry. Coach Merry has trained me since middle school.”

Having worked with guys like Hester and Merry have helped Parker improve on his game gradually over his career. Having the support of a great football player like Jacob Hester is something that Parker will forever hold close to his heart.

“Having Jacob’s support has been one of my greatest honors to date,” Parker said. “Jacob’s career and reputation is incredible, and it’s truly humbling to have him speak on my behalf as well as Coach Merry.”

What is even more impressive than his football achievements and the kind words and advice from the LSU great is what he does off the football field and in the classroom.

“My GPA is a 3.2 and my ACT score is a 20,” Parker said. “I have received the principal’s award all four years of high school and have been part of the Red Coats, which is a service organization reserved only for seniors based on grades, conduct, and teachers recommendations.”

Not only is he a fan favorite on the football field, but he is also a great student in the classroom. Louisiana Football Magazine’s recruit expert Lee Brecheen loves guys like Maguire Parker who give it everything that they have in both areas.

“Maguire Parker is a great athlete,” Brecheen said. “He is the team’s leading wide receiver and runs a very fast 4.69/40. This is a player that could play multiple positions.”

This season, the Griffins had a pretty good year posting a 7-3 regular season record and winning a playoff game against Assumption High School in the first round of the Class 4A playoffs. However, Parker’s senior season and North DeSoto playing career came to a very painful ending as the Griffins got shut out by a very talented Warren Easton football team 54-0. Even though the ending was definitely not the way Parker would have wanted, he still thought it was a great season and a lot was accomplished.

“I feel that we had a pretty good season overall,” Parker said. “However, there are some games that will always come to my mind when looking at my high school football career like playing against Loranger in the second round of the playoffs in my sophomore year where I scored two touchdowns and in the next round of that year as well when I scored two more touchdowns when we needed them against Neville.”

Overall, Parker finished his career with 112 catches for almost 2,000 yards and 22 total touchdowns. Even though his high school football career is over, he will still follow his high school team. He even gave his team a message for next season.

“My message to next year’s team is to work hard and cherish the season because it goes by fast,” Parker said.

Parker accomplished a lot over his four years, but he could not have done it alone.

“I would like to thank my family, Matt Merry, and Jacob Hester for working with me in the off season,” Parker said. “I also want to thank Christian Procell for being a good teammate and best friend. He could play at the next level as well.”

As far as the next level for Parker, he believes that he could be a great slot receiver in college.

“I love playing wide receiver because I love going against one person and coming out on top,” Parker said. “I even model my game after a wide receiver in Trent Taylor (Evangel Christian/Louisiana Tech/San Francisco 49ers) because he didn’t care how big he was or what anyone said.”

Parker feels that Taylor’s strengths on the football field compare with his skills as well.

“I believe my biggest strengths are my self discipline, my persistence, my competitive nature, and most importantly, my coachable attitude,” Parker said. “I enjoy working hard and push myself beyond even my own expectations.”

Parker is not the only person who thinks that he can thrive as a wide receiver at the next level.

“Maguire will be a slot receiver at the next level,” Abernathy said. “He has a great knack for the football as well as great hands and is also a great route runner. I think his biggest attribute is his ability to high point the football before the defender does. He does a great job of getting his hands on the football before the defender does. We think he is going to do a great job with whatever route he wants to go to whether it is the walk on route or the scholarship route, but he is definitely a scholarship player.”

The thing that might be holding Maguire Parker back is his size as he is only 5-10, 165, but that is not stopping the senior wide receiver from accomplishing his goals.

“I feel like I am overlooked because I have faced many players who are in college on scholarships and played well against them,” Parker said.

As of right now, Parker has been interested by Louisiana College and Oklahoma State. However, he is still trying to promote himself to colleges trying to prove that he is indeed a scholarship worthy football player.

“My message to college coaches is if they are looking for a hard working, responsible, respectful go hard athlete, that is me,” Parker said. “I am not a follower. I have always loved competition and I will fight tooth and nail to be the best. My dad has taught me a work ethic that is hard to come by in these times. I intend to use it to further my interests in the next chapter of my life.”

There is no question that whatever college does give Maguire Parker a chance will enjoy reading that chapter.