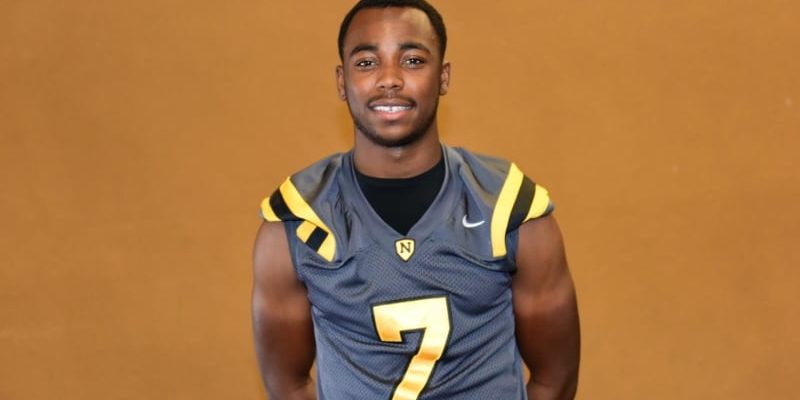 If people look up some of the greatest players to play for Neville High School, they would definitely find Jaiden Cole’s name on that list. Cole has accomplished many great things over his career, and he did it while playing many positions including QB, WR, and DB. He’s one of those players that make it a lot easier for coaches to plug in at any position because he could excel with his athleticism. The position that Neville fans will remember most about Cole is when he was the starting QB for the Tigers. Cole took over the starting quarterback in his junior year after starting his sophomore year as a defensive back. Ever since he took his first snap as the starter, there was no question that the job was his. In 2015, he helped the Tigers win their 14th state championship and proved that he was a winner wherever he played. As both a quarterback and a defensive back, he is a combined 40-2 with two state championships as well as another state championship appearance in his senior year. Not only did he win a lot of games, but he put up some big time numbers, including his senior season, when he accounted for 3,000 yards and 49 touchdowns. The senior Neville athlete clearly showed that he was one of the best in the entire state heading to this year with all the things that he accomplished even before his senior year. Jaiden Cole was named to our 1st All-Louisiana team at the beginning of the season. Louisiana Football Magazine Editor/T.V. Host/Scout Lee Brecheen knows how special Jaiden Cole was as a football player over his Neville football career.

“Jaiden Cole is one of the best athletes in North Louisiana,” Brecheen said. “Jaiden is a smart leader who can play free or strong safety in college. He played quarterback for the team and runs the football with a defensive back mindset. He is very powerful when he runs the football and very tough to tackle.”

With everything that he has accomplished throughout his career, he realized that he could have ended it on a higher note with a state championship win against Edna Karr. However, the Neville Tigers ended their long winning streak with a 34-21 loss to Edna Karr in the Superdome. Even though it was not the ending that Cole expected, there is no denying that he will go down to one of the best to ever put on the black and gold. Jaiden Cole will take his talents to Louisiana Tech where he can try and bring the same results to Ruston as he did when he was at Neville. We caught up with the Louisiana Tech signee to talk about his high school career, signing with the Bulldogs and so much more in today’s recruit spotlight! 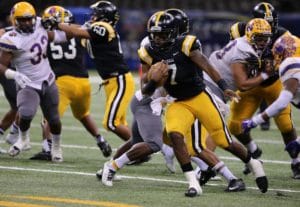 Neville senior QB Jaiden Cole (7) shows his athleticism on this run in the 2015 state championship against Edna Karr. (Photo courtesy of Jaiden Cole)

LAFM: You are going to play for Louisiana Tech next season. What has helped you make your decision to play for the Bulldogs?

The team bond and the success that the team had in the last couple of seasons helped my decision to sign with Louisiana Tech.

LAFM: You have played many positions over your high school career. What position will you play at the next level?

I will play safety at Louisiana Tech.

Neville senior QB Jaiden Cole proved that he was a winner at Neville with a 27-1 record as a QB along with two state championships. (Photo provided by Jaiden Cole)

It’s a fun experience winning and being around the players as well as the staff each day.

My vision is my biggest strength to my game.

LAFM: What are some things that you need to improve on when you get to Louisiana Tech?

I need to improve on tackling and adjusting to the speed of the game.

I model my game after Jamal Adams (former LSU safety and NFL 1st Round Draft Prospect).

LAFM: You had an incredible career at Neville and will probably come down as one of the best to come through the school. What are your overall thoughts on your football career?

It shocked me on how successful we were, and it is definitely something that will always be remembered.

We were very disappointed to not end up on top, but you have to hand it to Edna Karr. They were a good football team.

I like to train during the off-season, play video games, hang out with my boys, and do yoga.

I like to sing even though I am not good at it.

LAFM: Out of all the memorable games, which one sticks out to your mind the most and why?

The game, that sticks out to my mind the most, is the Warren Easton game at home in my junior year. It was a sellout game and we advance to the state championship.

I like to thank Strength Coach Eric Herndon, my teammates, and my family including the teachers at Neville.

LAFM: Why should Bulldog fans be excited to have you on their football team?

They are getting a hard working player and student, who is ready to learn and ball out.