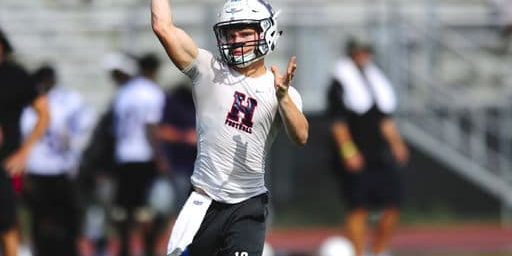 This season, the Archbishop Hannan High School football team had their best season since 2013 when the Hawks made it all the way to the Superdome to only fall to the Calvary Baptist Cavaliers. In 2017, the Hawks were flying high to start the season as the team won their first seven games. The Hawks were on their way to what looked like an undefeated season as well as a district championship and a high seed heading into the Division II playoffs until the team lost two of their last regular season games against Albany and Loranger. Those two losses cost the Hawks a district championship, but the Hawks were able to bounce right back with a win against Bogalusa to close the regular season as well as a first round playoff win against Vandebilt Catholic. However, the season came to the end in the Division II quarterfinals against the De La Salle Cavaliers, which eventually ended up in the state championship game. The season had its ups and downs, but the Hawks prevailed to have a nine win season, which was the most since that great championship run five years ago. Archbishop Hannan senior OT Christian Hoz (Arkansas State Signee) and senior TE Seth Caillouet (Texas State Signee) may have been the two top recruits on this year’s football team, but they both would admit that the team would have not gotten this far without their senior dual threat quarterback Christopher Rabensteiner.

According to Louisiana Football Magazine recruiting expert Lee Brecheen, Rabensteiner is a great athlete that may have played quarterback at the high school level, but could play another position at the next level.

“Christopher Rabensteiner is a really good high school quarterback,” Brecheen said. “However, he is a great prospect as a slot wide receiver that could fit in with the right D-III school like a Louisiana College or a Millsaps. He could be like another Julian Edelman.”

Edelman, who currently plays for the New England Patriots, is actually a player that the senior Hawk quarterback models his own game after even though he was playing quarterback and not receiver.

“I model Julian Edelman because he has played multiple positions and has excelled at whatever position he was asked to play,” Rabensteiner said.

It was a senior season for Rabensteiner to remember as he led the Hawks to nine wins and put up some pretty incredible numbers during the process as he accounted for over 2,000 total yards of offense as well as 24 total touchdowns. Most of those yards and touchdowns came on the ground as he finished in the top five in the New Orleans Metro area in rushing despite playing quarterback.

“It was a great season and a testament to the coaches and players around me that something good is happening down here in Covington now,” Rabensteiner said.

Even with all the success, the star quarterback remained humble giving credit to his offensive line blocking up front.

“My offensive line made it easy for me,” Rabensteiner said. “They blocked their butts off for me and everyone so I tried my best to do something positive behind them.”

As athletic as Rabensteiner is with his 4.55/40 speed, it his other intangibles that really sets him apart.

“I believe my leadership qualities, my no-quit attitude, and my attention to detail are my greatest qualities,” he said.

Those leadership qualities developed overtime for Rabensteiner as he did not start his career at Hannan.

“I actually did not start out at Hannan,” Rabensteiner said. “I started out at Jesuit and then transferred two weeks into my freshman year.”

Rabensteiner also played a couple of positions before settling in under center.

“My first varsity start was against St. Helena in my sophomore year,” Rabensteiner said. “I actually played linebacker, but it was a standout game because we came back from a 21 point deficit to win.”

His leadership skills and his versatility not only comes on the gridiron, but it also translates in the classroom as he also has a 33 on his ACT as well as a 4.35 GPA. Attending and playing at Archbishop Hannan was something that just fitted well for Christopher Rabensteiner and is something that he will miss once he gets his high school degree.

“I’m going to miss the small school atmosphere,” Rabensteiner said. “You just know everybody and their parents.”

His high school career may be over, but he is also excited for the future of the Archbishop Hannan football program under head coach Scott Wattigny as he has already gave his underclassmen teammates some words of advice.

“Ahh, my boys,” Rabensteiner said. “I love y’all and will always be y’all’s biggest fan. Work y’all’s butts off not for Coach or your mom, but for each other and the H on y’all’s chest. We had success this year, but that’s no guarantee for next year and years to come. One last thing, I can’t necessarily say it, but know what y’all are about to do.”

Rabensteiner could not have had a better ending at Archbishop Hannan High School and there is not enough people to thank for helping him get there.

“I want to thank my parents of course for supporting me with love and patience through everything,” he said. “I also want to thank my coaches for giving me the opportunity to play and lead this team. Finally, I want to thank my teammates. Without them, their hard work, and trust in me as a leader, none of this could have happened.”

At 5-8, 160, Christopher Rabensteiner may not be the most physically dominating player, but he is a player that has sneaky good athleticism and speed as well as plenty of hard and determination. As of right now, Rabensteiner has received no collegiate offers, but has been contacted by some schools. For the colleges that are contacting him now, Rabensteiner will make sure that he is worth the time.

“I know I don’t pass the eye test physically, but I will promise you heart and that I’ll be the hardest working player you know,” Rabensteiner said.

For anybody that has played with or knows Christopher Rabensteiner, they can sure agree with him that is exactly what they are going to get.