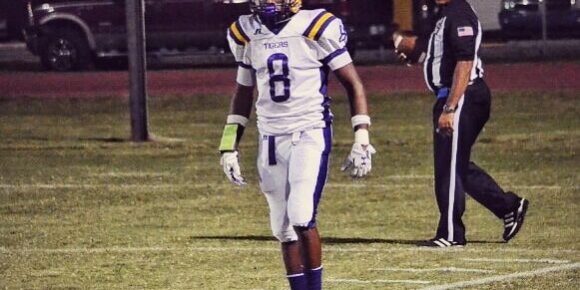 Thibodaux High School Amik Robertson is one of the most talented and underrated players in the state of Louisiana. Amik is a very good cover corner and is an explosive player every time he has his hands on the football. Meet Amik in today’s recruiting interview as he talks about last year and his expectations for this year.

Amik Robertson returning an interception for a touchdown

LAFM: How far did the team go last year?

LAFM: What are the expectations on this year’s team?

I want to really get my team better mentally and physically.

LAFM: What have you been doing during the offseason?

Put a lot of work in the field, in the weight room and in rehab.

LAFM: What was the injury that you had last year and how did the injury affect you?

I had a partial tear in my ACL. I didn’t miss any games though. Only a couple of practices.

LAFM: How many offers did you get this year and by whom?

LAFM: What are your feelings on the recruiting process? Is it stressful or enjoyable for you?

Right now I’m just being patient with the process. My main focus is getting back healthy and improving my ACT score.

LAFM: Who do you model your game after and why?

Tyrann Mathieu because he’s fearless and competitive. Also, because me and him play similar.

LAFM: What are the best parts  to your game and what do you need to work on?

Honestly, I need to work on everything. Every football player needs room for improvement.

LAFM: What is your favorite team to play against and why?

My favorite team to play against would probably be Destrehan, because of their offense.

LAFM: What is your favorite football memory?

My favorite football memory is when me and the freshman football team went undefeated. We were the first team to do it at Thibodeaux High School.

LAFM: Who is the best football player you’ve played against while at Thibodeaux High School?

The best football player I have played against would be Donta Johnson. ( former Thibodaux high running back )

LAFM: What do you do after football season?

After football season, I continue to put in work but I also focus on my grades a lot.

LAFM: What separates you from any other high recruit in this state?

What separates me from other athletes is my work ethic and my attitude. I’m very humble and very confident, because I put in a lot of work in the classroom and off the field.

LAFM: Did any of your family members play high school, college, or even pro ball?

My grandpa on my dad side played semi pro ball but I didn’t know him that well.

LAFM: What advice would you give to somebody who is getting recruited heavily and has to deal with the recruiting process?

I would  tell him to enjoy the process but at the same time stay focused on your grades because that is most important.