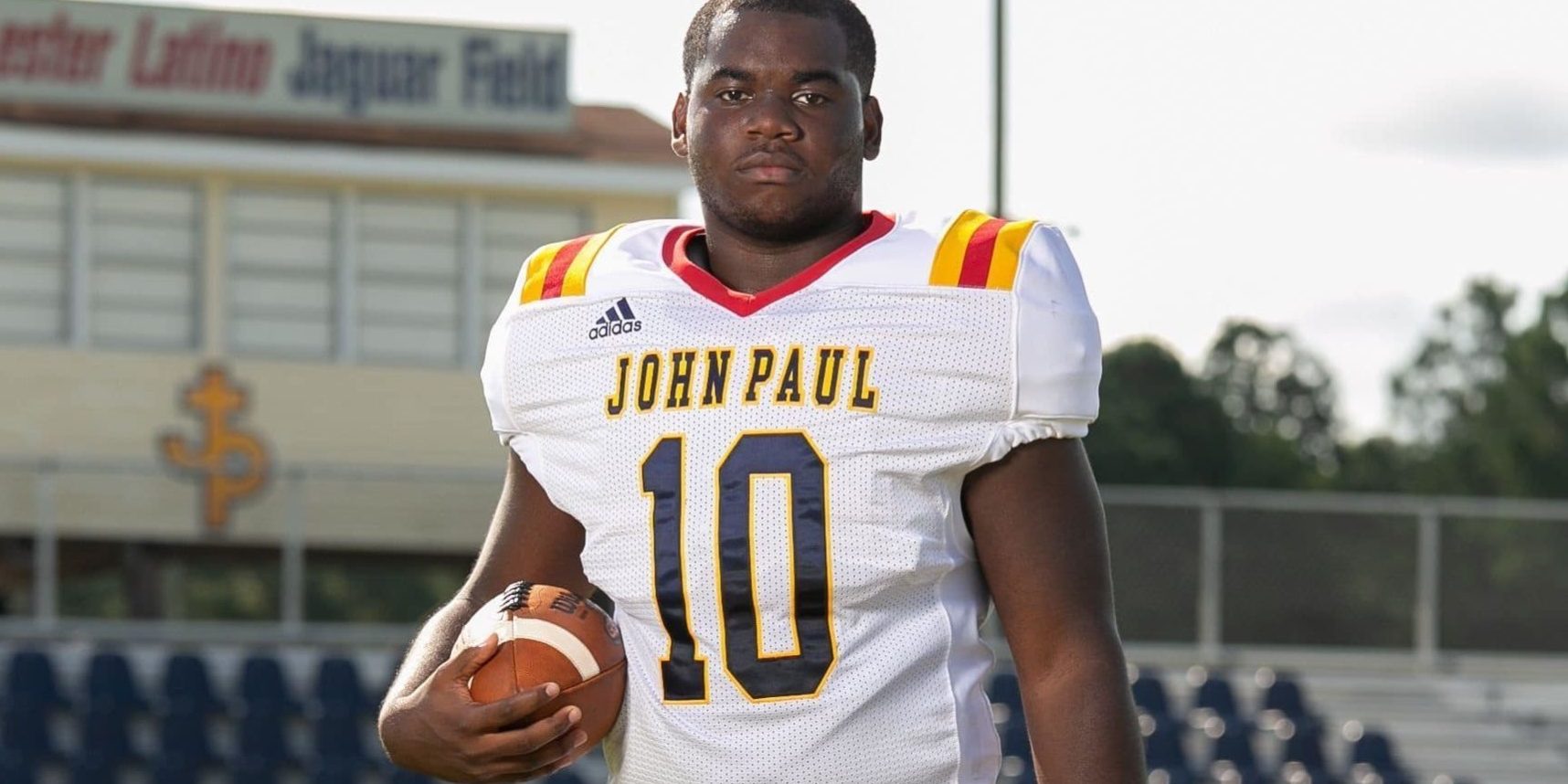 Although the Pope John Paul II Jaguars are not one of the biggest football powerhouse programs in the state of Louisiana, that has not stopped senior linebacker Jalen Thomas from becoming one of the most productive players in his area. Last season, the 6-2, 240 pound linebacker made a living in opposing backfields with 75 tackles, 20 tackles for loss, and six sacks. Those impressive numbers led to All-District honors along with being named the team’s Defensive MVP. Despite the success on the field, Jalen believes that he could have been much better in what has been an already impressive season.

“I thought I played well last season, but I felt I could have made more plays, and that’s what drove me during the offseason to work harder so I can be even better this year,” Jalen said.

Jalen’s motivation to get prepare and get better comes from his father Franklin Thomas, who is an assistant coach on the Pope John Paul II High School coaching staff. Not only does Jalen get advice from his dad as a coach, but also as a former professional football player. Franklin was originally drafted as a tight end by the Detroit Lions in the seventh round of the 1991 NFL Draft coming out of Grambling. Franklin also had some experience in the Arena Football League as well. Not a lot of kids can say that their dad played football at the highest level, but for Jalen, he is taking full advantage of that opportunity.

“It is a huge advantage because where I am trying to go, he has already been and he knows what it takes to get there,” Jalen said.

Not only is Jalen getting great advice from his dad, but he also is getting advice from a trained professional that has helped send players to the college and pro levels.

“I have been training with my dad and my speed and conditioning coach Keith Ballard, who trained Dylan Moses (U-High/Alabama) in high school,” Jalen said.

Since Jalen is training with both his dad and Coach Ballard, he does take powerlifting very seriously as he can bench press 315 pounds, squat 520 pounds, deadlift 525 pounds, and power clean 275 pounds.

“In my opinion, lifting weights is the most important part of the offseason,” Jalen said. “It keeps me in shape and lessens my chances at getting injured.”

The middle linebacker prospect has power and athleticism, but as of now, he has yet to receive a scholarship offer. However, there have been some schools that have contacted him.

“LSU, Florida State, Yale, UL, Lamar, Grambling, and Columbia have all shown interest in me,” Jalen said. “I had plans to visit the colleges that are interested in me, but due to COVID, I can’t take any visits until further notice.”

Because of the time lost with COVID, Jalen is even more motivated to take each day as an audition for colleges, whether it is on game day or every day in practice.

“I am a player that works super hard on the field and in the classroom,” Jalen said. “I give 110% in all that I do. I am also a player who wants to win and whatever program I go to is getting a winner.”

Leading his team to a state championship as well as having an All-State and All-Metro type year will help him receive those scholarship offers. In order to achieve those goals, he is evaluating his level of play.

“Being able to play on the strong or weak side of the defense and still be able to cause havoc are my strengths,” Jalen said. “I need to use my hands more on pass rush situations, and I need to play with more leverage because I know leverage is very important at the next level.”

Ultimately, that is the goal for the two way Pope John Paul player, who also plays fullback for the team, and that is to make it to the NFL just like his father. However, as prepared as Jalen is, he also has backup plans just in case.

Training with his dad has influenced Jalen to not only pursue a chance at the professional level, but also to pursue a future career in training. Just recently, Franklin Thomas joined our own Lee Brecheen’s new podcast “The Sports Scouting Report Podcast With Lee Brecheen” and raved about how proud he is of his son.

Jalen Thomas already has the high football I.Q., strength, unselfishness, willingness, and obviously, the family genes to get his opportunity of playing at the college level.

Click the link below to check out Jalen Thomas’ junior highlights: