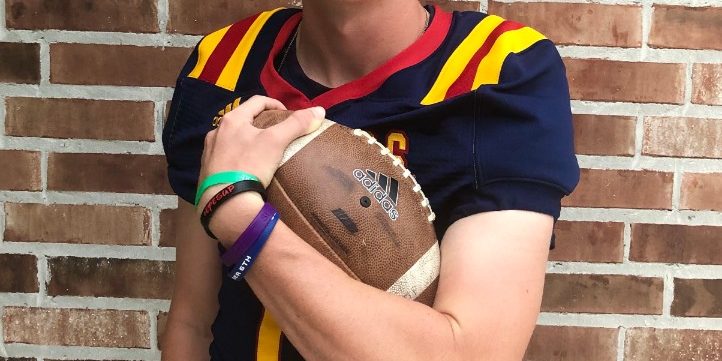 Logan Klotz is the senior kicker/punter of Pope John Paul II high school’s football team in Slidell, LA. Klotz began training with Coach Adam Tanalaski of Hammer Kicking Academy in the 6th grade. During more recent years, he attended a HKA training session in Orlando, Florida where he completed a long 64 yard kick. Along with being a punter, Klotz is also a player of the soccer team at Pope John Paul II.

All of his hard work in training and practices with both sports has led him to have speed of 4.6 secs in the 40 yard dash and strength of squatting 295 pounds and bench pressing 185 pounds. In his junior year, he punted an average of 42.4 yards on 56 punts, and kicked a total of 2,373 gross yards. He was also 14 for 18 in field goal attempts with a long of 46 as a kicker.

Klotz has won many athletic awards in his high school career such as 2019 Preseason All-State Football Team, 2018 First Team All-State, Metro (New Orleans), and District Football Team, and 2016 Football Special Teams Player of the Year. He has also set many school records including most punt yardage in a career with over 6,000 along with longest field goal made and longest punt. To continue his achievements, he has an academic performance of a 3.9 GPA and a 21 ACT score.

To check out Logan’s highlights, click the link below: