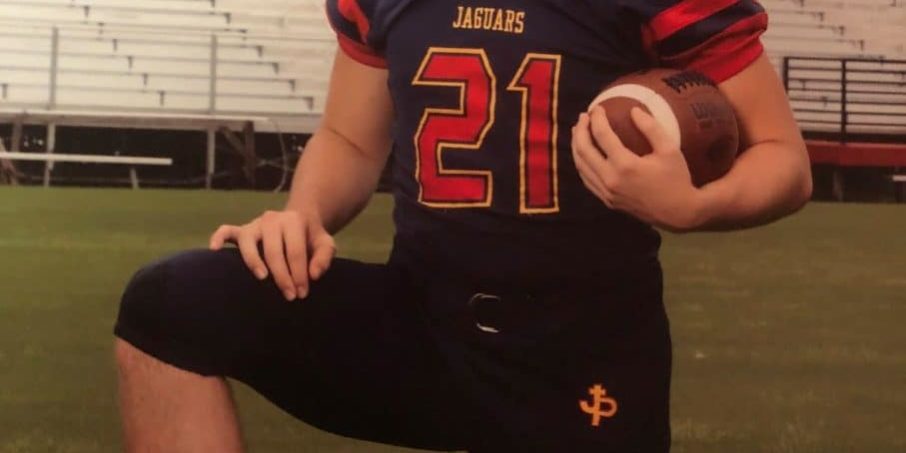 Pope John Paul II High School upcoming senior OLB/DE Micah Saucier was always meant to perform on the football field. His eighth grade football coach Scott Wadleigh has been around football for quite a long time as he was himself a former player for Southern Mississippi. Wadleigh saw something special in the young player giving him an intimidating nickname.

“Coach Wadleigh nicknamed me “The Monster”, Micah said. “He was really impressed with my play recognition, explosiveness, and ability to get into the backfield.”

Coach Wadleigh is not the only person that was impressed by the intangibles that “The Monster” brings to the table. Micah’s father Al Saucier Jr., who was a longtime metro coach at multiple sports including basketball and softball at St. Margaret Mary Middle School and Pope John Paul II, believes that “The Monster” nickname does suit his son’s playing style because he goes all out with effort and most of the time, does a great job of terrorizing quarterbacks and stuffing plays in the backfield. According to his father, Micah has the ability to take over games.

“I remember when Coach Wadleigh gave him the nickname in his eighth grade year when he was playing for St. Margaret Mary,” Al said. “He had over 12 sacks that season including five in one game.  I believe he knocked four quarterbacks out in one game and one time, he stopped the opponents offense at the goal line for four consecutive plays against St. Patrick when he was in high school. That was how he was able to get that nickname.”

Micah Saucier was able to be a part of a lot of successful seasons during his middle school years. However, the transition to playing for Pope John Paul has been very tough as instead of winning and contending for state championships, he has been apart of a high school team that has had three different coaches as well as more losses than wins. Still, no matter what the outcome is, the outside linebacker defensive end hybrid just goes out there and gives it the best that he has out on the football field.

“I just tell him to just go out there and help the team where ever he can,” Al said. 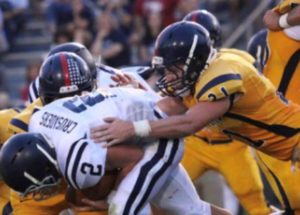 Nicknamed “The Monster”, Micah Saucier (21) has the appetite to get to the ball carrier behind the line of scrimmage as seen here. (Photo courtesy of Brian Smith)

Micah has taken his father’s advice and has actually been a constant leader on the Jaguar team ever since he was a freshman. It is one thing to start for a team four years in high school, but it is another thing to be a leader for four years and that was what he was able to do.

“Sometimes, when the team will be losing by a lot, the seniors would show fatigue and not compete,” Al said. “Well, he was out there as a freshman giving his all even when the outcome was out of reach and even telling the seniors to put forth effort.”

Leadership and effort are two things that go hand in hand when describing Micah Saucier as he takes those two qualities by heart. As an upcoming senior, he wants to spread those qualities to the rest of his teammates in order for Pope John Paul to have a breakthrough season this year.

“At the end of the day, I want everybody to be 1% better than they were before,” Micah said. “We need to put the past behind us.”

The Jaguars are looking ahead as they hired a new coach in Charlie Cryer. Cryer was formerly a head coach at St. Louis and Vermilion Catholic. He is the type of coach that is willing to rebuild a program that has let go three coaches in four years. For Micah Saucier, he sees this as a great opportunity to help be a building block in turning the Jaguar football program around.

“I am super excited about Coach Cryer coming to our football program,” Micah said. “The thing that I liked most was that he made sure that everyone played smart and aggressive. He wanted us to play smash nose football and that is my game.”

Micah Saucier has accomplished a lot even though he has not been apart of a winning team during his high school career so far. One of those honors included sharing the in game sack record with three against St. Patrick, but he wants to eventually break his own record as well as others over the course of the season.

“I want to break my own sack record and have the record most tackles in a game,” Micah said.

Records and stats are not the only things that he wants to accomplish as he also wants to receive an offer from a college. As of right now, he is 6-1, 181 and wants to gain some good weight before the end of the season.

“I have been working hard to get my weight up,” Micah said. “I have pushing on an insane diet plan. At the end, I want to be 225 when it is all said and done.”

Fortunately for Micah Saucier, he is on the right track to getting bigger. According to his father Al, the Sauciers have had a very impressive family tree with a lot of them sending their games to the professional level at the sport they competed in.

“My grandfather Luke Saucier led St. Stanislaus College to the team’s only basketball national championship and played at Loyola in the 1920’s. He also set some track records that are still held to this day at Loyola,” Al said. “My cousins also had impressive careers including the late Wendell Ladner, who played basketball for the New York Nets with Julius Erving (Philadelphia 76ers) and Steve Foley, who played at Jesuit, Tulane, and even in the NFL for the Denver Broncos. He is actually the Broncos’ career leader in interceptions. Not to mention, we are also distant cousins with NFL Hall of Fame quarterback Brett Favre (Southern Mississippi/Atlanta Falcons/Green Bay Packers/New York Jets/Minnesota Vikings).”

If you think that is impressive enough, Saucier is the youngest out of four and his siblings are also not too shabby at their sports.

“Micah’s oldest sister Nicole led Pope John Paul to a softball state championship and was an All-District basketball player, but at the same time, she was a three year starter on the Southern Miss lacrosse team,” Al said. “His other sister Ashley played three different sports including basketball, softball, and volleyball at Pope John Paul. His older brother Wade also played defensive end and linebacker like Micah at Pope John Paul II.”

Not to mention the patriarch of the family Al Saucier Jr. was also a big time athlete in his day.

According to his father, Micah is actually bigger now than Steve Foley was when he was in high school. Like the relatives before him that have made their mark in athletics, he is ready to leave his own mark.

“I don’t model my play after anybody else,” Micah said. “I am my own player. I always want to be the hardest working player and have a spirit that nobody can match.”

The youngest member of the Saucier family is an impressive young man that is also an alter server, running for student council president, a four sport athlete, and even participated in some plays for the drama club. He is a natural leader that has one of the biggest motors that you will see in a football player. Micah Saucier might not be a name that a lot of people know now, but just like the rest of his family members, he has a chance to leave his own legacy and write his own chapter in the Saucier family book.