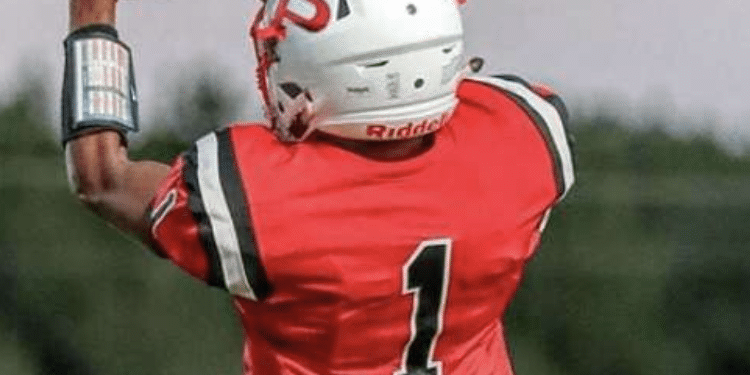 There are a lot of athletes around the state in which sports come natural to them. One of those players is Pickering High School senior Deshawn Jackson. Prior to this season, Jackson was used to making plays on the hardwood. In 2019, prior to the cancellation of spring sports because of the Coronavirus, Jackson made not only 1st Team All-District honors, but District MVP honors by averaging an impressive 28 points per game along with ten rebounds per game. Also, include the fact that the versatile Pickering High School athlete partakes in track and field, it was a forgone conclusion that he was also going to give football a try. Entering 2020, Jackson never tried out at football, but although he is late to the party in comparison to other players at his position, he has not lost a step.

“This year is actually my first year playing football,” Jackson said “I didn’t realize I was this good until I’ve practiced and have seen that I could actually do well at what I do best.”

What he does best is make plays and just by using his sheer athleticism has made the transition easier in playing a sport for the first time.

“Basically playing both sports makes it easier, but some aspects that I’ve brought to playing football is me having good footwork and being able to jump over defenders and not being scared to have contact with somebody hitting me,” Jackson said.

At 6-2, 180 pounds, the potential two sport All-District selection uses his basketball vertical jump to help him out leap defenders for jump balls. Just in the team’s first four games in general, Jackson has had seven of his first 14 touchdowns go for touchdowns. While averaging 26.8 yards per catch and 107.3 yards per game during that time period, Jackson established himself as one of the most exciting players to watch in the Lake Charles area. Still, Jackson is new to the game and needs to refine more things in order to become the complete receiver.

“I think I need to improve on my route running and getting faster,” Jackson said.

Although Jackson wants to focus on becoming the best he can be as a receiver, he also plays in the secondary as well for the Red Devils. In fact, our very own recruiting guru Lee Brecheen sees a bright future for the two way Pickering rookie starter on the defensive side of the football.

“Deshawn Jackson is a hidden gem for a DI school at cornerback,” Brecheen said. “At 6-2 in height and 6-5 in length, he is going to be a 200 pound defensive back. He runs really well, and I have already seen him take plays to the house as a receiver. He’s got both speed and toughness. Because of that, he is the biggest sleeper cornerback in the state and is a diamond in the rough. I truly believe he can become a starter for a SEC team like Ole Miss, South Carolina, Vanderbilt, or Kentucky in the end.”

As far as colleges are concerned, they are not ignoring what he is capable of.

“I have a couple of schools in interest and have offered like Mississippi State, Southern Miss, Grambling, Northwestern State, Tulane, Southern, Arkansas Monticello, and there are plenty of more still to come,” Jackson said.

There is no doubt that Jackson does not lack confidence in terms of his ability and being a player that could play at the next level in not only one, but two sports will only help that confidence even more.

“I’m not choosing between both sports,” Jackson said. “I love them both, but I am undecided on both sports right now.”

What he is not undecided on is what he wants in a program that he chooses.

“I’m looking forward for a college that I can fit in and have a great relationship with the coaching staff as well as getting some playing time on the field,” Jackson said.

Although Jackson would prefer playing wide receiver, he is also getting recruited to play defensive back. Having the ability to do both will play dividends in the end.

“I would say being athletic, catching the ball at a high rate for a receiver, and doing most things that people can’t do are my biggest strengths,” Jackson said.

Being able to not only take a chance and raise the bar by playing another sport has not only helped Pickering’s Deshawn Jackson in terms of his versatility, but it has helped him jump through doors when it comes to be given an opportunity.

Click the link below to check out Deshawn Jackson’s senior highlights: