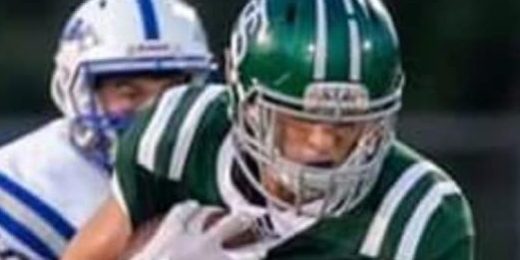 Colby Chelette’s journey as an upcoming senior has not been an easy one, but it has been a fulfilling journey that has plenty of ups and downs. Going back to middle school, there have been a lot of ups for Chelette leading his middle school team to a championship.

“Helping my middle school team win the parish championship and when I played travel football, we won the 12u National Championship tournament against the Lafayette Swamp Cats,” Chelette said.

Making the adjustment from middle school to high school seemed like a natural transition for a versatile playmaker in Chelette.

“I would say my biggest strengths are being physical and being a team player that can play both sides of the ball at any time,” Chelette said.

At 6-2, 205 pounds, Chelette has played both running back and defensive end for the team over the last couple of seasons. Now, he is even adding another position to his arsenal.

“I have learned to be a 100 percent athlete,” Chelette said. “On the defensive side of the ball, the coaches have moved me from defensive end to outside linebacker. In terms of college, I would prefer to play running back because I feel like I can help a team most in that position, but I can play outside linebacker just as well.”

With his ability to play multiple positions, Chelette was going to have plenty of opportunities to showcase what he could do in 2019. Unfortunately, the South Terrebonne High School rising star did not finish the season like he wanted to.

“Last year, I tore a ligament in my left foot and also had a fracture in the same foot along with having turf toe on my right foot,” Chelette said. “It was very tough for me sitting on the sidelines while my teammates were on the field. Although I tried my best on the sidelines to keep them pumped up and focused on the game, I feel as if that will help me become a better leader on the field this year for my teammates. Now, this season, I am healthy and ready to play.”

That is certainly good news not only for his teammates, but Chelette as well. Fortunately, things have turned out to be much brighter after the tough end of his junior season. For starters, he recently received his first offer from Louisiana College. He is also becoming bigger in the weight room as well as continuing to use his track speed. There is plenty of motivation for Chelette to return back to a healthy season already after missing a lot of 2019, but there is another unique factor that has given the South Terrebonne upcoming senior plenty more reasons to give it his all in 2020.

“First of all, I am a very diverse player that can play anywhere a team needs me,” Chelette said. “Secondly, I have a beautiful one month daughter. I am playing with more purpose now than I ever had before. In other words, I’m playing the game for more than just me now.”

Shortly after receiving his first collegiate offer, Chelette became a father when his daughter Brinley Rose Chelette was born. The experience has surely humbled him even more at a young age.

Now, more than ever combined with the urge to get back on the football field as well as be on the field with his teammates, Chelette cannot wait to play again on Friday nights.

“My message to my teammates is that I’m never going to back down in any situation that I am put into, and that I’m going to be the leader they deserve,” Chelette said.

The Gators football will need the likes of Chelette to lead the program as for the first time in 30 years, there will be a new head coach commanding the sidelines after the resignation of longtime head coach Richard Curlin. Taking his place is longtime assistant coach Archie Adams. Because of Adams’ familiarity with the program, the transition has been somewhat smooth even during a coronavirus pandemic.

“At the beginning not being able to be within six feet of my teammates was difficult, but our coaches motivated us to work harder and now it shows on the field,” Chelette said. “It has been very positive and motivating for the entire team. You can definitely see a difference from last year to this year. Our coaching staff is more serious about this year than ever before and the team as well.”

In 2020, there is perhaps no player that will be working harder than this two sport athlete knowing that this game means so much more than him. Because of that, there are some goals that he would like to accomplish by the end of this season.

“I have personal goals, but my team’s goals are first of all to win the district championship, go into the playoffs, take each game one at a time, and finally winning a state championship,” Chelette said. “My personal goals are to be the best running back in Louisiana and to receive a college scholarship.”

Colby Chelette has always been a motivated player that gives it 100 percent, but now that he has a family to think about, it will be hard for even injuries to slow him down in 2020.