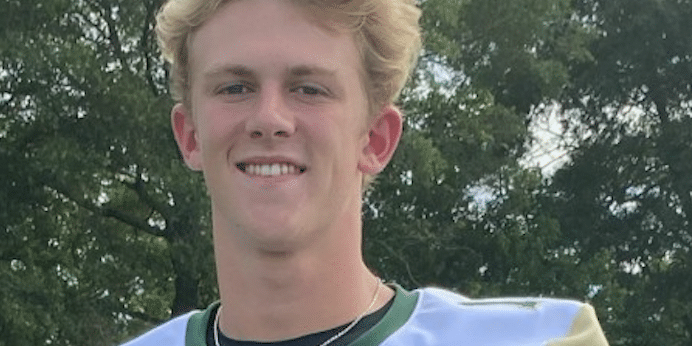 Heading into the 2019 season, everyone that knows Louisiana high school football can expect the Ouachita Christian Eagles to compete for a state championship, but not everyone knew that the Eagles would be as dominant as they showed last season on the team’s way to its seventh state championship victory, especially with a first year starter at quarterback in Hunter Herring. Even though Herring was a first year starter at quarterback, it was not his first time seeing action in the green, white, and gold according to Louisiana Football Magazine’s recruiting expert Lee Brecheen.

“Hunter Herring is a phenomenal player that is now seeing his potential at quarterback,” Brecheen said. “He was a wide receiver and defensive end to start off his career. Even though he is playing quarterback, I think he could make one heck of a tight end in college, and could potentially become a Foster Moreau (Jesuit/LSU/Las Vegas Raiders) type of player.”

Seeing a player like Herring, who is currently 6-4, 207 pounds and can run a 4.7/40, there are good reasons why he could fill his frame and become a great tight end, especially someone as versatile as he is. However, with all the success that he has had at that position, Herring would love nothing more than to improve on his success at quarterback.

“With the work and time, I’ve put in at quarterback, I want to remain there and prove myself at that position,” Herring said.

Who wouldn’t blame him after the season he has had as the Ouachita Christian quarterback exceeded his own expectations in his first season by throwing for 1,794 passing yards and 27 touchdowns while rushing for 1,123 yards and 25 more touchdowns. Overall, the dual threat quarterback accounted for 2,913 total yards and 52 total touchdowns in 2019. Those numbers not only guided him to the Class 1A Offensive MVP, but it also guided both he and his team to the Division IV state championship game. There is a popular motto that the best players play their best in the biggest games, and for Herring, there was no bigger game than the state championship. It was a performance for the ages as he led the Eagles to its seventh state championship in program history all while earning the game’s Most Outstanding Player honors by accounting for 335 total yards of offense and seven total touchdowns with four on the ground as well as three through the year. For the record setting quarterback, it was a season to remember.

“Last season was honestly a dream,” Herring said. “It was a week by week thing for me. I just kept working and it all came together the longer I worked. Although, I didn’t know how the season would end, I was confident it was our year.”

For a player to have that type of season in which nothing could possibly go wrong, it will be very tough to have an even better senior season, but for the three star quarterback, there is always something to improve upon.

“There’s always something to work on, but definitely, I want to become a more polished passer,” Herring said. “I have been working hard this offseason to just master that craft and to get that muscle memory.”

Along with winning another state championship, some of Herring’s personal goals for this upcoming season are to throw for over 3,000 yards as well as run for over 1,500 yards. Although the traditional pocket passers have ruled college football and the NFL for years, it is the athletic quarterbacks that have ruled the new millennium at that position. Guys like Joe Burrow (LSU/Cincinnati Bengals) and Trevor Lawrence (Clemson) that have similar skillsets to Herring on being able to run the football make him an intriguing player that every program is trying to find.

“It may sound really cliche to say, but I really focused on Joe Burrow and Trevor Lawrence,” Herring said. “They can throw the ball wherever in the tightest windows. They extend and make those big time plays with their legs, and I really try to play that same way.”

The versatile quarterback wants to perfect his craft as a passer, but he also truly enjoys just being a football player and show his toughness as well as his athletic ability when he does run the football.

“Although both throwing and running makes it so fun to be a dual threat guy, I think I breathe a little better after throwing for a long touchdown, but nothing beats running over somebody for a touchdown.”

Bench pressing 235 pounds, squatting 345 pounds, and cleaning 265 pounds makes this physical running quarterback not your average joe in the weight room either. Along with being a football player, Herring is a talented baseball player as well. In fact, he is so talented that he was once a baseball commit to ULM. However, it all changed when he received his first DI football offer from UL. Just days later after receiving that offer, Herring decided to de commit with the Warhawks and recommit to play football for the Ragin’ Cajuns. For the All-State quarterback, it was not a tough decision to make.

“After much thought and prayer, football was what my family and I believed would take me farther,” Herring said. “It was an easy decision with UL because of what they have going down in Lafayette. It felt like home since the time I visited. Coach Napier is evolving guys better than a lot of Power Five schools, and I wanted to be a part of that.”

Making the decision to not only flip schools is hard enough, but to also flip to another sport as well is also tough, but for Herring, he is totally committed to playing football in college.

“It is a possibility that I continue my baseball career, but now, I’m mainly focused on football and mastering my craft,” Herring said.

Even though other schools may offer Herring, he wants to tell the Ragin’ Cajun fans out there that Lafayette is indeed the place for him.

“UL gave me an opportunity before any Power Five school reached out, and that means a lot to me,” Herring said. “Right now, I strongly believe UL is my best fit, and I want to be part of that winning culture.”

For Hunter Herring, there is not a better way to end a bright season than to make a big decision for a bright future.