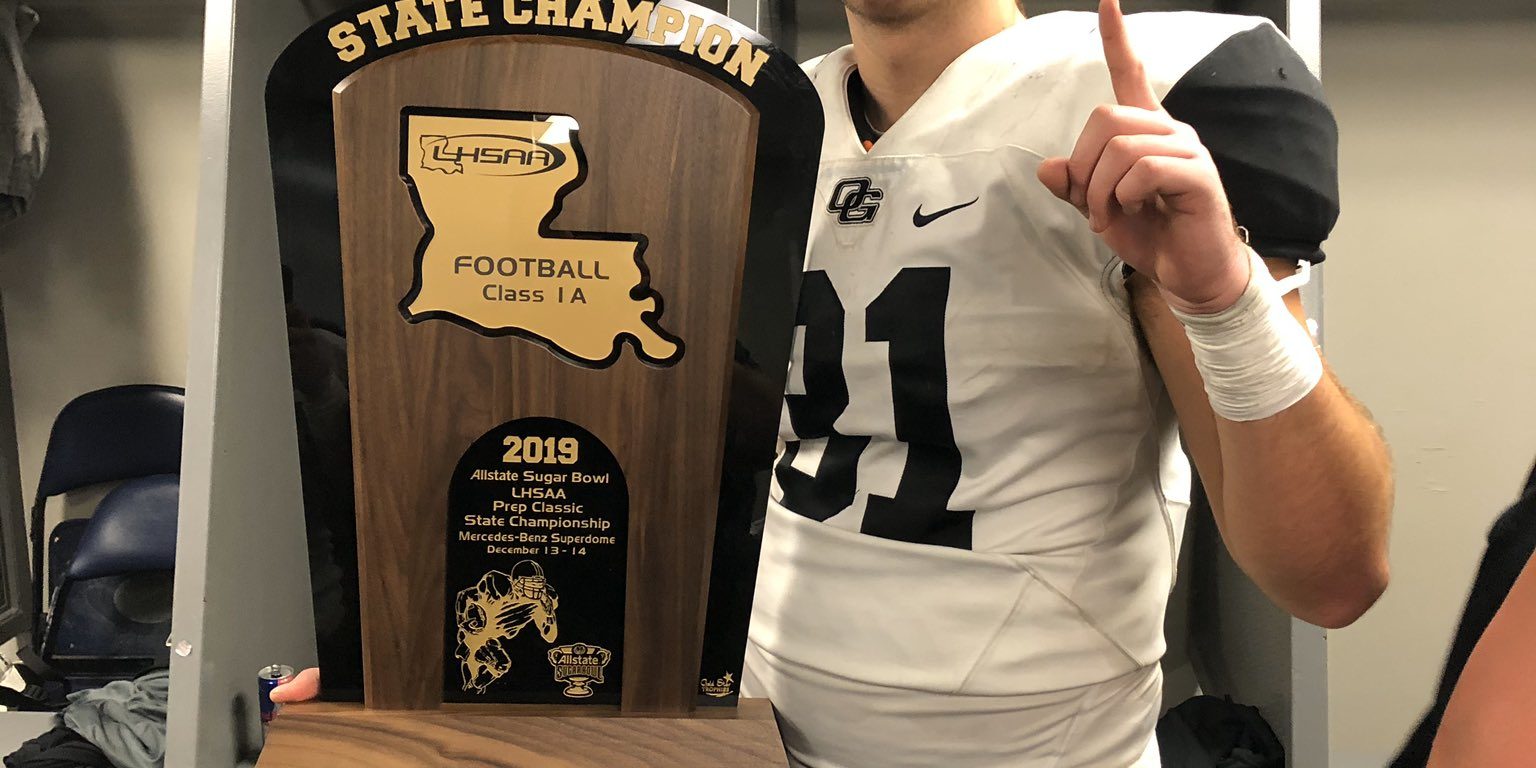 The Oak Grove Tigers enter the 2020 season after finally breaking through with a Class 1A state championship in 2019 under head coach Ryan Gregory. Now, Coach Gregory and the Tigers have a new task to take on in 2020, and that is defending that state championship crown. With the amount of talent that there is at the 1A level, it could be a tall task, but it is much easier when teams like Oak Grove not only have the talent, but also the blue collar mentality of players like upcoming senior tight end/fullback Dalton Allen.

“I think we were more prepared as a team in 2019 because we lost in the state championship to Kentwood the year before, and we knew what we had to do in order to go back to the Dome,” Allen said. “Coach Gregory and the coaching staff did a great job of making sure we were focus in what we had to do.”

At 6-4, 230 pounds, Allen is one of those old fashioned, blue collar football players that likes to go and do the dirty work for the team that often goes unmentioned.

“The biggest strength to my game is my physicality and that I do not mind getting dirty,” Allen said.

Allen’s ability to block in the running game has helped pave the way for fellow Oak Grove runners Otis Moore and Ron Craten to account for close to 3,000 rushing yards and 37 touchdowns. Although Allen may be more known as a blocker, he has also shown that he could make plays on the defensive side of the football as well.

“Besides playing tight end, I also play outside linebacker as well,” Allen said.

“Dalton Allen has a chance to be special,” Brecheen said. “He catches, runs, and blocks like a future NFL tight end.”

For the All-State selection, he wants to one day be like a current Super Bowl champion, in which Allen models his game after.

“I like Travis Kelce (Cincinnati/Kansas City Chiefs),” Allen said. “He makes all the other NFL players look like little kids out there.”

Allen’s toughness, mindset, and skills all have similarities to a NFL superstar like Travis Kelce at a young age. With a 6-4, 230 pound frame to go along with 4.9/40 speed, there are a lot of college football teams that are interested in his upside.

The offers and visits have transpired before the coronavirus outbreak, so the intrigue with this prospect from Oak Grove is already there. As far as the visits are concerned, there was one campus that he was impressed with.

“Probably, my favorite facility is Arkansas State,” Allen said. “They have a brand new indoor practice facility and a new football stadium. It was really nice.”

Although Allen is grateful for those schools’ interest in him, there is one school in particular that he is waiting for an offer from.

“LSU is definitely an offer that I always wanted,” Allen said. “I have been a LSU fan since I was born, and I like what they are doing with their program.”

In order to attract the attention of the defending National Champions, the Oak Grove standout has set a personal goal of scoring 20 touchdowns, but he has an even bigger team goal in mind, which is to repeat as state champions in 2020.

“I think that our offensive backfield and our defensive secondary is going to be pretty solid, but we are going to have to replace some linemen, which is our biggest concern,” Allen said. “I think that everybody finds their role, then we should be fine.”

Despite the outbreak, the Oak Grove coaching staff is making sure that Allen and his teammates are doing their job despite not being able to meet in person.

“Coach Gregory is showing all of the skill guys the route tree and what we need to know on Hudl,” Allen said. “Then, Coach Green, who is our strength and conditioning coach, has given us workouts in which we need to do at home.”

Entering the 2020 season as the defending Class 1A champions, there is obviously going to be a big target in order to knock them down, and while also facing a difficult schedule, it will be even tougher, especially in its district matchup against the defending Division IV state champion Ouachita Christian Eagles.

“I am looking forward to playing OCS the most,” Allen said. “It has always been a rivalry since we started playing them. It has always fun to beat them even though we lost to them last season. It should be a great matchup between two state championship teams.”

If the Oak Grove Tigers are willing to complement Dalton Allen’s mindset to get down and dirty in the trenches, then, there could be a strong possibility that Coach Gregory’s bunch could be in for a successful season in its state championship title defense.

Click the link below to check out Dalton Allen’s junior highlights: