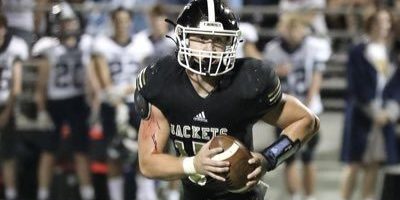 Oak Forest Academy’s senior athlete John Henry White is used to playing different roles and taking on more of a versatile role for his senior season was not surprising considering all the positions he has played over his career.

“For my sophomore year, I was the starting running back for the first half of the season, and I was also playing some free safety on defense,” Henry White said. “Then, for the rest of my sophomore season, I moved to quarterback and played some defensive packages. In my junior season, I primarily played quarterback for the majority of the season and I got into some packages on defense as a safety in third and long situations. This past season, I played all over the field starting at quarterback, outside linebacker, middle linebacker, free safety, and then for the last four to five games, I played running back the entire time.”

Playing all over the field makes it pretty easy for this 5-10, 205 pound do it all athlete to be compared to New Orleans Saints’ Swiss Army Knife Taysom Hill.

“I feel like I am Taysom Hill because I feel like I was thrown all over the field this year, except probably on the offensive and defensive line” Henry White said. “There were times I also lined up at receiver and caught screen passes.”

The Yellow Jackets’ version of Taysom Hill is also being recruited as an athlete with schools offering him to play at different positions depending who is recruiting him.

When it comes to what position the versatile playmaker wants to play at the college level, Henry White does know what he would like to play at.

“I enjoy playing running back and I enjoy commanding the huddle as a quarterback, but I thought I was most successful this season as a running back,” Henry White said. “I had a good first half of the season this past year, but when they moved me to running back, that is when it really took off. It’s fun and you don’t really have to think about much, except getting the ball to run. Quarterback takes a lot of thinking into each play when it comes to footwork, looking a the defense, and making sure the right play is called. That’s why I really enjoy playing running back.”

Louisiana Football Magazine’s recruiting guru Lee Brecheen also can see him as a running back or as an athlete at the next level.

“John Henry White is strong and ripped up with 4.6/40 speed,” Brecheen said. “He has great burst when he runs the football and has a high IQ of the game with his father being a long time coach.”

“It is 30 times harder playing under your dad because he is going to be tougher on you than any other coach,” Henry White said. “My dad wants to be perfect on every single play. It would get personal sometimes at practice, and even when I got home, I still would hear what I could have done better in practice or in a game. However, I believe it has molded me into the player that I am because I am able to take constructive criticism now. It also helped me figure out the game better because I get to go home and get some extra coaching while other kids are at home relaxing. I get to ask him questions whenever I wanted to and he would bring the whiteboard in my room to show what we would run that week. If it wasn’t for my dad, I wouldn’t have been able to take constructive criticism well.”

That mental toughness, football IQ, and versatility are all thing that he has picked up from playing football for the Yellow Jackets, and now, he is looking forward to see how his skills translate to the next level.

“My knowledge of the game sets me apart,” Henry White said. “When you are forced to play almost every position at a small school, you learn more about the game than if I played quarterback my entire high school career. When I am on offense looking at the defense, I notice a lot of the tendencies in the secondary because I played in the secondary. When I played running back, I notice the linebackers sneaking up because I played linebacker too. Then, when I am on defense, I notice how the wide receivers line up if it is going to be a pass or not. I feel that my football IQ separates me from a lot of players because I know how to look at a defense because being at a small school, you constantly play different positions.”

While some players may not fully embrace playing more than one position and having your father coach you full time, John Henry White takes it head on as it helps him become the best player he can be.

Click the link below to check out John Henry White’s highlights: