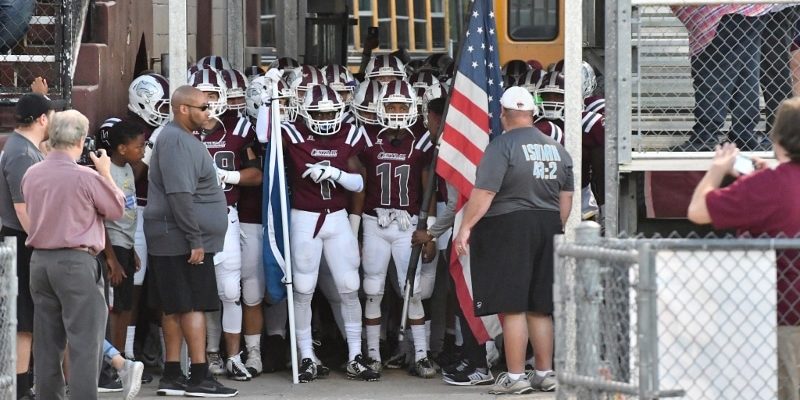 August 11, 2016 is a date that almost everybody in Louisiana will never forget and not for the good. On that night, the state of Louisiana suffered one of the worst natural disasters in its state history. The Great Flood of 2016 damaged over 100,000 homes and killed thirteen people throughout the state. Thousands of people had to move to shelters and by the next day, Governor John Bel Edwards declared that the entire state of Louisiana was in a state of emergency. Many schools have suffered damages to not only their facilities but their faculty has been affected as well. Many schools in the 4-5A district really suffered as schools such as Denham Springs High School, Walker High School, Zachary High School, etc. received many damages to their school facilities and athletic facilities. Another school in that district was affected was Central High School in Baton Rouge. When a team has an experienced head coach like Sid Edwards, usually, that coach will tell you that he has seen it all but not even Coach Edwards can prepare his team for this situation.

“It was definitely a big situation,” Coach Edwards said. “That time frame of three to four weeks ,which we were in the middle of everything, put a lot of strain on everyone involved with the school.”

This is what the Central football practice facility looked like after the flood. (Photo provided by David Dykes)

After the flood, Coach Edwards checked on everybody on his team (coaches and player) to see if everybody was alright from the flood and he found out that everybody on his coaching staff and everyone of his players were somewhat impacted by the flood.

“I got around 80 football players,” Edwards said. “68 of the 80 players’ homes were flooded and four of my coaches’ homes were also flooded. Of course, when you are in a community that is in Baton Rouge, we didn’t have a player that was not affected. The 12 players that didn’t have flooded homes have family members that did have their homes flooded.”

Many players and coaches couldn’t believe the damage that was suffered in their community that they all grew up and lived in. Central High School assistant football coach David Dykes was one of the coaches that experienced his home being flooded. Even though that he was suffering through the flood, Dyke’s goal was to help as many people as possible in this time of need.

“It’s the way we live around here,” Dykes said. “I happened to be with some buddies and staying with a friend. We heard that the river was coming up in Livingston. We were able to get my boat out and by the time we did that,  we started getting calls and started to go around the neighborhood and pulling people out.”

Dykes saved about eight to ten people but his courage and his timeliness was a big part why those people were saved.

“The first person that I pulled out was my wide receivers coach’s mother and we got in and got her,” Dykes said. “There was also a 92 year old lady’s son out in the middle waving boats and he was waist deep in the water. We told her and her son that we were coming back to get them. When we came back, he was chest deep in water so if we didn’t pull him out, he could’ve been swept by the current.”

This was one of the many horrific stories that the community had to go through and there are many more unsung heroes like Coach Dykes who just wanted to help people in need. Dykes will never forget seeing his entire community going  underwater and he knew that he had to do something because of it.

“One of the biggest  landmarks in Central is Magnolia Bridge,” Dykes said. “I basically drove through Magnolia Bridge in my boat and most of the roads were in 10 foot deep water. It’s just so surreal of what that river can do. We wake up at 6:00 in the morning and we see the water rising up and to keep getting phone calls from coaches, parents, and students, we knew that we couldn’t just sit around.”

When the natural disaster finally did all its damage, the school faculty and community checked on how badly damaged Central High School was.

After the flood, all the schools in the district came together and helped each other out. For example, Denham Springs High School let Central High School use their practice field when they needed to and Central students helped with homes around the Denham Springs area. Even though these teams hate each other every Friday in the fall, they realize that they are part of a bigger family and they need each other to get through this terrible time.

“We have been blessed by the people in our district and the ties that bond us,” Edwards said.

Coach Sid Edwards knew that his team was behind schedule already because when the team came to practice again after the flood, 17 days have passed by and the team had their practice, since the flood, on the Monday before the first game. The team’s jamboree was also cancelled. Even though the team lost a lot of ground and practice time, the team was very focused and resilient and had some big time players that stepped up and took a leadership role on the team.

“Kyle Kepper and Andrew Harris ,our two linebackers, as well as Josh Herbert and Edgar Janise and Darryl Lavigne were all guys that step up and were catalysts of helping us get back together as a team,” Edwards said.

David Dykes was also impressed by the team’s resiliency and coming together this quick after the flood.

“Our kids were really resilient,” Dykes said. “They definitely bounced back quick.”

Before long, Central was to play their first game of the season on September 2nd against Mentorship Academy. The atmosphere was crazy for that game in front of the Central fans. They knew that it was a time in which the community can come together and not just worry about their homes and their community but to keep their mind off that and enjoy watching their Wildcats play.

Coach Edwards feels that Central football is the only thing that brings the community together and that’s the reason that night was special.

“We were all back together that night,” Edwards said. “In Central, there is no bowling alley. There is no golf course, no movie theater, no mall but the entertainment value here is Friday nights.”

That magical night lead to a dominating win over Mentorship Academy 67-6. The team also defeated powerhouse Dutchtown 13-10 the very next week after trailing 10-0. According to Coach Edwards, it was the biggest win of the young season for the team. As of right now, the Central Wildcats are off to a great 4-2 start and are looking for a great second half to the season. When the season began, Coach Edwards gave the team a message and the message came in form of a scripture verse. Keep in mind, that this is a public school, Coach Edwards was at Redemptorist High School and Jesuit High School so he loves adding scripture to his speeches. The one scripture verse that he gave to his team was Isaiah 43:2. The scripture verse was also on every coach’s T-shirt every game of the season. Coach Edwards explained the verse and what it meant to his football team.

“The reason why I chose that scripture verse is that Jesus said the waters will come and they will not carry you away,” Edwards said. “It is basically saying that these things are going to happen but I won’t let it take my spirit or bring me down. The front of our T-shirt is symbolic of our brother Devon Gales (former Central and Southern football player that was paralyzed against Georgia in 2015) and so what he went through and what our community went through ties together.

For those of you that are curious on what the scripture verse says, it says this:

The Central High School community and the football team has embraced that message. The Great Flood of 2016 may have affected their homes and communities but it definitely has not taken away their spirit and their love for Wildcat football!