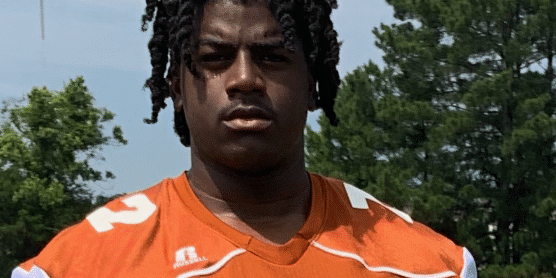 The Northwood Falcons have to go through a lot of turmoil for the upcoming season. For starters, the program will have to replace arguably the greatest quarterback in program history in Luke Bogan (UL) along with one of the anchors on the offensive and defensive line in Cory Marshall (UL). For guys like fellow OL/DL Cameron Foster, Marshall has played a big impact on his play.

“He played a big role,” Foster said. “He was like a big brother. He pushed me harder in the weight room and on the field.”

Marshall has helped push Foster in becoming one of the best lineman in the state. At 6-3, and close to 300 pounds, Foster has the frame, toughness, and versatility to play among the best programs in the country. Even with Marshall on the team last season, one could easily make the argument that Foster was the best lineman on the team. Entering his fourth year as a starter, which is an incredible feat by itself, the Northwood two way player was named 1st Team All-District the previous two seasons along with being named a team captain not only for this upcoming season, but even last season as a junior. Despite being known as a vocal leader, Foster believes that he could improve on that role even more this season.

“I want to become more of a verbal leader,” Foster said. “I’m used to watch me and do what I do, but now, we have a lot of guys on the team that I have to watch out for.”

He along with Austin Brown are adjusting to their new roles as Foster is taking even more of a leadership role his senior season and the same could be said for Brown after making the transition from offensive coordinator to head coach.

“Coach Brown and I came to Northwood the same year and ever since then, he’s been there. He has been doing great,” Foster said. “He’s changed the way we approach the game. He’s a great coach and a fun guy to be around.”

The Coronavirus pandemic has made it tougher for the Falcons football program to make the quick adjustments necessarily before the start of the season.

“During COVID, Coach Brown is still making sure we get our workout in and are being safe,” Foster said. “We have to clean the weight room after every time we use it, and we also have to mask up when we don’t have our helmets on.”

The pandemic has also made the recruiting process even more difficult for the Northwood senior lineman as he has not been able to take as much visits as he has used to prior to the virus outbreak. For Foster, taking those visits and meeting with coaches in person makes the process so much easier, especially after receiving offers from the likes of Air Force, Northwestern State, Alcorn State, Grambling, Lamar, McNeese State, Southern, Southeastern, and Northeastern.

“With COVID shutting everything down, I was only able to visit two colleges, but Northwestern and Lamar have showed lots of love taking me around campus on FaceTime,” Foster said.

No matter where Foster decides to sign at the end, he is certain of what he wants to do with his time in college and beyond.

“I want to become a starter, be a leader, and have a big role in the team academically,” Foster said. “I want to get my masters and major in Sports Communication and minor in business. At the end of my college career, I plan on going to the NFL, but if that doesn’t work out, I want to be a college sports analyst.”

Foster wants to add his name to the list of players like Marcus Spears (Southern Lab/LSU/Dallas Cowboys) and Booger McFarland (Winnsboro/LSU/Tampa Bay Buccaneers/Indianapolis Colts) that were on the cover of Louisiana Football Magazine and later would go on to become successful sports commentators at the end of their playing careers.

“It was a blessing to be on the cover of Louisiana Football Magazine,” Foster said. “I never thought I’d be considered as one of the top 20 players in North Louisiana. I always worked hard, and it’s paying off.”

Playing and being dominant on both sides of the football showed how hard Foster has been playing as last season, he had 27 pancake blocks on the offensive line along with 15 tackles, a sack, and a forced fumble. For Foster, he believes that his versatility sets him apart from a lot of different players.

“Knowing both sides of the ball is a big advantage because I know what moves to use in different situations,” Foster said.

Not only does Foster know what to do on both sides of the football, but he also watches how other professional players at his positions excel.

“When I’m playing offensive tackle, I try to play like Tyron Smith (USC/Dallas Cowboys),” Foster said. “He is just somebody a defensive end doesn’t want to play against during a game and when playing defensive tackle, I like Aaron Donald (Pittsburgh/Los Angeles Rams) because he is big, physical, and good with his hands.”

As far as what position Foster wants to play at the next level, there is no discussion for him.

“I’d rather play on the defensive line,” Foster said. “I like to go after the ball and hunt.”

Versatility does not limit Foster just on the football field, but he is a man of different talents. Besides football, the Northwood team captain is also a state champion shot put thrower for the school’s track team and is also a talented chef.

Like mentioned in the beginning, despite the turmoil of veteran players from this past year’s class now gone, it is players like Foster that can continue to keep the program’s momentum going in 2020.

“My goals for this year are just to get better each game and build on the skills I already have,” Foster said. “We are back and ready to roll.”

Already being a big man himself physically and also having a big personality off the field makes Cameron Foster the perfect candidate to become the big man on campus for the Northwood Falcons.

Click the link below to check out Cameron Foster’s junior highlights: