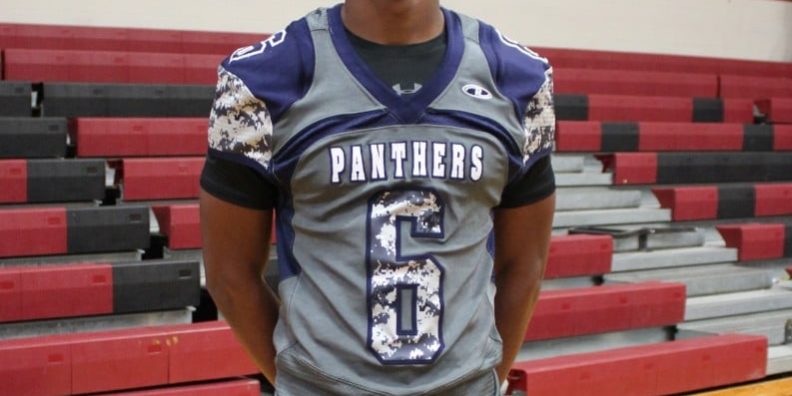 Northshore High School is coming off a very frustrating 2017-2018 football season. Outside of its 27-7 loss to eventual state champions Zachary High School, all of the Panthers’ losses came within seven points or less. Northshore was a team that had enough talent to make a strong surge in the playoffs, but none was bigger than senior safety Jeremiah McDonald. McDonald is a 6-foot-3 freak athlete that has a tremendous upside heading to the next level. McDonald has been playing football for approximately 11 years. He shows the talent of a player with his experience and athletic ability. However, many people are unaware that McDonald started his career on the offensive side of the ball.

“I started playing running back my first year and I did really good,” McDonald said. “Then, I switched to quarterback for a while during little league. From seventh to ninth grade, I played receiver and since sophomore year, I’ve been playing safety. I enjoy playing safety the most where I am able to to somewhat call the shots in the defensive backfield.”

Growing up, McDonald idolized LaDainian Tomlinson (TCU/San Diego Chargers/New York Jets) because he initially played running back before any other position. His Louisiana roots also led him to be a fan of the New Orleans Saints and the LSU Tigers. McDonald has the skill set to excel in multiple positions, but he was used primarily for defensive purposes in high school. Along with playing football, McDonald played basketball for Northshore High School. McDonald experienced great success at basketball at an early age, success that could have overpowered football.

“Freshman year, I started on the varsity basketball team and got Honorable Mention,” McDonald said. “I was better at basketball at the time, but I decided to focus on football instead. I mainly stopped because I realized I had a better chance at making it to college football than basketball since there are more positions for me to choose from.”

Playing in a very competitive district with teams such as Mandeville, St. Paul’s, and Slidell, it makes for great games and plenty of reasons to stay motivated. A tough district typically forms great rivalry games as well.

“I enjoyed playing a lot of teams in our district, but St. Paul’s would be the most memorable,” McDonald said. “I’ve gone against them four times in high school and didn’t get a win against them. Everyone on our team strongly disliked them and our last game against them was a hard-fought game.”

As a natural leader for the team, McDonald chose to lead his team by example more so than one who talked about doing the things necessary to win.

“I was more of a lead by example kind of person,” McDonald said. “There were time where vocal leadership was needed, but I let my actions do the talking for the most part.”

Moving on from high school football, McDonald will miss the high school level and understands it will not be the same in college.

“One thing I will definitely miss about high school football is the memories I made throughout four years playing and competing with the same guys since I started playing football in 2007,” McDonald said.

McDonald decided to take his talents to the Big 10 conference and is currently enrolled at Northwestern University in Evansville, Indiana. He says the city is huge with great football and what sticks out to him about the University is the academics. McDonald was a hard-commit with the Wildcats as he was committed to Northwestern prior to his senior season.

“I look forward to just playing football,” McDonald said. “One team in particular I know the team will be ready to play with a vengeance is Wisconsin. We lost to them last year by 10 points, which kept us out of the Big 10 championship game.

There are plenty of people that helped McDonald throughout his journey to get to where he is today, but he gives most of the credit to his parents.

“I would say the bulk of my success would go to my parents who brought me to every football camp I wanted to go to, never missed a football game, and supported me through everything,” McDonald said. “Also, Coach Mike Bourg who always helped me in the recruiting process with talking to coaches and putting out a good word about me. In addition to that would be my teammates and coaches throughout my whole football career who have gone to war with me and helped me love the game of football.”

McDonald will be looking forward to the next chapter in his life and plans to make the most of every opportunity given to him.