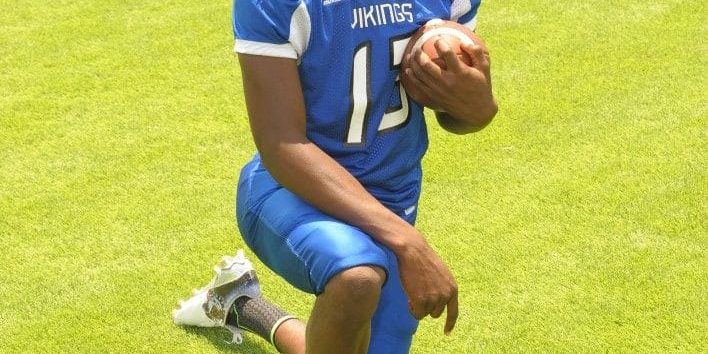 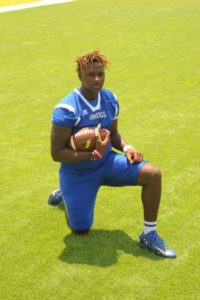 In the Baton Rouge area, it can be argued that there is not a program with more stabilization than the Northeast Vikings. The Vikings are led by one of the best coaches in the state in David Masterson. Coach Masterson is one of the longest tenured head coaches at one school as he has been the head of the football program for the last 19 seasons. Over that time period, Masterson has helped build Northeast into a great football traditional power making the playoffs in every season except two times. He has also led the Vikings to two undefeated seasons in 2003 and 2004 as well as three semifinal appearances and two quarterfinal appearances. Coach Masterson has also sent many players to the next player and beyond at Northeast including most notably Trindon Holliday (LSU/NFL). However, it has not been always easy especially playing with low numbers.

“Playing in 2A, you only have so many players,” Masterson said. “I can remember back when we played Redemptorist back in their hayday when they had Jeremy Hill (LSU/Cincinnati Bengals/New England Patriots) and La’el Collins (LSU/Dallas Cowboys). At the time, we only had 27 players. Despite that, we entered the fourth quarter of that game down only 7-0. We did end up losing that game, but it just come to show you how much our kids believe.”

For Coach Masterson, having his players believe in the culture of the program is the biggest thing in running a successful program.

“Our players expect to be there every year in the playoffs,” Masterson said. “It’s not a talent thing in which we are just so much more talented than other teams. It is just the way our kids perceive things and how they put in the work. It is all the matter of what is taking place in the program. It’s just how we do things.”

Having been at Northeast for that long of a time period and having everybody on the same page is another factor in why Northeast has been a playoff contender for so many years.

“It is hard to win consistently at a program when players hear three or four different things from a different coach every year,” Masterson said. “It is different at Northeast because the kids know what we expect of them ever since they came to Northeast. Some of these kids know it before they come to Northeast because some of their parents played under me. At Northeast, a big reason for that stability is that everybody here including the coaching staff and the administration is on the same page on what we try to accomplish.” 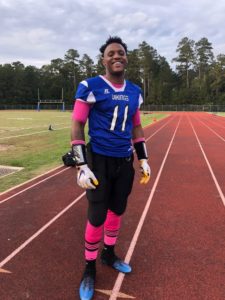 Having an ever recurring staff that is all on the same page is an underrated factor in running a strong program. Good coaching and having a strong plan is all good, but still in the end, it is the players that are the ones that go out and make the plays. Heading into the season, the Vikings had the potential of having one of the best passing offenses in South Louisiana. According to Louisiana Football Magazine’s recruiting expert Lee Brecheen, the Vikings’ senior quarterback and two wide receivers are more than capable of playing at the next level.

An offense, which includes a big sized quarterback that has a strong arm in Steel and two big, physical wide receivers with track speed in Scott and Selders, the offense was definitely going to make some plays through the air and provide nightmares for defenses. However, the biggest problem for the 2018 Vikings was not in the skill positions, but up front.

“Entering the year, our starting five offensive linemen were all new starters,” Masterson said. “In fact, four of those five have not even played football before this year.”

It was a work in progress in the beginning entering the postseason with a 4-6 record, but by the end of the season, the Vikings were playing some of their best football defeating Lake Arthur in the first round of the playoffs and only losing to St. Helena 26-14. It sure was a great finish to the season for the Vikings, but Coach Masterson knows that it could have been better.

Masterson believes that they also had a great chance of winning if they would have played Ferriday and who knows, what may have happened after. Selders and Scott both believe that 2018 was a successful season, but they both agree with their head coach.

“My overall thoughts on the season is that we had a great season, but it could have been better,” Scott said. “We could have went farther in the playoffs.”

“We put the work in over the summer and really improved as one big team,” Selders said. “I couldn’t have done it without them. I appreciate all the hard work they put in to be dedicated to the game.”

Dedication is a good word to describe both of Northeast’s star receivers. They both enjoy being around each other and getting each other better.

Scott finished off a great career especially as a pass catcher for Northeast. He finished with over 900 yards receiving and 15 touchdowns averaging over 29 yards per catch. In addition, he has also been named 1st Team All-District for three years, 1st Team All-Metro for one year, and 1st Team All-State for one year. As of right now, he has been getting interest from Texas State.

As for both Selders and Steel, both have yet to receive any offers.

“When the season is over, I like to strengthen myself and become a better athlete by practicing more,” Selders said. “I haven’t got an offer or a full scholarship these past four years of playing high school football, but I would love a coach to give me a chance.”

All three players are really talented and have the potential of playing for a while. For right now, the answer for these three players may be the JUCO route short term, but long term could be a whole different route for these seniors.

Now, Masterson and his experienced coaching staff are getting ready to help send these seniors off on the right track while continuing to preach the hardcore values of what is expected from the past 20 years at Northeast High School to the next upcoming classes.