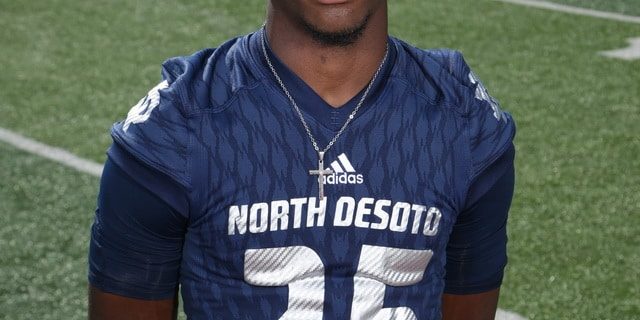 The 2019 North DeSoto senior class was not the biggest or most well known in the state of Louisiana, but they sure did have lots of talent in the class.  Two of those players are Aubrey Scott and Cooper Thomas. Scott was a running back for the team while Thomas played defensive end for the Griffins.

Scott is going on to play at Northwestern State University and Louisiana Football Magazine’s own recruiting specialist Lee Brecheen thinks the Demons are getting a great player.

Scott knew that right after his senior season was over he would need to start getting ready for college.

“I took about a two week break after the season to rest up,” Scott said.  “Then, I started my off-season training to get in good shape for college.”

Scott is ready to make new memories once he gets in college, but these seniors also had great memories from their time at North DeSoto.

“I’ll always remember the bond with teammates,” Thomas said.  “That really strengthened the team and made it feel like a family.  Being close with all the players and coaches made it a fun atmosphere that everybody wanted to be a part of.”

These memories created by the senior class will always be cherished by the players and they will remember them after they move on and get to college.

This North DeSoto senior class had a lot of talent without having lots of D-I or I-AA players.  They were all hard workers and did what they needed to do to get better day after day. 202 will be even better for North DeSoto, and they should be seen making a run into the playoffs in 2019.