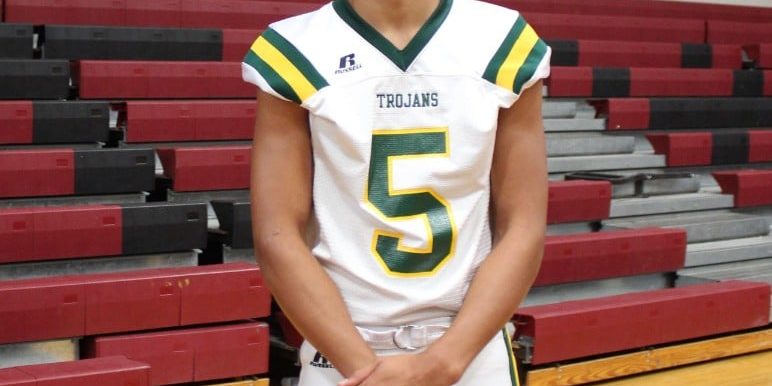 Athleticism sure does run in the family for Central Lafourche senior WR David Robinson Jr. At 6-3, 200, Robinson has shown his versatility across the gridiron. Most of the time, you would see Robinson line up at his normal wide receiving position, but since the Trojans did not match as well with the other teams in their 5A district such as Hahnville, Destrehan, East St. John, Terrebonne, and Thibodaux, Robinson had to play wherever Head Coach Keith Menard needed him to play. Whether it was playing wide receiver, running back, quarterback, returning kicks and punts, or even playing on the defensive side of the football as a safety, he did it all and was exceptional at it. In his senior season, he played all of those positions and as a result, he put up an impressive 1,800 all-purpose yards and 22 touchdowns. What has been most impressive is besides earning honors on the football field such as being named first-team on the District 7-5A team and The Courier/Daily Comet’s All-Region football teams, he has also been a star basketball player for the Trojans hoops team. Robinson gets both his football and basketball talents from his father David Robinson Sr., who played running back at Nicholls State in the early 1990’s, and his mother Dani Robinson, who played both basketball and volleyball at Nicholls State. The All-District two sport star knows that his athleticism comes from his mom and dad’s genes. As a result, he loves playing with them and living in a competitive family. The Central Lafourche star even admitted that his dad still has his athleticism even now.

“My mom would shoot a basketball and play volleyball for fun with me, but my dad just finally gave up on fighting for the top spot,” Robinson said. “He is for sure the more athletic one now because I’m 17 and he can still run with me even at 46 years old.”

“David Robinson Jr. is a 6-3 receiver that can run in the low 4.5/40 range,” Brecheen said. “He is a very talented player that has a very bright future.”

As great as a big target Robinson was in his career, he was not the only Trojan receiver that could have had a lot of success coming into the season. His teammate Kenneth Poindexter is another big target at 6-3, 200 pounds and can move at different positions just like Robinson. Heading into the season, there was a lot of potential of what kind of numbers these great athletes can put up in the Central Lafourche offense. Unfortunately, the duo was not going to pair up in 2018 as Poindexter’s season ended with a knee injury earlier this season. Robinson thus had to carry the offense on his own shoulders. After the season, Robinson reflected what it would have been like if Poindexter was healthy throughout the season.

“It was very disappointing,” Robinson said. “I grew up with him. His mom was at my baby shower pregnant for him. He is literally my brother and when he went down, it was just a complete shock. I know if he was there this season on the field with me, teams would’ve had a very hard time picking their poison.”

Even though Poindexter missed the entire 2018 season, he was still able to join the Ragin’ Cajuns of  ULL  as a preferred walk-on. Meanwhile, defenses had to focus on shutting down David Robinson Jr., which was hard to do as opposing teams had to keep an eye on him no matter where he lined up on the field. Throughout his career, Robinson may have scored a lot of touchdowns with 37 in his career, but the touchdowns have not resulted in a lot of wins as over the last three years, the team played in one playoff game back in 2015. However, it was a good high school experience for David Robinson and was really proud of the way the team has fought during the last couple of seasons including his senior season in which the team finished with a 3-7 record missing the playoffs.

“It was kinda of hard playing 10 games and winning three,” Robinson said. “The season didn’t feel bad because we lost five of those games by eight points or less, but it’s hard coming so close and watching game winners being on the opposite end.”

Robinson may be regarded as one of the best football players in program history and is referred by his coach as maybe one of the best players he has coached during his time at Central Lafourche. Needless to say, Robinson is grateful for the support throughout his career by his teammates, coaches, family, and even the Trojan fans.

I would like to thank family, friends, and specifically my mom, dad, uncle Eric, and all of the coaches who have helped me train from Bantam to high school,” Robinson said. “I also want to thank the fans because no matter how far they are, they will always support.”

After playing football, Robinson focuses on playing basketball. Most high school football players that are being recruited would shut down other sports fearing injuries, but that is not the case for the two sport star as he uses basketball as a way to help him with being a better football player.

“The explosiveness I have from playing basketball definitely gives me the advantage in jump ball plays and hand eye coordination,” Robinson said.

Robinson has received offers from Southern University and Louisiana College, but it was the nearby local college in Nicholls State that won over his attention as he signed with the Colonels on National Signing Day. It was also an opportunity to fill in the shoes of his athletic parents who both played at Nicholls State.

“I chose Nicholls State because it’s close to home,” Robinson said. “My parents played there and every time, I’ve been on campus the energy has pulled me in.”

There has been a lot of positive energy around the Nicholls State athletic community as Head Football Coach Tim Rebowe has done a fantastic job of putting the Colonels on the map in the Southland Conference. Last season, the team went 8-4 and made the FCS playoffs. Robinson is looking forward to help the team make the next step this upcoming fall.

“I’ve watched numerous games and practices,” Robinson said. “Coach Rebowe is always pushing everyone to get better so I’m excited to see the “mean” side of the coaches while they push me to get better.”

That motivation fuels Robinson as he is looking for an opportunity to prove himself to Colonels coaches, teammates, and the fans of what he can do.

“I think first I need to prove to them that I can play before I give you a better reason so for now just because I’m a local guy just 15 miles down the road,” Robinson said.

The “local guy” is just one of many local Louisiana signees in the 2018 signing class for the Nicholls State Colonels. Based on Robinson’s talents, versatility, and family name, the Colonels are getting themselves another reason to be excited about next fall.