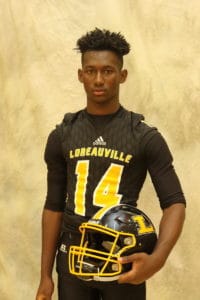 Zy Alexander: After having to miss the entire season as a junior in 2018, the athletic Loreauville High School senior quarterback Zy Alexander enjoyed one of the best comeback seasons in 2019 leading the Tigers to an impressive 8-4 season and a Class 2A Quarterfinal appearance.

This past season, the 6-3, 190 pound athlete has shown that he can make plays with his arm throwing for over 1,300 yards and 14 touchdowns. However, teams are looking at Alexander as an athlete and somebody that has the potential of playing either wide receiver or defensive back at the collegiate level.

Not only is Alexander a great athlete on the football field, but he also can play two other sports as well. In fact, Alexander has played a big part on the team’s Class 2A baseball state championship and is also a talented basketball player as well.

The three sport star has drawn the attraction of programs such as Southeastern Louisiana and Northwestern State, but it was the Lions that won the attention of Alexander as he has committed to play for Frank Scelfo and company down in Hammond.

In today’s recruit interview, we go to Catholic High School where our own Jace LeJeune got the chance to talk to Loreauvlle High School senior QB and Southeastern Louisiana commit Zy Alexander before the start of this season!