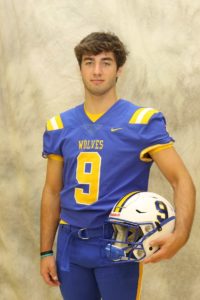 In today’s recruit interview, we go to Catholic High School where Lee Brecheen caught up with St. Paul’s High School senior outside linebacker and Richmond signee Wayne Galloway before the start of the season!

Wayne Galloway: One of the best and most versatile defenders in South Louisiana last season was St. Paul’s High School senior safety/outside linebacker Wayne Galloway. At 6-1, 220 pounds, Galloway was a guy that had the natural instincts and coverage skills to play in the secondary, but at the same time, has the frame and speed to become a great outside linebacker. Galloway has had an illustrious career playing for the Wolves as a four year starter, team captain, Freshman Year All-District Honorable Mention; Sophomore Year 2nd Team All-District selection, a 1st Team All-District/Parish selection his junior season, 2nd Team All-State his junior season, and 1st Team All-South Louisiana Pre-Season selection for Louisiana Football Magazine. For a guy that has versatile talents, instincts, and a high football I.Q., there is no wonder how Galloway was able to gather this much success in his high school career according to our own Lee Brecheen.

“Wayne Galloway is one of those kids on film that just gets it,” Brecheen said. “He reads, reacts, and just makes plays.”

That is why schools such as Richmond, Southeastern, Holy Cross, Colgate, and Cornell loved not only his play on the football field, but his work ethic off the field. The five schools mentioned all offered Galloway football scholarships, but in the end, it was the Richmond Spiders that the St. Paul’s defender picked. It was not always easy for the veteran as this past season, Galloway had to miss five games due to injury, but came back in time to help the Wolves make it all the way to the Division I Quarterfinals where the team would lose to the eventual Division I state runner up Catholic High Bears. Despite the ups and downs, there is one thing for certain and that is Wayne Galloway will be making headlines both on the field and in the classroom.