Posted by: Jace LeJeune 26 days ago 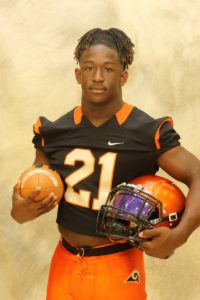 In today’s recruit interview, we go to Catholic High School where Jace LeJeune caught up with Westlake High School senior running back Jayden Ross before the start of the season!

Jayden (JJ) Ross: The Lake Charles area was surrounded by plenty of talented and underrated senior running backs. One of the names that has gone under the radar the last couple of seasons is Westlake High School senior running back Jayden Ross. At only 5-8, 190 pounds, a lot of people overlook Ross because of his size, but his play speaks more volume than his height. Despite many defenses loading the box against him, the Westlake star running back managed to rush for over 1,500 and 15 touchdowns as a junior and over 1,000 yards as a senior. Led by first year head coach John Richardson, the Rams were able to lean on their workhorse running back to win three games after winning two games the season before. Most of all, the Rams were able to stay competitive and with the help of Ross, the program has something to build on for years to come.

“Jayden Ross has great moves in the open field,” Brecheen said. “However, the best part about him is that he gets even better as the game goes along.”

If a college is looking for a difference maker in their program, then Ross may be the guy to go to.