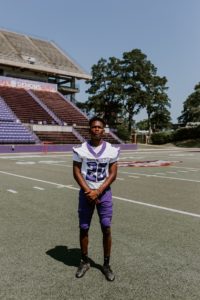 Ardarius James: With fellow teammate CamRon Jackson on the team, Haynesville High School senior OG/DE Ardarius James may not get much attention, but he was somebody that made a big impact for the Golden Tornadoes. At 6-0, 230 pounds, James has the frame to play at the DI level. Due to playing at a 1A school, James made an impact on both sides of the ball as both a tight end and defensive end his junior season. In his senior season, James changed his number from 44 to 62 in order to help his team up front on the offensive and defensive lines. Louisiana Football Magazine’s recruiting expert Lee Brecheen saw the potential of James despite the position changes before the season as he put the Haynesville senior on the front cover of the North Magazine and on the second team All-North Louisiana team.

“Ardarius James is very athletic. A lot of these Haynesville kids that play linebacker or defensive end are multi-purpose guys,” Brecheen said. “They have these hybrid guys because they have to go and play wherever the team needs them to play. They are also unselfish kids like Ardarius. He has to play on the defensive line for Haynesville, but if he was at a bigger school like West Monroe, he would probably play at linebacker. With a 6-0, 230 pound frame and pretty good speed, it is a no brainier for me that he is a DI linebacker. I think he is strong, fast, and quick, but college recruiters would want to see him play at linebacker first. Somebody will get lucky and land a prize with him.”

Despite the frame and speed, Jackson has decided to pursue a degree in kinesiology at LSU.

Roc Hawthorne: North Webster High School has always been known for its athletes, and the Knights have a good one in senior do it all player Roc Hawthorne. Like Ardarius James from Haynesville High School, Hawthorne is willing to play multiple positions for the betterment of his team. Last season, Hawthorne played on both sides of the football where he was a running back on offense and a strong safety on defense. At 6-1, 170 pounds, Hawthorne has a good frame and good speed to boot. Not only has he made plays on two sides of the football, but he has also made an impact on the third phase of the game, which is special teams. Whatever it is, he is willing to make the plays necessary if given an opportunity.