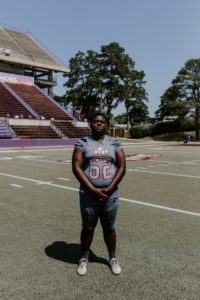 In order to do that, it was going to take more than DI talent for the Tigers to get to the state championship game. With seniors leadership from guys like WR Drake Dye and OG Joshua Glynn, the Tigers were able to take the extra step and accomplish the goals the team wanted to accomplish.

Both Dye and Glynn are unselfish unsung heroes for their team. Even though star underclassmen running backs Terrence Williams and Shamorian Wiseman combined for an incredible 4.000 yards and 55 touchdowns, it was Dye and Glynn’s blocking skills that helped make the difference in the Tigers’ highly talented running game.

Even though a lot of people may not notice both Dye and Glynn’s skills, Louisiana Football Magazine’s recruiting expert Lee Brecheen was high on both seniors at the beginning of the season placing them both on the second team All-North Louisiana team.

“Drake Dye is a big receiver in a running offense,” Brecheen said. “Again, Many is another team that doesn’t throw the football a lot, but they don’t have to because they like to ground and pound with two of the best running backs in the state this year along with a big offensive line as well as backed up by a good defense. This guy is a hidden gem because of that. When they do throw it, he is their go to guy. He has good hands and is more of a glider than a burner when he runs after the catch. This kid does time well with 4.49/40 speed, but he does need to watch his weight because he could move over to tight end one day.”

“Coach Jess Curtis and Many High School are running fools,” Brecheen said. “They are the running capital of North Louisiana and if you are recruiting an offensive lineman from that school, you would be getting a guy that is used to pulling and run blocking. Well, Joshua Glynn is one of those guys and has a chance to be a really good center in college.”

In today’s recruit video interview, Louisiana Football Magazine’s Lee Brecheen catches up with two of Many High School’s top seniors to talk about their goals before the season along with their thoughts on falling short of the state championship the previous three seasons.