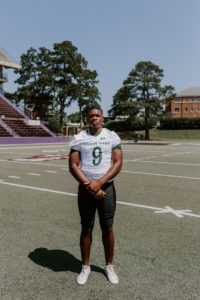 Joseph Mason: The Louisiana Tech Bulldogs are continuing to build off the momentum after the program’s dominating victory in the Independence Bowl over the Miami Hurricanes by signing an impressive 20 players in the early signing period. One of those players happens to be Green Oaks High School senior DE/OLB Joseph Mason. For whichever reason, the Giants have produced great defensive players whether it has been Tre’Davious White (LSU/Buffalo Bills) or even now with Mason. At 6-3, 220 pounds, Mason has the speed to beat some of the best offensive tackles in the game, but at the same time, has the frame to grow even bigger and play with his hand in the dirt as a defensive lineman. The Bulldogs have had pretty good success in signing pass rushers including the NCAA’s all time leading sack leader in Jaylon Ferguson (West Feliciana/Baltimore Ravens). Coach Holtz and the rest of the staff is hoping that Mason could be the next great pass rushing specialist to go through their program. Not only are the Bulldogs high on him, but other programs are as well as Mason had other scholarship offers from Southern Miss, Northwestern State, and ULM. After close to racking up 70 tackles and 14 sacks, Mason followed up with even just as good or better senior season with a lot of the attention being on him by racking up over 154 tackles and ten sacks for the Giants.

Vincent Hall: As important as it is to have a great edge rusher, it is just as important to get a great offensive lineman to help protect the quarterback and open up holes in the running game. One of the best in the state for the 2020 class is Woodlawn (Shreveport) High School senior offensive lineman Vincent Hall. Hall has not only been one of the best at his position for this season, but ever since he has been playing as a freshman. Every single season, he has been a mainstay upfront for the Knights coaching staff making All-District ever year of his high school career. At 6-4, 330 pounds, Hall has the frame, size, hands, athleticism, feet, and mentality to become an excellent offensive guard at the next level. Programs such as ULM and Southern Miss have shown interest in this senior Knight, but as of September, 2019, Hall has been committed to play for the Warhawks.