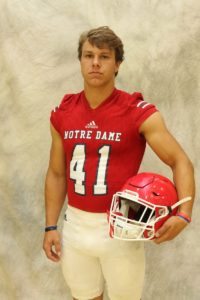 CJ Thibodeaux: Hall of Fame Coach Lewis Cook has led the Notre Dame Pioneers to four state championships. A lot of this championship program’s success has come because of great players like CJ Thibodeaux. Entering the 2020 season, Thibodeaux was highly regarded as one of the best players at his position in the state if not the best. At 6-0, 225 pounds, Thibodeaux has freakish ability as he can run a 4.55/40 and at the same time, can squat over 540 pounds and deadlift close to 700 pounds. The Notre Dame High School senior is not only versatile in the weight room, but also on the football field as well. After rushing for 855 yards and 12 touchdowns as a junior, Thibodeaux built on a strong junior campaign with an even stronger senior season rushing for 1,070 yards and 12 more touchdowns. Thibodeaux’s intangibles gained the attention of some DI programs including the Air Force Academy in which he has committed to play football. Louisiana Football Magazine’s recruiting expert Lee Brecheen loves what he sees in the Air Force commit as he has put Thibodeaux on the cover of the South Magazine and on the first team All-South Louisiana team before the start of the season. Now, with Signing Day coming along the corner, the Falcons could be getting themselves a great addition from the state of Louisiana.

In today’s recruit interview, we go to Catholic High School where Lee Brecheen caught up with Notre Dame High School senior fullback and Air Force commit CJ Thibodeaux before the start of the season!