Tioga senior QB Logan DuBois' arm proved to be a lethal one as the talented athlete threw for over 8,000 yards and almost 100 touchdowns in his high school football career. (Photo courtesy of The Town Talk)

For as long as the Tioga High School football program has been around, fans didn’t had much to celebrate especially over the last decade. Before the 2015 season, the Indians have not made the playoffs in seven years. It has all changed that season. Tioga Head Coach Kevin Cook led the team to their first playoff appearance since 2008. With that being said, the 2016 season was a great sign for things to come as Indians fans hoped that the team can build upon their breakout season. They sure did not disappoint especially with senior QB Logan DuBois leading the offense. DuBois may not be the most intimidating quarterback around at 5’9, 175, but he was a really good football player. Like other short quarterbacks like Drew Brees (New Orleans Saints QB) and Russell Wilson (Seattle Seahawks QB), he has great feet and a very good arm. He is also a really good baseball player and has made 4A All-State as both a football and a baseball player. DuBois also has the stats to prove it as well. Over his Tioga football career, he threw for more than 8,000 yards and almost 100 touchdowns. What is more important than impressive stats is wins, and the win total was exactly that for Tioga, which was even way more than expected coming into this season. The Indians, led by their talented senior quarterback, went 10-3, finished 2nd in a very tough 2-4A district, and made a 2nd round playoff appearance where they lost to 4A power Warren Easton. DuBois’ football career may be over, but his impact on the Indian football program will last for a long time. In today’s recruit article, the talented two sport Tioga senior talked about his football career, playing baseball at the next level, and so much more! 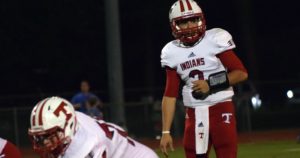 Tioga senior QB Logan DuBois was the leader of the offense and his combination of athleticism and experience was one of the main reasons for the Indians’ 10 win season. (Photo courtesy of the Town Talk)

LAFM: What are your stats and accomplishments while at Tioga?

I threw for 8,200 yards and 93 touchdowns during my career at Tioga.

LAFM: Are you going to continue your football career at the next level?

I am not going to continue playing football, but I will continue my baseball career. As of now, I am undecided.

LAFM: You helped Tioga become one of the rising high school programs in the state with the success the team has had in recent season. What are your thoughts on your football career at Tioga?

I want to be looked as one of the best quarterbacks to come through Tioga. I also want people coming into Tioga to look up to me, and I want them to have the same success as I did.

My biggest strength was my arm strength as well as being able to move around in the pocket.

LAFM: What are some of your weaknesses as a quarterback?

I tried to get better at being more athletic on the perimeter and not being just a straight pocket passer.

LAFM: Is there a college or NFL quarterback that you modeled your game after? If so, who and why?

I modeled my game after Drew Brees because of his size. I was not a big quarterback so I studied on how he was able to move around and find open receivers.

LAFM: Last season, a lot of good things were expected out of the team after making the playoffs. The team did just that and more with winning 10 games last season. What are your thoughts on the season that the team had?

This past year was one of, if not the best, season because of the players and coaches that we had. This group of players has been together since we were six years old so we are all very close.

LAFM: What is your advice for next year’s Tioga team?

Take the off season serious, work hard, and get ready for next season. 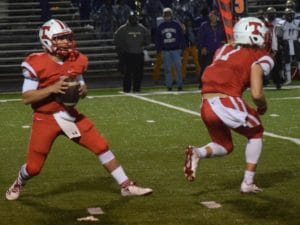 Tioga senior QB Logan DuBois drops back to pass as he looks for an open receiver. (Photo courtesy of the Town Talk)

I like to spend time with my family and enjoy the outdoors hunting and fishing.

LAFM: What are you going to miss most about Louisiana high school football?

I am going to miss the excitement on the field and being under the Friday night lights.

I want to first thank God for giving me the athletic ability to be able to play such a great sport, and then I would like to thank my family for supporting me and being there for me at every game.

LAFM: You were one of the state passing leaders last season, but you couldn’t do it by yourself. Are there any teammates that you want to thank for helping you achieve your individual goals?

LAFM: What made you unique from any other quarterback when you were playing?

What made me unique was that I loved to win in anything that I did. No matter what I did I always wanted to win. I hated losing.