Plaquemine offensive lineman Abraham Delfin is one of the best offensive linemen in the state of Louisiana. Delfin is on our 2nd team All-Louisiana Team which proves that he is one of the best at what he does. If you have seen Abraham Delfin and talked to him in person, you would think that he is a normal guy that has played football his entire life and that his family has been around the game of football, well you would be surprised what Delfin’s story is all about. Delfin’s parents orginally came from Mexico. They were never born in the United States or in Louisiana for that matter. His parents originally moved to Texas where they had two daughters. After their daughters were born, the Delfins moved to Baton Rouge where Abraham Delfin was born. Delfin’s family includes his mom, dad, and his two sisters. His two sisters and his father know the English language but his mother did not. Of course, he had help from his family on learning the English language but Delfin had another technique helping him learn the English language even quicker. 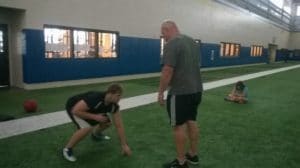 One of the best centers in the State Abraham Delfin gets in his stance as he is working on offensive lineman drills. (Photo provided by Abraham Delfin)

He also taught his Mom how to speak English along with the rest of the family. Now, she is keeping up with the language and is learning a lot from it. According to Delfin, there was one big reason why he had to learn English.

“There is not a lot of people who speak Spanish down here so you kind of have to pick it up,” Delfin said.

Once he learned the language, Delfin was trying to fit in with all the other kids around and what better way to do that than playing football.

“I played  little league football,” Delfin said. ” I played it because I was always the biggest kid and a lot of people came up to me and said that I needed to play football.

“I grew up learning both languages but I never grew up around football,” Delfin said. “It was something that I wanted to try and out and I decided to stick with it.”

That decision turned out to be a good one for him as he then attended Plaquemine High School. Plaquemine Offensive Line Coach Bryan Troxclair was in his first year at the school when Delfin first started playing football for the Green Devils.

“Abe was a guy that stood out when I first came here to Plaquemine and when he was a freshman,” Troxclair said. “He was always working out at the gym and working hard.  I was really impressed with him.”

Two years ago, the Green Devils had a special football team as the team had playmakers all over the field and were very experienced. This was a team that made it all the way to the semi-finals before falling short to Warren Easton. On the offensive line, Abraham was learning the game very quickly and became a starting offensive guard for the team that had D-I quality offensive linemen like Jodeci Harris (Southern) and Kevin Dotson (ULL). Those two players really helped Delfin become the player that he is today.

“They were both great communicators at the line as well as some good leaders for the team,” Delfin said. “They were helping me out with everything that I needed like if I forgot a play. They would just remind me what I have to do and helping me making the transition to a starter much easier.”

As a junior, Delfin made another transition from guard to center and has adjusted really well. Now, in his third year as the starter, Abraham Delfin has become the guy on the offensive line and the coach on the field. Coach Troxclair is really impressed by how fast that he picked up the game of football.

In order to be a top rated center, you got to have the smarts to play the position. A center is the quarterback of the offensive line and needs to be the communicator for the rest of the offensive line. The team is really comfortable with Delfin in that role. According to Troxclair, the quality that stands out even more than his smarts is his work ethic and for good reason.

“Abraham Delfin does not miss any workout or practice for us while also balancing school and a job at the same time,” Troxclair said,

The job that Coach Troxclair is talking about is Delfin’s construction job that he works for. Balancing school, football, and a job is not an easy thing to do even for a guy like Abraham Delfin who makes it look easy a lot of times.

“You just got to know how to stick through it,” Delfin said. “You have to go through it day by day and definitely knowing that the hard work will pay off.”

After everything that Abraham Delfin has gone through in his life, all the hard work and dedication, learning the languages and the game of football, working extra jobs, and maintaining school and his family, Delfin wouldn’t change the experience that he has had and is now looking forward to what his future is.

“I want to go to college and of course, play football, but I want to get my degree,” Delfin said.

Abraham Delfin has some advice to anybody that is going through some tough times trying to adjust to something new.

“My advice is to stick through it,” Delfin said. “It is not going to be easy but in the end, it will be worth it.”

It has definitely been worth it for the veteran offensive lineman for the Plaquemine High School and it is only going to continue getting better.

Hey football fans. Like our recruiting interviews and human interest stories? Click on our website daily to view articles on recruits, coaches, and so much more at our website: https://www.lafootballmagazine.com/ . Also, our 20th anniversary edition of Louisiana Football Magazine is coming out. It has previews for every college and high school team from LSU to all the 1-A schools. Also, Lee gives out his All-Louisiana team and breaks down position by position on every high school player in the state. So, why  wait and pre order the magazine now at https://www.lafootballmagazine.com/product/la-football-magazine-2016-annual-preview/