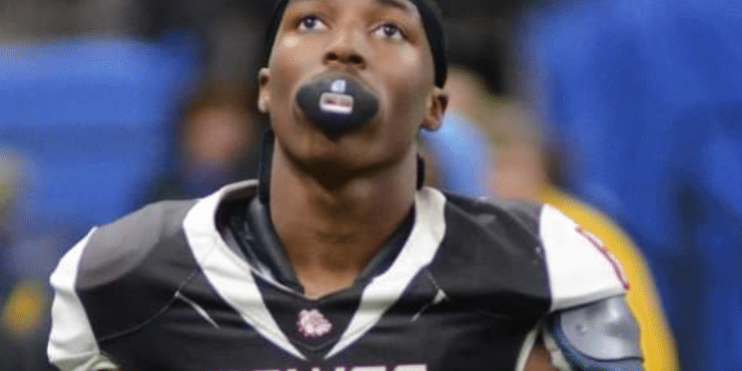 Every time the White Castle Bulldogs have a great athlete at quarterback, it usually works in the team’s favor. Two of the program’s best all time teams were led by dynamic playmakers at the quarterback position. First, there was the 2010 White Castle team that went on to win the Class 1A state championship led by future LSU and NFL safety Ronald Martin under center. Then, there was last season’s White Castle team led by one of the most fun players to watch both throwing and running in Javier Batiste. In 2019, Batiste led the Bulldogs to a Class 1A state championship runner up finish by accounting for over 2,609 yards and 27 touchdowns. Now, after graduating and enrolling in Coffeyville Community College, the quarterback reigns are now handed to Tahj Favorite, who has played numerous positions for the team including at quarterback before the emergence of Batiste at the position last year. Playing with Batiste on offense and playing against him in practice on defense has given him even more insight when he returns back as the starting quarterback for the 2020 season.

“Some things I’ve taken from him to improve my game is to be calm and settled through any situation that happens on the field,” Favorite said. “It’s best for the quarterback to keep his composure during a game. He was also a good leader to the team. He pushed every one of us to be great, and that’s what I tend to do by following his footsteps. He always told me to be better than him and learn from his mistakes. I’m going to stand by that and carry White Castle to a state championship.”

At 6-1, 171 pounds, Favorite may not be the biggest guy around, but he makes up for it with his quick decision making, strong arm, and long stride as a runner. Although not as explosive as a runner as Batiste, he still can beat you with his legs and also may be the better passer of the two.

“I have a strong arm to get the ball to my wide receivers,” Favorite said. “I can also run and move out of the pocket to extend and make the a play as well as also gain a couple yards with my feet. I’m discipline and know how to handle situations under pressure.”

Those are all great qualities to have and being a part of a state championship caliber team last season has helped him deal with those difficult in-game situations.

“Well, everybody came in during summer training with this different mentality, which is straight hunger,” Favorite said. “We stayed discipline throughout the whole season. It was us and nobody else. We just wanted it more than everybody else. I just think if we all lock in, stay focused, and be physically as well as mentally ready in every situation, we could do it. We have the talent, we just need to reach our full potential to make that happen.”

Seeing the other talent around him, Favorite is stepping up as a leader during the offseason in order to maximize the team’s potential even more after losing to Oak Grove High School 55-12 in the Class 1A State Championship. Just like when the Tigers lost in the Class 1A State Championship to Kentwood High School the season prior, Favorite is hoping his team takes a page out of Oak Grove’s book.

“I need the improve on being the voice of my team and being a leader,” Favorite said. “I’m not that good at talking in front of people, but when it comes down to business, I would do whatever it takes to get the job done. I also have to stay positive and keep my head up because everyone is relying on me. If I stay positive, they will stay positive. We just got to stay locked in.”

“Well, I know playing safety pays attention to the quarterback, and I also know playing defense how the coverages are set up,” Favorite said. “Playing on defensive side of the football helps me on the offensive side because I can read the coverages easier and also look off the safeties. I also know where the holes will be at for me to complete the pass so it all works out on both sides.”

The confident White Castle athlete has recently received some college interests as he currently has received two offers from Louisiana College and Carthage University. Other programs such as UL, Houston, Kansas, Louisiana Tech, Delta State, and Millsaps have all inquired about him as well. Off the field, Favorite is just as much of a leader as he is on the field being active in his community.

“I am in a community organization for my town called the “Mayor’s Youth Council,” Favorite said. “It is an organization I attend. We do stuff around the community to give back as well as help and teach the youth. We also travel, learn about new things and meet new people.”

“Coach Meyer came in, and gave everyone a chance to be bigger than what they thought,” Favorite said. “He taught us to be family and stick by that. We couldn’t rely on nobody else, but each other! He was like a second father to us outside of home. He was there anytime someone was in need. It hurt us to see him leave, but I know it’s all love. I still talk to him. I can say their coaching skills are rarely different. They have the same exact mindset in their hunger to win and competing for a state title. I can say the difference between them is that Coach Brown will rely heavily on our wing person this year for extra blocking. We didn’t really do that last year. Coach Brown came in with a new offense, and we’re getting the hang of it so far. Once we master it, I believe we won’t be stopped.”

“My biggest goal is to lead my team to the state championship and win,” Favorite said. “Another goal of mine is to commit to my dream school, which is ULL. I intend to get 1,000 passing yards and 1,000 rushing yards or more. I want to have over 10 touchdowns this season also.”

There are not many quarterbacks in the state as driven and confident in his abilities than this White Castle senior athlete.

“I have a winning mindset,” Favorite said. “My coaches, teammates, and good support system have molded me into the best person I can be. I also tend just get better and what I’m doing. I’m willing to do whatever at any cost to help my team. I’m an athlete, I’m focused, teachable, and I’m a winner!”

For Tahj Favorite, he does not have to be Ronald Martin or Javier Batiste to be successful, but he is well aware of that and is just being the best Tahj Favorite he can be. For the White Castle football team, that is their most “favorite” thing about him.

Click the link below to check out Tahj Favorite’s junior highlights: