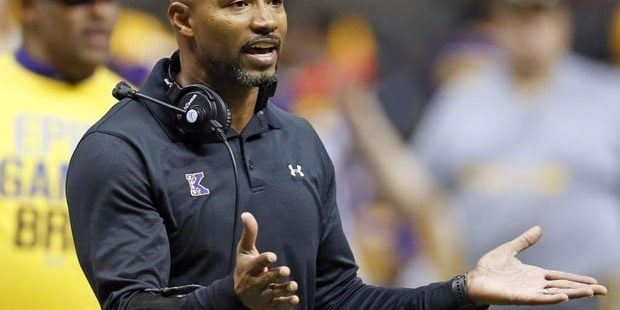 New St. Augustine Head Coach Nathaniel Jones was announced as the program’s new head coach in February after the retirement of his predecessor Al Jones, who coached the Purple Knights over the last three seasons. Nathaniel Jones was one of many applicants to apply for the prestigious job and at the end of the process, was the right fit for the football program. Spending the past two seasons as the St. Augustine assistant coach really gave Jones an advantage as he already has built a comradery with the rest of the team. With his coaching experience and success, Jones brings a lot to the table and now he is ready to take over the New Orleans powerhouse program.

“The biggest thing that we set for is a championship culture,” Jones said. “We have building on that for the last two years and we just want to continue to go forward with that.”

Building championship programs in New Orleans has been a familiar experience for Nathaniel Jones. In 2013, he led his alma matter Edna Karr High School to the Class 4A state championship game in 2013 helping to continue the legacy that Jabbar Juluke left when he led the Cougars to a state championship in 2012 and three straight trips to the Superdome. His term may have only been two years, but for what he accomplished having a combined record of 20-6 helped set the tone for current head coach Brice Brown to continue to lead a dominant program for what it is today. As a former player from Edna Karr, Jones was proud of what he accomplished in his two years at the school that he cares for and what the team is doing now under Brown’s leadership.

“Those guys have had a program established since their players were in junior high,” Jones said. “I was fortunate enough to play for them as a junior high player and the thing they emphasized was just continuing to work and develop. ”

As a junior high player, Jones actually had a chance to play for different high schools when the Cougar football program was just starting to develop, but the current St. Augustine coach knew that Edna Karr  was the place he was going to be.

“When I came up, the program was still developing and I was presented opportunities to either stay or go elsewhere,” Jones said. “I was one of the young men that decided to stay. The foundation of the program was grounded when guys who could have gone elsewhere like Edward Dillon, who played corner back as well as coached at Nicholls State, and Patrick Surtain Sr. (Southern Miss/Miami Dolphins/Kansas City Chiefs) decided to stay at the program and help the build the program that you currently see now.  ”

That decision to stay at Edna Karr would later influence Jones to consider a career in coaching after being taught by two of the best coaches in program history.

“I was fortunate to play basketball for Bill Robinson and football for Don Wattigny,” he said. “I won a couple of state championships playing for those guys. Some of my other coaches like my junior high head coach Al Ott and Spencer Ross (former Edna Karr assistant coach) also played a big role for me in order to get in the coaching profession.”

After a great playing career at Edna Karr and ULM as a linebacker/defensive back, Nathaniel Jones has coached at a lot of places, but being the head coach at your alma matter in which he eventually became had a sort of a different feeling compared to the other places he has coached.

“You always want to do a good job wherever you go,” Jones said. “That is what I wanted to do there and I believe we did that. It was a good situation there and looking forward to doing it at St. Augustine.”

Along with the experience of playing and coaching on state championship teams, Jones has coached at a bunch of places including at the high school level such as Joseph S. Clark, John H. Reagan High School in Houston, Texas, Edna Karr, St. Augustine, and others, but he also coached at the college level as well. Jones served as an assistant coach at places such as the University of Texas San Antonio (UTSA), Midwestern State University, and Northwestern State. Before he arrived at St. Augustine two years ago, he served as the assistant coach and defensive coordinator at the University of St. Francis in Illinois. Constantly transitioning from coaching at the high school level to the college level gave the longtime coach a new look at the type of kids he is actually coaching.

“I think the biggest difference from coaching high school football to coaching college football is the stage they are at in their lives,” Jones said. “The guys in college are already married or finding future wives and have lives at home. They are actually living and working in the real world so to speak and go through that last step of them becoming a man. It is a little bit more of a mature conversation and when you are dealing with the high school guys, you are trying to build up their character and trying to instill in them that aspect.”

Coaching at different places gave Jones a chance to coach many talented players.

“Obviously some of the recent guys I coached at Edna Karr like Donnie Alexander (LSU), Racey McMath (LSU), Aldon Clark (Arkansas State) are some of the best players that have played for me, but there is also an older name that people may not remember in Chad Johnson,” Jones said. “He played high school at Evangel Christian Academy and played for me at Northwestern State. He was one of the best players that I have ever coached. ”

There is one thing that all those players have in common and that is they have all played their prep football in Louisiana. Coaching at various places has given him a perspective on how much talent there is in the state especially in New Orleans.

“Southern states like Louisiana, Mississippi, and Texas all have talent, but when you talk about New Orleans in general, there are a bunch of kids that are highly skilled and have a lot of room to grow in order to send their talents to the college level and beyond,” Jones said.

Nathaniel Jones especially has the opportunity to add a few more names of great players to the list at St. Augustine as the school has produced the most NFL players out of all the other Louisiana high schools. Current and former NFL stars like Leonard Fournette (LSU/Jacksonville Jaguars), Tyrann Mathieu (LSU/Arizona Cardinals/Houston Texans), Chad Jones (LSU/New York Giants), and plenty of others had made their marks wearing the purple and gold during their high school days, but playing in the NFL has not prevented them from continuing to go back and serve the community where they came from.

Both Nathaniel Jones and the St. Augustine football program have high expectations to win and compete right away, but also wants its player to benefit from what they learn on the football field to learn in their everyday life just like the great players to come before them.

“I think we have a lot of potential as a program and as a force in our city not just in football,” Jones said.

Building off a season in which the Knights went 7-3, Jones believes that there are plenty of guys to keep an eye out once the 2018 season starts.

“Defensive end Taiwan Berryhill is going to make an impact on defense and on offense, wide receiver Broderick Martin is our guy,” Jones said. “Martin is a highly skilled guy that is very explosive and we got a few couple of offensive linemen as well as a really good tailback in Mahmood Bailey, who can do a couple of different things for us. We are looking to spread it around to other wide receiver like Shamaul McKnight and De’Andre Cooper in order to make things happen. On defense, our mentality is to play smart and be violent to the football when you get there.”

Obviously, the number one goal for any program is to win a state championship. However, it is much easier said than done. It is a process and a process that Nathaniel Jones is trying to build.

“It is the culture,” Jones said. “At the end of the day, we want to build a culture of winning championships and doing it the right way. The biggest thing for this year is to set the tone for a championship culture. We just want to continue to go forward with that.”