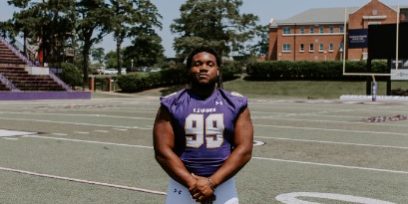 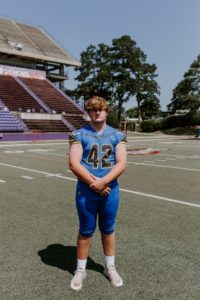 For our first recruit video interview of the year, Brecheen got the chance to talk to two of the best players in North Louisiana in Alexandria High School senior DT Jacobian Guillory and Tallulah Academy senior TE/DE Ty Schaufele.

Guillory is one of the top prospects not only in the state, but in the entire country. As a four star prospect at 6-2, 338 pounds, Guillory has the size, athleticism, and power to become one of the nation’s best defensive linemen. Earlier in April, Guillory announced his top five schools, which were LSU, Texas, Texas A&M, Georgia, and Alabama in no particular order. Brecheen talked with the big time defensive tackle about when he is going to make his decision, his thoughts on LSU Head Coach Ed Orgeron, and plenty more below. At 6-4, 238 pounds, Schaufele may not be getting the same attention as the Alexandria High School product, but he has also shown that he can really play. Schaufele plays all over the field as he plays tight end, defensive end, and even punter. Even though he may not play in the LHSAA, it comes to show you that Tallulah Academy and other MAIS schools can produce some great players in their own right. Brecheen asked Schaufele about what it is like to play in the MAIS league among other things. To check out the interview, click the link below!

Besides the first interview, we also have a bonus video for y’all to watch. LeJeune caught up with Guillory earlier to talk about the recent LSU camp, his top five schools, the upcoming season, what he does when he is not playing football, and so much more! To check out that interview, please click the link below!