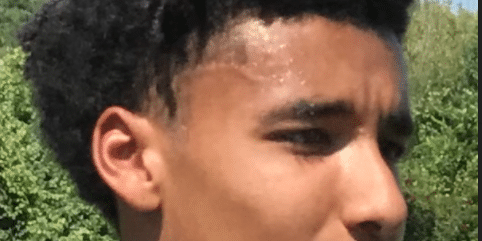 Moving from Italy to the United States, Lincoln Prep High School athlete Jeyvian Tatum never thought he would be able to pick up a football much less play the game.

Eight years ago, Tatum and his family moved from Italy and Germany where they both lived at one point to Grambling because that is where his father’s family lives.

“My mother met my father over there in service,” Tatum said. “His family is from here in Grambling. He wanted to get closer to his family so we moved here to Grambling. In the summertime, we go back to Italy and Germany. We also lived in Limbach and then we come back here”

The move from Europe to the United States was a big transition in itself for him and his family.

“My birth father is American, but I never really spoke English,” Tatum said. “When I moved to Grambling, I had to learn English. I am still having problems with the adverbs, pronouns, etc.”

“Each sport leads to an advantage for me to play football,” Tatum said. “My quickness as a centerfielder and a shortstop helps me as a defensive back. Being an athlete makes everything simpler.”

Ever since starting to learn the game of football as a middle schooler, Tatum first played at Ruston High School before being able to showcase all of his abilities when transferring to Lincoln Prep. Since Lincoln Prep is a Class 1A football program, the team does not field as many players as other teams. Because of that, Tatum was able to play multiple positions for the Panthers. Although the Panthers won only one game, the bright spot of the season was Tatum, who over the last two seasons, has played quarterback, receiver, defensive back, and even kicker.

“Being a senior, I did play quarterback, but moved to my more natural position at wide receiver,” Tatum said. “It was so much fun playing receiver this season. I dropped probably about two passes all season. I played receiver, defensive back, kicker, punt returner, and kick returner this past season.”

When asked about what position he wants to play at the next level, he immediately thought back to his roots.

“Wide receiver and kicker are the two positions that I want to play at the next level,” Tatum said. “My coaches are trying to get me a kicking scholarship. Growing up in Italy, all my life, I have been playing soccer. American sports like baseball and football, I caught on so quick and then the first time I stepped on the field, they put me at kicker and I made a 47 yard field goal.”

Although Tatum has been named an All-District as a kicker over his career, Louisiana Football Magazine’s recruiting guru Lee Brecheen believes that Tatum’s future is at a skill position.

“I had a chance to see Jeyvian Tatum play one of his games against Plain Dealing,” Brecheen said. “Jeyvian is a super big time player for a small school in Lincoln Prep. He is so gifted and if he played for a John Curtis or a West Monroe or a Neville, etc., he would be getting a lot of DI offers. He is 6-2,175 pounds, but he can run and is tough. I think he is a legitimate cornerback or safety in college. He also plays receiver too for Lincoln Prep, but he is a big time player.”

Although Tatum has the ability to play at the college level, he has gotten more collegiate attention for baseball and track, he has not received offers for football. Tatum was invited to some camps during the offseason, but COVID has negatively affected the recruiting process for him.

“It definitely messed up a lot because during summer workouts, I actually got COVID so that knocked off two weeks there in which I could have gotten bigger and stronger,” Tatum said. “Also, a lot of games were cancelled so if we played more games, more schools would be looking at me. It just has shortened the whole process up.”

Now, planning to play in a Monroe All-Star game, Tatum is looking to have another chance to show colleges what he can do as he has done so throughout his athletic career.

“The first reason why colleges should offer me is grades,” Tatum said. “I have a 21 on the ACT as of right now. I also listen and I am disciplined. Whatever position they need me to play I will play.”

It is evident that this world wide journeyman has proven that he could do it all no matter the location.

Click the link below to check out Jeyvian Tatum’s senior highlights against Plain Dealing: