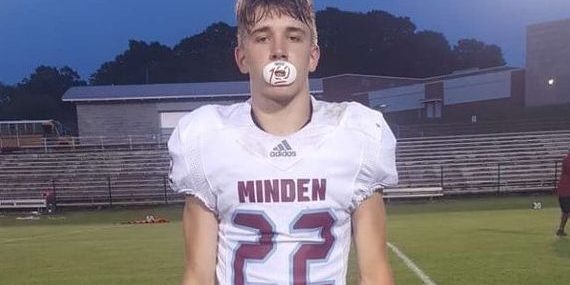 In a year full of great safety prospects around the state of Louisiana including LSU commits Sage Ryan (Lafayette Christian Academy) and Matthew Langlois (Catholic Pointe Coupee) along with Alabama commit Kaine Williams (John Ehret) and plenty of others. One of those safety prospects that is flying under the radar is Minden High School senior safety Austin King. According to Louisiana Football Magazine’s recruiting specialist Lee Brecheen, King certainly deserves to be mentioned as one of the best safeties in the state of Louisiana based on what he has seen from the Minden prospect. Seeing King play reminds him of another situation in which another former Minden Crimson Tide prep star went under the radar and is now making a name for himself in the NFL.

“I had a chance to see Austin play as a junior,” Brecheen said. “He was 6-1 and a soaking wet 160 pounds. Then, he had the it factor, and now, he is 6-1, 175 pounds. When he was skinny and lean, he was an incredible player. Now, filled out, he is one of the top safeties in the state. Right now, he is relatively unknown, but if this kid gets a DI opportunity, he will be All-Conference in three years. He blitzes like Grant Delpit (LSU/Cleveland Browns), and I have also seen him return a 90 yard kickoff return. He has 4.4/40 speed and hits like a tank. He reminds me of Craig Steltz (Archbishop Rummel/LSU/Chicago Bears) because they share a similar playing style. I talked to Spencer Heard and he agrees that this guy is special. This reminds me of when I was high on L’Jarius Sneed when he was not highly ranked either coming out of Minden. He then went on to star at Louisiana Tech and is now one of the best young players on the Kansas City Chiefs.”

In terms of players that King likes to model his game after, it truly shows how physical of a player King can be.

“Well there’s a few,” King said. “I love watching Kam Chancellor (Virginia Tech/Seattle Seahawks) because he is a great safety and is very physical and aggressive. I also love watching Ray Lewis (Miami/Baltimore Ravens) because of the determination he had and the never give up attitude he had. He is always positive and ready to play and make his team better.”

King has certainly made his team better as indicated by the team’s 5-2 record.

“Well I am very proud of my teammates,” King said. “They have put in the hard work to get to this 5-2 record. You know overall we have a great coaching staff, and I can’t thank them enough for giving me the chance to play for them. It’s a real honor to play for these coaches. I can’t thank my teammates enough for pushing me making me better and putting in the hard work as well as striving to be an amazing football team to remember.”

It has also been a season to remember for King, who is not only having his best season as a safety, but is also scoring touchdowns on special teams as well.

“Yes, it’s an amazing feeling to return a long return for a touchdown, and for it to make that big of an impact on the game makes it that much better,” King said. “My teammates made lots great block for me to return it like I did.”

When it comes down to it, King will also treasure the feeling of making a big time hit.

“No doubt,” King said. “I love the bone crushing hits!! I love the feeling of straight crushing someone and being very aggressive and physical.”

In order to be a big time hitter, King makes sure to get to the right place at the right time, and he does that by reading the quarterback’s eyes.

“I can read whether the quarterback is going to hand it off or pass it, coming down, or hitting the short passes as well as the run game as quick as possible,” King said. “I am also really good in playing against the run.”

Ultimately, the Minden High School rising safety recruit just wants to get his name noticed so he will have a chance to get a scholarship in order to play at the next level. Although he has yet to receive any offers at this point, there has also been son increased interest as well.

For King, there are a lot of factors to consider when choosing a place to enroll and play college football at.

The Minden High School athlete realizes that the best way for colleges to take notice in him is to simply give it all on the football field.

“Well, I go 110% and give it my all until I hear the whistle,” King said. “I believe that I am more intense than most people I don’t give up and I have a great work ethic. I am also determined to make every play and make my game perfect in order to be the best at whatever I do.”

Being the best is what motivates King and having an opportunity is all he can ask for.

“Well, I would like to tell these college coaches that I know there are plenty of athletes just like me, but I guarantee I want it more then them,” King said. “I will work harder than them, and I believe I have more determination and a better work ethic. I can play any position on the field, and you will not regret picking me.”

With no fear on the football field, underrated athleticism, determination, and a high football I.Q., there is certainly a place for Minden High School’s Austin King to solidify his spot on a college campus next fall.

Click the link to check out Austin King’s senior highlights: