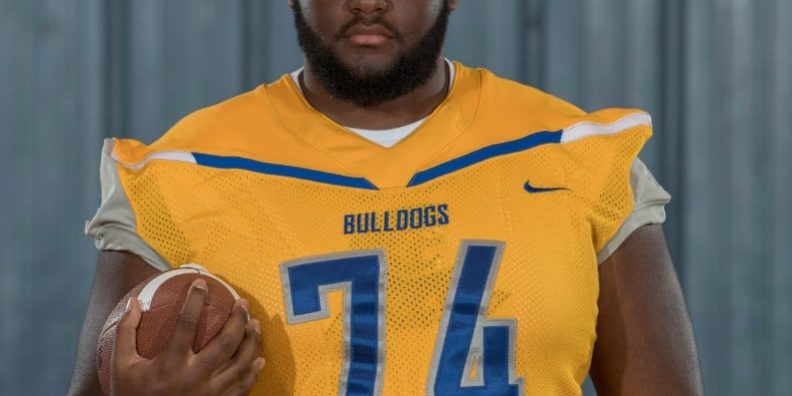 “I was really good at both, but I got recruited mostly for the offensive line,” Ellis said.

Throughout high school, Ellis played for his high school basketball team his freshman and sophomore years. Basketball was a solid way for Ellis to stay actively involved in the spring and maintain his conditioning. Though he does not play competitively anymore, he still enjoys playing at the recreational center in his spare time.

“After playing those two years, I tore my meniscus during my junior year and I stopped playing basketball,” Ellis said. “When I did play, I was pretty good. There was a player that played in my position around 6-foot-9, so I did not play much.”

Ellis decided to commit to football over any other sports once realizing how much attention he was getting from college for football. After playing only one season of high school football, Ellis received notoriety from colleges and was even offered a scholarship.

“My very first offer was during my freshman year and I kept getting offers,” Ellis said. “I enjoyed playing basketball, but I stopped growing early in terms of height and that was a factor. Coming out of junior high, I was about 6-foot-3 and basketball players are typically 6-foot 5 and up. I wasn’t fortunate to be that long, and I knew football was going to be my sport then.”

Ellis was a player that enjoyed every game he played in with his teammates, but even he had to admit there was something extra special about playing in rival games. He relished those games and understood they were a bit more meaningful than any others.

“Playing Wossman High School and Richwood High School were big rivalry games for us,” Ellis said. “Whenever we played those guys, the whole city would shut down and everybody would go to those games”

With all of the attention Ellis received for his talents on the field, he naturally became a leader his teammates would look up to. According to Ellis, he was one of the leaders on his team well before his senior year. Also, he did not think being a leader was hard as he believes he has natural leadership qualities.

“I always thought I had good leadership skills even before I was a leader,” Ellis said. “There was a really good group of guys I played with during my freshman and sophomore years that prepared me to be a leader my junior and senior year.”

Ellis insists being a leader that led by example was his most effective way of leading his peers.

“I definitely was not a vocal leader. I led by always working hard and doing what I was supposed to do,” Ellis said. “I wanted to be the player that did not say a lot, but willing to do whatever it takes to get the job done.”

Not only does Ellis’ leadership set him apart from other senior offensive linemen throughout the state, but his size and ability only adds to it. Louisiana Football Magazine’s recruiting expert Lee Brecheen has high regards for the two star offensive guard according to 247 Sports as he put Ellis on the front cover of this year’s North magazine edition.

“Isaac Ellis had some of the best feet I saw in 2017 for any offensive lineman weighing 300 pounds or more,” Brecheen said. “He has big time ability.”

Ellis plans to maintain this attitude as he moves on to the college level where he will play at the University of Memphis as an offensive guard. Ellis is a player that has always been attracted to colleges that are a little smaller and more intimate than schools such as Alabama, LSU, and most of other Power 5 conference schools.

“Memphis has a great football team, great coaches, and just a great environment to play in,” Ellis said. “I also like that it is not too far from home.

As a freshman, Ellis says his heart and how great of a teammate he is will be his biggest contribution to the team. He values being a quality person and someone that could give insight to any of his teammates who are in need. With summer approaching, the fall will be coming around the corner quickly and Ellis intends to be prepared for what his new journey has in store for him.