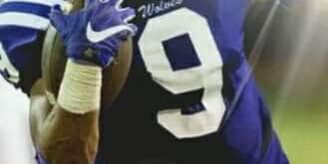 If it was not for Anthony “Pooka” Williams’ (Kansas signee) effort in the Hahnville Tigers‘ playoff run, a lot of people would be talking about what Rayne senior RB/DB Trent Winbush accomplished in the 4A playoffs leading the team to semi-finals. The Rayne star two way player was the second leading rusher in the state behind “Pooka” as he ran for 2.536 yards and 32 touchdowns. A lot of those yards and touchdowns came in big playoff games against Helen Cox, Leesville, and Cecilia. Even though Winbush was not able to carry the team for one more game against Lakeshore, he still appreciated how hard the rest of his teammates played.

“My thoughts on the season is we had a great season,” Winbush said. “We came up short of our goal, but we had a point to prove all season, and we played with a chip on our shoulders. It took us a long way, and we proved a lot of people wrong. Proud of our season.”

What is even more incredible was that Winbush really helped carry a Class 4A team that may have not had as much depth as some of the other teams they played and still was able to post multiple 200 yard and three plus touchdown games on a consistent level. When Winbush finished his last snap as a Wolf, he took home many recognitions and achievements including being named 1st Team All State, 1st Team District on Offense, Offensive MVP in District, All-Acadiana First Team, All-Acadiana Offensive MVP as well as winning the 2017 Kevin Faulk (LSU/New England Patriots) Outstanding RB Award, numerous Player Of The Week Awards, and becoming an I-10 All-Star. However, it was breaking the school’s all time leading rushing record that was set by former LSU All-American Josh Reed meant the most for the star play maker. Even with his name in the record books, Winbush believes the rest of the team was just as responsible for his achievements as much as himself.

“The award that means most to me is beating the high school rushing record,” Winbush said. “It also means a lot to me because it was a team effort, and my teammates helping me achieve this goal so it makes it even more special.”

Winbush was a part of a very underrated one two punch at running back along with Darien Harmon. Both players had plenty of games in which they both were able to run for over 200 yards and multiple touchdowns each. Like other great running back duos, Harmon and Winbush had a very strong relationship on and off the field.

“Yes, we were given the nickname Thunder and Lightning,” Winbush said. “I’m known as the thunder, and he was known as the lightning. We are family.  We have a great relationship both on and off the field.

Despite being the state’s second leading rusher this past season and breaking the school all-time rushing record, Winbush actually sees himself as a defensive player more than an offensive player.

“I rather play defense,” Winbush said. “I’m a very versatile player, and I can be as aggressive as I want to be on defense. I can play strong safety, free safety, buck safety, and I can play cornerback.

Even though a lot of the high school fans have taken notice of his crazy statistics on the offensive side of the football, it was the colleges that saw the All-State play maker’s potential on the other side of the football. Schools like ULL, Nicholls State, Arkansas Tech, Northwestern State, and McNeese State all showed interests, but it was McNeese State Coach Lance Guidry’s commitment to Winbush that set the Cowboys apart. As a result, Winbush signed with McNeese State on National Signing Day.

“I realized McNeese was the right fit when the head coach Lance Guidry and three other coaches came visit me and really wanted me to succeed as a football player and as a student, but as a student more,” he said. “They really showed they wanted me bad more than anyone else did.”

“In my opinion, Trent Winbush, who is 6-0, 180, was the biggest steal from Louisiana and is every bit of a big time DI player,” Brecheen said. ” Winbush has a chance to be special. I saw him in person his senior year. He has great instincts as a strong safety and is an incredible, determined player with the hips, toughness, along with the speed as a running back. The only thing I can think of was a reason why Winbush does not get talked about as much as the other star players around the state was that not a lot of colleges saw this kid play in person. Otherwise, you would know he is special by now. The Cowboys signed an immediate impact player with football skills and toughness. The only question is where do you play him. Do you play him at running back or at strong safety? Either way, he can be an All-Conference player. I also think that he is good enough to play at LSU.”

Even with all the God given athletic talent that Trent Winbush has, it is not stopping him from continuing to work on his craft.

“I need to improve in all areas of the game,” Winbush said. “I’m always striving to be better.”

With all the hard work, it would be for not if it was not for the people that got him there.

“I want to thank my dad Therion Winbush, my mom Tamara Winbush, my two brothers Darius and Darnell, my sister Mariah, my uncles Chris Winbush, Malcomn Dupuis, and my uncle Nelson Bias,” Winbush said. “I also have to thank my grandmothers Tina Theriot and Willa Boutte.

Winbush does not only work on his craft on the field, but when he gets time off, he watches film on some of the greatest safeties to ever play including his football idol the late, great Sean Taylor (Miami/Washington Redskins).

All the qualities that were described about Taylor really fit Winbush’s game. He is an impact player that really knows the game and is striving to be the best he can be like when Taylor was playing. In order to be compared to a star player in his prime like Sean Taylor, Winbush must have the ability to take over a game.

“The fans should be excited because they are getting a game changer,” he said.

Whether is is playing running back or defensive back, Trent Winbush is the definition of a true game changer.