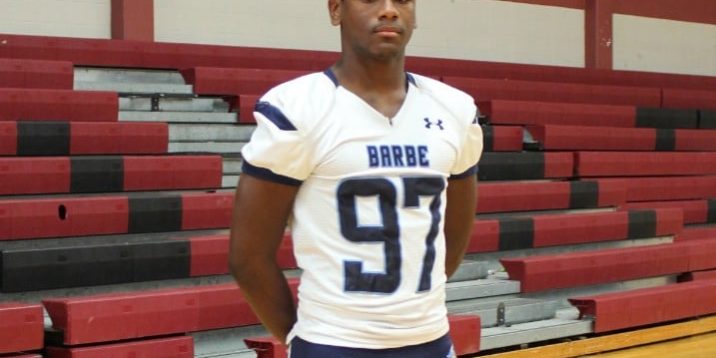 Barbe High School has been a model of consistent prominence in Class 5A for a long time now. Since the hiring of head coach Mike Cutrera in 2011, the program has gone 69-11 in that span. A player that has anchored the Bucs’ defense for the past four years has been senior defensive end CJ Semien. Over the course of his high school career, Barbe went 32-7 in the regular season and consistently competed for a state championship. For a couple of years, Semien has been recognized as one of the top players Louisiana has to offer. After his junior year, Semien was named second-team All-District. In his senior year, Semien was an All-State Honorable Mention and All-Southwest defensive lineman selection. Not only did Semien excel on the field, but he also delivered his best performances in the classroom as well. His academic excellence led to receiving academic All-State honors and the Dr. Landry Scholastic Award.

“Getting recognized for my academic achievements honestly meant more to me than the athletic awards because it shows that I’m more than just a football player,” Semien said. “My family always stressed grades before sports and now that their message is paying off, it means everything to me to have that part of myself to be acknowledged as well.”

“I love the defensive line the most by far just because of the ferocity the position brings while there’s still a certain level of poise and finesse needed to balance it out,” Semien said.

Semien is an exceptional athlete as he threw discus, ran track, and played basketball for a couple of years. However, he decided to focus solely on football.

“I chose to stop playing basketball because several of my football coaches saw potential in me at the next level,” Semien said. “I wanted to maximize my senior season by not having to miss workouts due to basketball practice.”

Semien is a very relaxed and easy-going person, but he becomes a very intense competitor in between the lines. As a competitor, Semien would typically thrive in situations against the best and deliver his best when his best is needed.

“The better the competition, the more of a chance you get to see how well you stack up against some of the best talent in the state,” Semien said. “It allows you to elevate your game to levels you thought you couldn’t reach honestly.”

Throughout his time as a football player, he has taken many lessons to utilize in his life.

“One of the biggest lessons I learned was probably that you get what you put in,” Semien said. “By that I mean, if you devote a lot of hard work and effort into something you want to accomplish or be good at, the results will show for themselves and you can appreciate what you put in.”

As Semien moves on to the next journey in his football career, he will be taking his talents with McNeese State University. As someone who values education, his college decision was heavily contingent upon the prestige of academics.

CJ Semien’s goals are to excel academically and athletically maxing out his potential to be the absolute best player he could be.