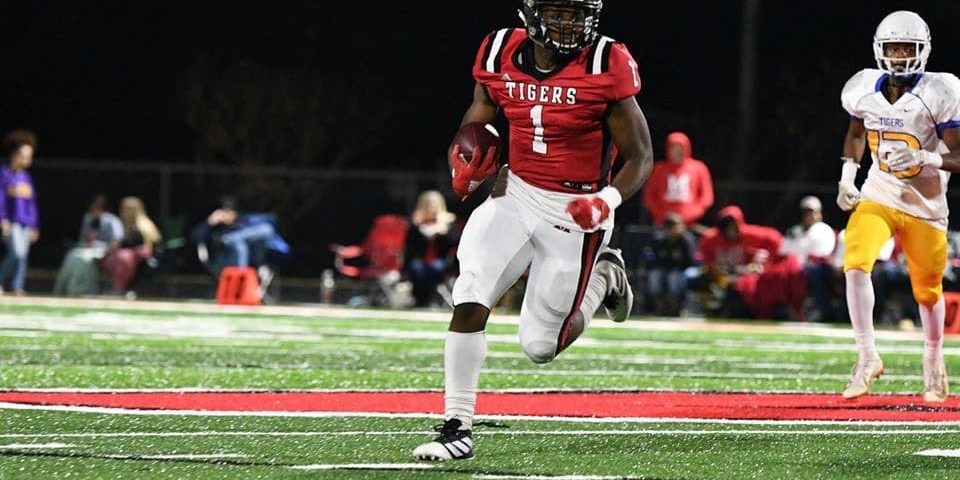 Under Many High School Head Coach Jess Curtis, it seems that every year will feature a workhorse running back for the Tigers. Great high school running backs like AJ Carter (Arizona State), Shacori Williams (Army), and even Ni’Kendrick Carter (FIU) were all powerful runners and helped guide this program as one of the most dominant in Class 2A winning 80 percent of their games over the last decade. That bruising running style tradition has carried on to this season with quite possibly the most talented workhorse running back in the Coach Curtis era, which is saying a lot.

“Terrence Williams is such a humble team first guy,” Coach Curtis said. “Terrence is a guy that could play several positions with his size and athleticism. I look for him to have a huge year in which he can get over 2,000 yards.”

Despite sharing carries over his career, Williams has been one of the most dominant players to ever come through Many High School. As both a sophomore and as a junior, the All-State running back has ran for an incredible 3,742 rushing yards and 71 touchdowns. At 6-1, 225 pounds with 4.6/40 speed, Williams has shown what makes him such a tough player to take on for opposing defenses.

Even though Williams broke out in his sophomore season, it was his junior season that he set himself apart as one of the best running backs in the entire state leading the Tigers to the Class 2A state championship while rushing for over 2,000 yards and 35 touchdowns. Despite the huge success on the field, there was still a big void left at the end of last season.

“The ultimate goal was to win the 2A state championship,” Williams said. “We fell short of that goal by losing to Ferriday High School.”

Being on the other end of the scoreboard in the Mercedes Benz Superdome obviously lit fuel to the fire for Williams this offseason.

“To get that close to accomplishing something that you have worked so hard for hurts,” Williams said. “It fueled me to put in the extra work that it takes to be a champion.”

Not even the Coronavirus pandemic could stop Williams and his goal of becoming a champion.

“The key is to stay motivated and keep grinding,” Williams said. “My brothers were home from college, and we all needed to stay in shape. Thankfully, my parents turned the garage into a gym. We motivated one another as we worked out together. The message that I would give my teammates is to stay hungry and keep working.  We have some unfinished business.”

Although the Tigers did not finish the job last season, there were still a lot of things that Williams saw that will help this year’s team out even more.

“There was a lot of growth during the first three weeks of the season,” Williams said. “We were 0-3, but everyone on that team bought into our goal. We put in the work and held each other accountable as we worked toward our goal. This showed the true character of our team and how focused we were.”

Like Coach Curtis said earlier, Williams is not all about the stats, but he is about winning and making sure that his teammates get just as much credit as he does.

“The love of the game runs deep in Many,” Coach Curtis said. “The work that we put in during the offseason builds mental and physical toughness. It also develops the chemistry that allows us to battle on the field as one. I cannot overstate the value of the offensive line. Every player, coach, and fan contributes to the atmosphere we have in Many.”

For Williams, Many has always been home as his brothers have shown him back when they were suiting up for the red, white, and black.

There could also be a possibility that Terrence Williams continues to play football with his brothers as both ULM and Northwestern State have offered the three star running back. Not only has the Williams brothers’ current schools shown interest in the upcoming senior running back’s services, but New Mexico State, UL, Texas State, Lamar, McNeese State, Utah State, South Alabama, and Nicholls State have also offered him as well. For whatever school, Williams will choose in the end, he will make sure that they will get a good return on their investment.

“When you sign to play at the next level, that college or university is making an investment in your future,” Williams said. “I believe that I am a sound investment. I am a talented athlete, but I am an even better person. I have a strong work ethic and I handle my business on and off the field.”

As far as business is concerned, Williams would love to suit up and play in the NFL on Sundays, but like businessmen always do, there is always a backup plan in case that does not happen.

“The opportunity to play at the next level is a blessing and I am grateful to every school that has extended this opportunity,” Williams said. “My goal is to grow and develop as an athlete while pursuing my college degree. The ultimate goal is to get a degree, but I’d love to play on Sundays. However, after football, I see myself using my degree in business and my competitive edge to become a successful entrepreneur.”

For now, Williams is focused on improving on his overall game for his senior season. Despite the number of great running backs that have gone before him at Many and also statewide, he wants to make sure that he does his own thing.

“Growing up in Louisiana, there is no shortage of great running backs to watch,” Williams said. “I would not say that I try to emulate others. I just evaluate and develop my game to be the best player and teammate that I can be.”

At the end of the day, Terrence Williams is carrying the running back tradition at Many High School based not only on his talent, stats, and other physical skills, but he is doing so by having a great mindset, being unselfish, and doing whatever it takes to achieve the most important finish, which so happens to match Williams’ jersey.

Click the link below to check out Terrence Williams’ junior highlights: