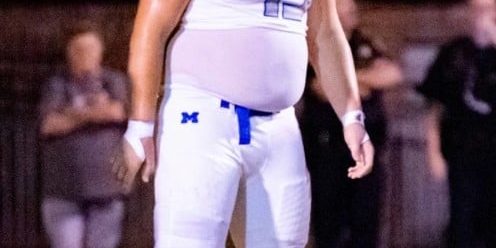 Mandeville High School offensive guard Mackey Maillho has always stood out from the rest of their crowd and for one particular reason.

Because of Maillho’s gigantic frame as an offensive lineman, colleges have started to shown interests in the upcoming senior from Mandeville.

“Colleges that have offered me so far have been South Alabama, Southeastern, UL, New Mexico State, and Northwestern State,” Maillho said.

Maillho’s frame has drawn the interests of many colleges, but it is his upside and what he could do with his frame that could make him a big time steal at the next level.

“I think my leadership capabilities and my strength also set me apart as an offensive lineman,” Maillho said. “Also, for a guy like myself that is 6-8, I could get places quicker with fewer steps. I also take a lot of space so it will take a lot for somebody to get around me.”

Despite being the biggest player on the field most of the time, there are some drawbacks that Maillho is still trying to overcome in order to improve himself even more as a player.

“There are some drawbacks as well,” Maillho said. “For example, if a screen is called and I have to get out in front to catch a corner or a safety, I will not be able to catch them because I don’t have their quickness.”

Not only has Maillho’s size stood out, but his play as a junior stood out as well. The 6-8, 358 pound offensive guard was a crucial part of the Skippers’ improved line play. He also showed that he could go up against some of the country’s most sought out defensive line prospects last season in the Class 5A playoffs.

“One of the toughest defensive linemen that I had to go up against last season was Jacobian Guillory (Alexandria/LSU),” Maillho said. “He was fast and strong, but I thought that I did a great job against him. He did not have a sack that night.”

Accounting for a guy like Jacobian Guillory one on one is certainly no easy task to attempt, but being able to do just that helped the Skippers defeat the Alexandria Trojans 13-12 in order to advance to the Class 5A Quarterfinals against the Haughton Buccaneers. Although the Buccaneers would go on to defeat the Skippers, Maillho knew that 2019 was only going to be the start of something special for 2020.

“The potential for this year’s team is unlimited,” Maillho said. “We have a whole list of returning players including most of the offensive line, the entire defensive line, the quarterback, the running backs, the secondary, etc., everybody is returning. If we have that same mindset as we did last season, I think we could go to state this year.”

Reaching the state championship is a difficult task, but it is a goal that head coach Hutch Gonzales and his team could reach. In order to do so, guys like Maillho have to stand out not only physically, but as leaders. During this quarantine period, the larger than life figure from Mandeville has dedicated himself to working on getting better for the upcoming season in the fall.

Not only is Maillho physically getting in shape, but he is getting mentally sharp as well.

The towering young offensive lineman can also see his future outside of football when it is all said and done.

“I want to major in business and also minor in exercise science as well as kinesiology,” Maillho said.

With a 3.0 GPA and a 21 ACT in the classroom, Maillho has what it takes to get the job done inside the classroom as well. Maillho’s athleticism, work ethic, and passion for the game of football show that there is not too big of an obstacle that he can overcome both literally and figuratively.