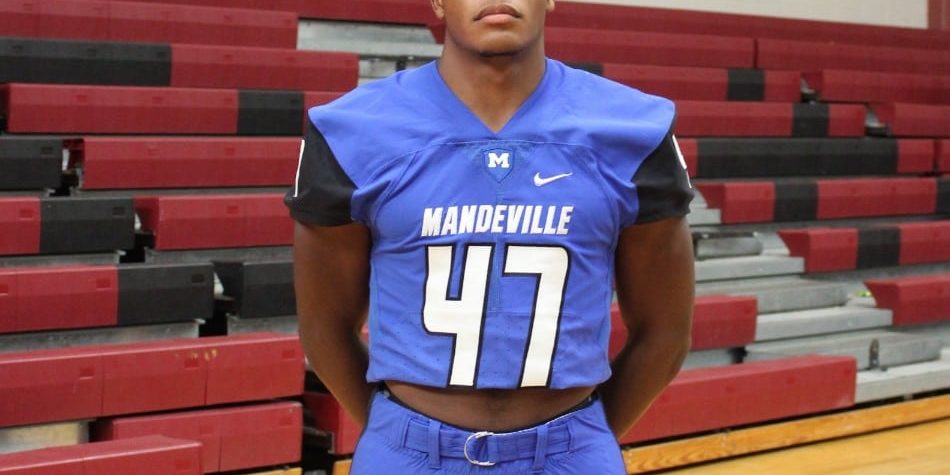 It might have been a disappointing year in regards to Mandeville High School football’s standards as the Skippers lost in the first round of the Class 5A playoffs with a 4-6 overall record. However, there were a few bright individual spots that came from this past season. One of those bright spots is defensive end/outside linebacker Malcolm Johnson. As a senior, Johnson’s efforts helped the Skippers stay in games with some of Louisiana’s most elite teams. Last season, he had 53 tackles, 8.5 sacks, two blocked punts, two blocked extra points, one quarterback strip, and three forced fumbles. In addition to those numbers, he also earned 1st team All-District and 1st team All-Region honors as a senior and was named the team’s Most Valuable Player on the defensive side of the football. It may have been a tough season for the Skippers in general, but for Johnson, he saw this past season in a different light.

“There are a few reasons why it was a tough season, but we all bonded together and rallied with interim head coach Josh Buelle and we made the best of our situation,” Johnson said.

With the way Johnson terrorized opposing offenses, most people would think that the star Mandeville defensive starter may have played on that side of the football during his whole career, but it turns out that he only started playing his current position in his junior year. Louisiana Football Magazine’s recruiting expert Lee Brecheen saw Johnson’s development from starting out on on the offensive line to becoming a star on the Skipper’s defensive front.

“Malcolm Johnson is one interesting player,” Brecheen said. “In 2015, he was an offensive tackle for the team and in 2016, he played at defensive tackle/defensive end. I think he is a middle linebacker for college. His effort is off the charts good. He has got great feet and is a tough player. He already has 4.79/40 speed and has room to grow too.”

Johnson has the speed and motor to translate to the other side of the football, but he also had a lot of help in order to become the type of player he is today.

“A big help in my transition was just great coaching,” Johnson said. “They used my natural athletic ability and put me in the best position to succeed.”

As far as natural athletic ability goes, Johnson indeed has that. He was actually born into a family in which his relatives were more into soccer. His two cousins Rasha Roberts played soccer for Oklahoma and the Jamaican Women’s National Team while his other cousin, Rohan Roberts played soccer at VCU. Even though his cousins were very talented soccer players, Johnson’s love has always been the game of American football.

“I played soccer also but I feel that football is the perfect sport for me,” he said. “Not only does it teach me many life values, but I’ve also formed bonds throughout my years of playing.”

Besides dominating on the gridiron, the 6-1, 225 lb. defensive end was also not too shabby on Mandeville’s track and field team. Using his 4.6/40 speed, he competed in 110 meter hurdles, the 200 meter race, and the 4×100 meter relay .Overall, he placed second in the district and fifth overall in the regionals in hurdles during his senior season. Johnson ran track to really help him prepare for playing four full quarters of Friday night football without getting tired.

“I ran 110 hurdles in track and that helped me so much in the off season by staying in shape and keeping my flexibility,” Johnson said.

In addition to his athletic talents, Johnson also has a lot of musical talents. When he is not terrorizing quarterbacks or stuffing running backs, he likes to play his instruments.

“An interesting fact about me is that not only do I play football, but I also play two instruments: the trumpet and the tuba,” Johnson said.

For men of plenty of talents like Johnson, usually opportunity comes knocking on the door and that is what happened. UNLV offered the All-District linebacker a full time scholarship and Johnson capitalized on that opportunity by signing on National Signing Day to play for the Rebels.

“UNLV is a great program,” Johnson said. “I had a great recruitment with them and a great bond with the coaches. They checked off all my boxes and then some.”

Now, it is time for Johnson to take on another challenge. The Rebels signed Johnson to play linebacker even though he played most of his high school career on the offensive and defensive line. However, Johnson has adjusted to different positions before and is confident that he can do it again.

“Once I get on campus, I’m going to spend as much time as I can learning my new position at linebacker,” he said. “It’s going to be different because I’ve played defensive line most of my high school career.”

There are no specific goals that Johnson wants to accomplish, but he just wants to go out and perform the very best that he can.

“The goals I wish to accomplish at UNLV are simple,” Johnson said. I want to perfect my craft to the best of my ability and get as much coaching as I can to become the best possible player I can be on the field.”

Adjusting to different positions is something that Malcolm Johnson can transition to with ease since he has done it before. You are not going to meet a lot of people more talented than the two star linebacker. The two sport athlete and musician also wants to be an archaeologist when his football career is over, but right now, he is going to put all the cards on the table in Las Vegas.