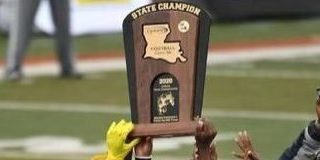 In just over ten years of existence, the Madison Prep Academy Chargers have established themselves as one of the top athletic programs in the Baton Rouge area. The Chargers’ basketball program has won an incredible six state championships and although the Chargers football team has made some deep playoff runs, most notably in 2016 losing to Sterlington High School 28-27 in the Class 3A state championship game under head coach Michael Roach, the team has yet to capture a state championship on the gridiron leading up to the 2020 season.

Although Madison Prep Academy head football coach Landry Williams was coming off two quarterfinal appearances in his first two seasons, he realized that he had both the talent and experience for his team to not only break through past the Quarterfinals, but go all the way and possibly win a state championship.

“When this senior group was a freshman group, I told them that they could win a state championship because they are such a close, tight knit group,” Coach Williams said. “They did a lot of stuff together, hung out a lot together, worked out together, attended 7 on 7 camps together, etc. They did a lot of things together outside of school. That nucleus reminded me when I was at Southern and was a part of that National Championship team. I knew their chemistry would carry to the field.”

However, advancing further in the playoffs was not the only obstacle the Chargers had to try and overcome in 2020 with COVID on the horizon entering the season.

“The main thing was just to make sure that the guys were safe and that they knew how to be responsible,” Coach Williams said. “A lot of the times the kids aren’t with you and don’t know what is going on, but when it got to a point that we were together, it really did help us out. The guys really wanted to have a season because going into it, we did not think we would have a season. Once it was evident that we were going to have a season, then, the guys started to rally together and really competed. Then, along the way, games started to get canceled from COVID and were a lot of other things that happened during the season, but I was glad the guys were able to persevere and stay healthy for the most part.”

Despite everything that was affecting the season in terms of COVID-19, the Chargers stayed focused and had a great regular season finishing with a 6-1 record entering the Class 3A playoffs.

“The thing we talked about was just to go 1-0 every week regardless of who we played,” Coach Williams said. “That was our goal all the way up to the championship game. The guys never looked ahead and just played what was in front of them. The preparation remained the same even before the championship game.”

That 1-0 mindset was crucial heading into the playoffs and the experience of being in those type of games have certainly helped the Chargers reach the state championship game. Along the way, the Chargers had to defeat some of Class 3A’s finest including the likes of Bogalusa, Donaldsonville, defending Class 3A state runner-up Jennings, and finally, Church Point in the semifinals. The Chargers were going back to another state championship and would have to face off a team in Union Parish that ended their season the year before. Unlike last year’s loss in the Quarterfinals, Madison Prep knew that they were up to the challenge of playing a physical team like the Farmers based on their postseason run in playing physical teams.

“It was big because we played a lot of teams that ran the football,” Coach Williams said. “The guys started taking pride in stopping the run. We knew that it was what they were going to do so we knew if we would stop the run, our guys were going to have success. The guys bought into it and showed a lot of pride in stopping the run. Those guys started to make plays and it was because of their work ethic that it made such big dividends for us.”

What also played huge dividends was the play of junior quarterback Zeon Chriss, who accounted for 323 total yards of offense running and passing along with four total touchdowns.

“Zeon flat out played amazing for us,” Coach Williams said. “He came out and was lights out like the rest of the team. Hopefully, we can continue on that same trend.”

After winning the Chargers’ first ever state championship with a 50-0 victory over Union Parish, the team has continued to carry to positive momentum in the offseason, especially in trying to get this special senior group a shot at playing in college.

“Our linebacker Nylen Jones has a chance to play at the next level,” Coach Williams said. “Both Grambling and McNeese are looking at him. Delta State is looking at Andre Haynes, who played outside linebacker for us.”

Jones and Haynes both have a chance of playing at the next level, but there is also another star defender that has already signed to play at the Division I level in Tyrell Raby. After serving under the wings of past Madison Prep Academy DI defensive backs such as Major Burns (Georgia) and Joel Williams (Kentucky), senior defensive back Tyrell Raby lived up the expectations as the next DI defensive back from the school after signing with Memphis while also leaving with a state championship title.

“Tyrell has learned a lot,” Coach Williams said. “The first thing that sticks out to me were his ball skills when he came out as a freshman. Playing with Major and Joel allowed him to really benefit later on. The story is he actually did not want to play cornerback early on and wanted to play wide receiver, but we were really loaded at the receiver position and I needed a corner. He started as a sophomore at cornerback and played well. It took off from there and he is a really good competitor. I wish nothing but the best for him at Memphis.”

Williams also wishes nothing but the best for all of his seniors as they were the catalyst to finally bring home the state championship to Madison Prep Academy.

“This was a great group of kids,” Coach Williams said. “They knew when it was serious and when to relax. They are genuine friends and loved cheering for each other. That is what you need when you are trying to win a championship.”

The program is only going to get brighter as the Chargers’ coaching staff that they have the talent and camaraderie needed to compete for more championships in the future.

“The future is going to be bright because we have coaches that are willing to put the work in,” Coach Williams said. “If you want to be around this program, you have to be willing to put the work in and now you are going to have to work harder than before because you are the hunted. I think we have a great nucleus coming back with guys like defensive lineman Quency Wiggins, quarterback Zeon Chriss, and offensive lineman Ronald Harris. It’s all about putting in the work to get back to where we want to go.”

Hopefully, for the Madison Prep Academy Chargers, they will be back to shock the rest of the competition en route to another state championship in 2021.