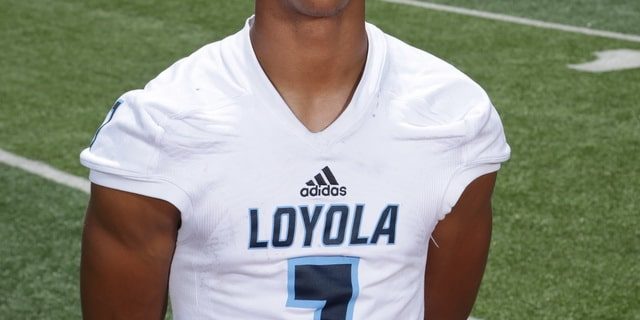 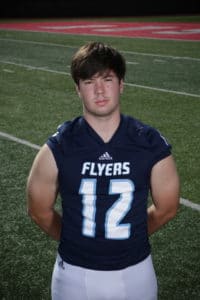 There may not be a better similarity between a team’s mascot and a team’s offensive philosophy than what the Loyola College Prep Flyers want to accomplish and that is letting the football fly through the air. Loyola College Prep Head Coach Steven Geter does a really good job of adjusting to the talent that he has on his team. In 2015 and 2016, the Flyers did a great job offensively of incorporating the running game with power runner Ethan Stansell. Now, in 2018, the coaching staff is using the talents of one of the best quarterback-wide receiver combos in North Louisiana, which features senior quarterback Jacob Allen (5-10, 186) and senior wide receiver John Williams (6-0, 167). Both players are two of the most productive in program history. Allen is a two time All-District player and a District MVP. Williams is the all time program leader in catches and yards. Williams is also an All-District player and has been named the school’s offensive MVP as a junior. Louisiana Football Magazine’s recruiting specialist Lee Brecheen believes that both are great players for the program and have a lot of potential.

“Jacob Allen may have the strongest arm for any quarterback that is under 5-10 in height in the state,” Brecheen said. “After watching him, if he was 6-0 tall, he would be getting a lot of offers. Jacob can be a D-III superstar because he has a cannon for an arm.”

“John Williams has SEC ability,” Williams said. “Williams has great hands and runs really good routes. He reminds me of Russell Gage (Redemptorist/LSU/Atlanta Falcons). If he was playing for a bigger school, he would be getting some SEC offers.”

Brecheen has high praise for both players, but the people who have even higher praise is each other. Both players realize that they could not accomplish their goals without each other.

“I’m very blessed to have a receiver like John,” Allen said. “He creates a lot of problems for defenses and they have to decide if they will double team him or not and if they do, it only opens up our offense even more.”

“Jacob is a good friend of mine on and off the field, which is important to how we relate on the field,” Williams said. “His ability to trust in his guys outside makes him great. He has great anticipation when we come out of our breaks. Jacob constantly is involved with being a better quarterback and teammate. He reaches out to us about film he saw and matchups we can win and never takes his mind off the game.” 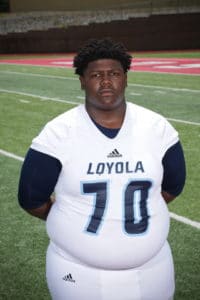 As good as this duo is, they would not get the job done without the play of their offensive line. Senior OG Cameron Myles (6-2, 315) actually controls the front on not only on the offensive side, but on the defensive side as well.

“Cameron Myles plays both offensive and defensive line for the team,” Brecheen said. “Depending where he goes is what position he will play. If he goes I-AA, he can play offensive guard. If he goes D-II, he can play either defensive tackle or offensive guard. If he drops some weight, I think he can prove a lot of people wrong. Losing about 15 pounds will make a huge difference because he has good feet already. If he can get around 300 pounds, he may end up playing for a small DI college.”

Myles’ versatility, size, and his mindset to dominate the competition is a huge component of this Flyer football team.

“I am powerful with full of aggression and bad intentions when I block or tackle,” Myles said. “I have very quick feet and fast hands.”

These three seniors are getting the most college looks as of right now. John Williams has already received a preferred walk on with Louisiana Tech as well as an official offer from Mississippi Valley. Both Jacob Allen and Cameron Myles are receiving D-II and D-III interests. Even though these three players are getting some looks by colleges, Brecheen believes that there are two more players that potentially could sign in the end including one with an amazing story.

“There are two more players that I scouted that potentially can sign in the end are Matt Ramsey (5-10, 175) and Alec D’antoni (5-10, 190),” Brecheen said. “Matt Ramsey has an incredible story himself as he battled and defeated cancer. Last season, Ramsey had 99 tackles and 11 tackles for loss. He is on pace to break that this season and is also playing running back to boot. Alec D’antoni is a linebacker/fullback that can run about a 4.7/40. If both players decide to play at the next level, they would be D-III stars.”

This year’s Loyola College Prep team seems to have a combination of different things. They have a great aerial assault attack with Allen and Williams. They have the physicality of a Cameron Myles as well as the leadership and toughness of players such as Matt Ramsey and Alec D’antoni. With all of those factors in mind, the Flyers are riding high heading into the final week of the 2018 Louisiana football regular season with a 6-3 overall record.

“I love what we have done this season,” Allen said. “We are a very explosive offense and that’s due to our dynamic receivers. I feel like we should be undefeated. No team so far has just beat us. Our losses have been self inflicted and that’s a very good sign!”

“I think with the young secondary we created over this past offseason, they did very well,” Williams said. “With the veteran offense we have, I like the chemistry and strengths we took advantage of in our drives. We definitely want to tie for district championship and end our regular season with a win and a district cup.”

“We have played well all year and that we’ve killed ourselves on some of the losses, but it’s about bouncing back and not losing focused. We are going to make a run in the playoffs in order to try and win state,” Myles said.

The Flyers look to head into the postseason with so momentum as well as an overall 7-3 record. Their last regular season challenge of the year will come against the North Webster Knights.

Earlier last week, Brecheen was able to speak on one with John Williams about what schools he is considering at this point in last week’s edition of recruiting tidbits. To check it out, click the link below.

Also, to find out what schools are pursuing Jacob Allen and Cameron Myles, make sure to check out our Recruiting Tidbits this weekend!